I have been working with Gremsy to improve AP’s support of their gimbal and it’s at the point where I’d like to get feedback from any willing beta testers on the improvements.

Of course please be careful with this firmware because both the AP firmware and the Gremsy gimbal firmware are works-in-progress and haven’t gone through the normal beta testing that we do before stable releases.

BTW, I’m also happy to look into other gimbal issues people are facing and perhaps I can resolve some of these as follow-up changes to the Gremsy driver changes.

For reference the Pull Request for this change is here.

Any chance this would work with the MIO?

Yes, it works with the MIO as well. Sorry I didn’t include a link to the MIO v7.7.1 firmware but I have now.

@rmackay9
this is great I have been hoping gremsy would get some support as they are one of the only gimbal suppliers with a nice range of sizes! I will be testing this at the end of the month currently out on a assignment.

Ok, so I’ve got the preview firmware installed on a Gremsy MIO and loaded the customized ArduCopter build onto a Cube Orange. I built this from the rmackay9:gremsy-driver2 repository since the link in the original post doesn’t appear to be live.

I can see the startup message, so communication between the flight controller and gimbal should be configured properly. Though I can’t seem to control the gimbal at all - RC targeting and “Point Camera Here” have no effect. Setting the mount mode to “Retracted” doesn’t disable the motors either.

Any thoughts as to what I may have missed?

Txs very much for giving it a try and sorry about the firmware link. I’ve fixed the link now.

My guess is that there’s something on the gimbal side that’s causing the problem. For example even though it’s clearly communicating over MAVLink it’s still taking target angles from the RC.

I wonder if maybe upgrading the firmware has wiped all the parameters from the gimbal and it won’t move at all. Could you perhaps try controlling it with a regular RC somehow? I guess to do this you need to change Settings, Controls to “SBUS”

By the way, on my PixyU, I’ve got the Settings, Controls set to “SYNC”.

I’ve asked my contact at Gremsy to test with the MIO.

Thanks Randy, looking forward to seeing if Gremsy has better luck.

I think you’re onto something regarding a gimbal-side issue. If I revert the parameters and mount type to support the MAVLink control I was using previously, there’s still no response from the MIO that’s been updated to the preview firmware. I popped in another MIO that’s still on an earlier release and that works fine.

I didn’t see anything in the updated gimbal’s settings that looked like it was wiped or reverted at first glance, but I’ll keep digging in the meantime.

We have several T3v3’s in regular use with AC. I can’t offer to help test beta firmware on these machines sadly, but it’s great news this is being worked on.

Does anyone know if it’s possible to read the current angles from the gimbal, rather than just setting them? e.g. if controlling pan / tilt via a separate SBUS receiver, is there any way of getting the mount angles on the ground station?

With 4.1.5 <= ArduCopter <= 4.2.1 you can use the mount_control.cpp mavros plugin (master) to do that. It reads controlls the setpoint and reads back the current angles and publishes errors on the ROS diagnostics topic.
But you do need to keep it MAVLink only, no SBUS.

With the new Gremsy driver the gimbal’s actual angles (not the targets) are sent to the GCS using the GIMBAL_DEVICE_ATTITUDE_STATUS message. I don’t know what will happen if you try to control the gimbal with a separate RC though.

@juzzle1 You can take a look at our gSDK based on MAVLink.
To control gimbal with external RC and keep MAVLink connection to retrieve gimbal attitude, you need to set gimbal to rc input

@amilcarlucas @rmackay9 @Minh_Le Thanks for your replies. This level of integration is really fantastic!

@rmackay9 It seams like the mavlink stream from the gimbal currently prevents GCS failsafe triggering.
I think I have a fix locally, will post the results later

Thanks very much for the feedback. It is certainly possible that a new MAVLink device could cause the GCS failsafe to not trigger. If there’s an issue I don’t think it will be related to this new driver but rather an existing issue.

For example, here’s what I see from MP’s mavlink inspector and there are a lot of devices so the SYSID_MYGCS and SYSID_ENFORCE parameter probably need to be set in order to ensure the vehicle’s GCS failsafe isn’t fooled by, for example, the Herelink receiver which would keep sending heartbeats even if I disconnected Mission Planner or powered down the herelink transmitter. 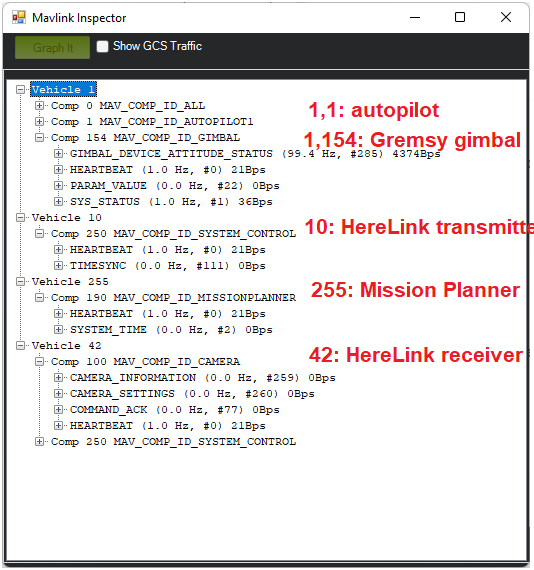 EDIT: I see you’ve raised a PR here and it does look like an existing issue and there are various solutions we can discuss on the next dev call.

We merged the Gremsy PR this morning so within a few hours testers can load “latest” to test. if using MP, go to the Install Firmware screen and press Ctrl-Q, then confirm the version displayed below each icon is 4.3.0-DEV and then push the icon to install.

Hi all, anyone else have a chance to test this PR on a MIO yet?

I’ve ping’d the Gremsy developer … he’s been fixing other little issues so I hope/expect he’ll get to this soon-ish. 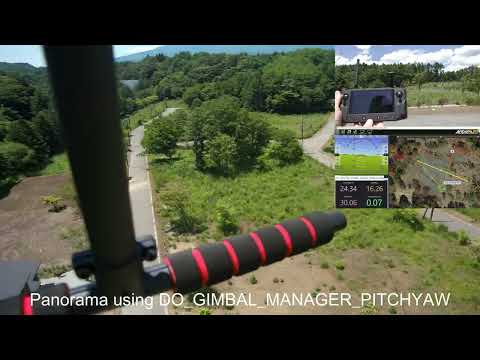 People have probably already seen this but in any case, here’s a demo of what is in “latest” (aka “master”, aka “Copter-4.3.0-DEV”) on a Gremsy. By the way, this should work for all gimbals AP support (PWM, AlexMos, SToRM32, etc)

The next enhancements planned are:

I am running some bench tests on a Gremsy T3V3 and a CubeOrange. I have managed to get the gimbal to connect & mount to the Cube. Using MP I can also make the gimbal ‘look’ at a target using the ‘Point camera over here’ command so the AP talks to the Gremsy gimbal.

The issue I am having is the ‘Set Mount’ commands in MP appear not to work for me. This is probably linked to the Gremsy not showing up in the Mavlink Inspector as MAV_COMP_ID_GIMBAL. The Gremsy does show as ‘Mounted’ in the messages window.

Does anyone have a suggestion what could cause this and how to resolve the issue?

Thanks very much for giving this a try!

So it’s the “Set Mount” button that you’re trying to use I think. It may not be clear but all this does is change the gimbal’s mode using the drop-down just to the left of the button. 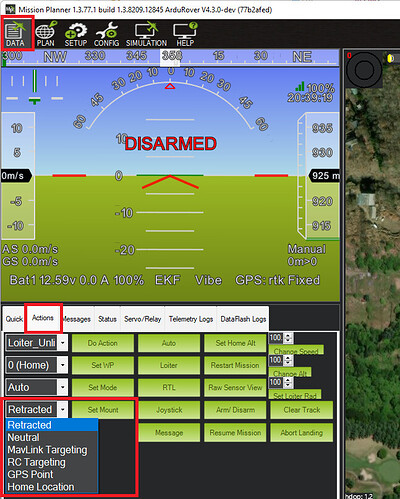 By the way, the intention is that “Retracted” mode will relax the gimbal but Gremsy hasn’t made the update to accomplish that yet.