I am totally new to rc but have some robotics, linux, and programming experience. I also used to teach a grade school robotics class which I learned a lot from. I came across and acquired a fully functional marcbot iv. At a distance it looks like something complicated but it is basically a glorified rc truck on milspec batteries. As far as I can tell it uses an 9 channel system and has only one channel not in use.

In addition it has a fairly low res video on its own separate receiver antenna.

I believe the main receiver is 72 mhz with pcm and video not sure.

The robot uses 2 24v bb2590 batteries but somewhere in there it takes the voltage down to 15.4v and that goes the esc which is currently a traxxas 16.8v esc attached to a single 550 motor which drives a 4x4 gearbox.

Battery life is effectively a non issue as it has 6 hr drive time on these batteries. In fact the batteries are really the best part of the system it seems.

I have not been able to get an overall idea of what all I need to get this working on autopilot so I figured I would ask for some advice on what autopilot module would be best for this vehicle? I do not have a huge budget but do not mind saving up for the best fit if it is achievable. 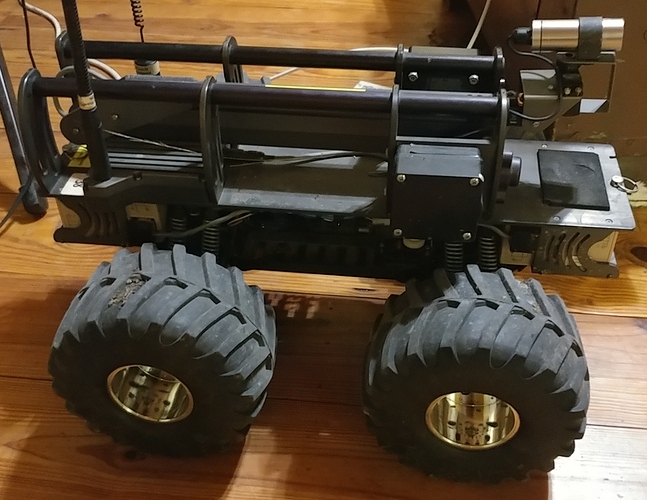 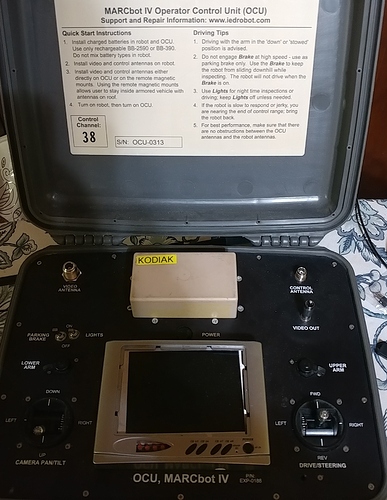 I have read a lot about where to start but I am in analysis paralysis on the first step. Thanks for any advice.

That’s quite an impressive vehicle you have there. Is there any documentation indicating what the Receiver output protocol is? These signals would need to be connected to the Flight Controller which would then provide control signals to the drive and other components. How much package space is there for a Flight Controller? And when you say “not a huge budget” what price range would that be?

Thanks for your fast reply. I had this photo handy from when i took apart the vehicle…it looks like it says pcm 224 or something…is that the info needed or where should I look?

About budget, just the more it would cost the longer it will take me to complete it but I could spend 5 or 600 I think at the moment. Or wait a bit and save up more either way.

By package space, do mean like physical space on the robot? It had a lot of places to put stuff so I think I can squeeze stuff in several places. The aluminum chassis also seems easily extensible if I needed to attach brackets or something although I am trying to minimize irreversible structural changes but that goal is secondary.

Also I am not sure what this 8/9 on the last photo means. Maybe this is only an 8 channel i am really not sure yet. 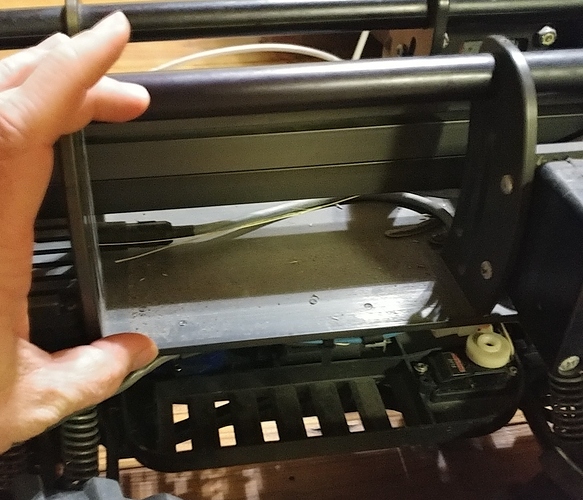 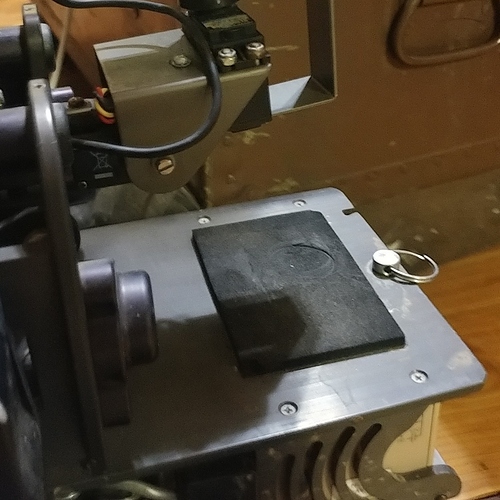 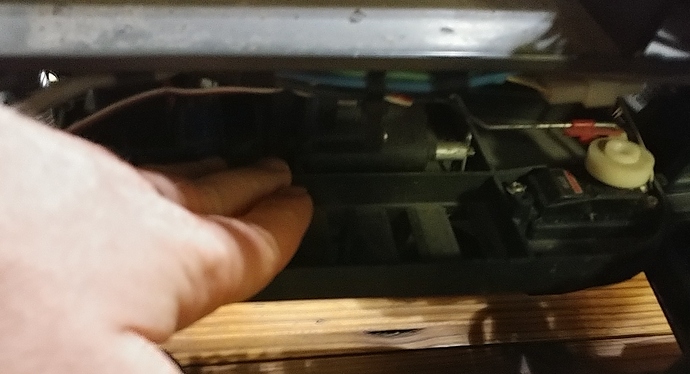 Here are some places to put stuff. I think the bottom rack was for batteries on the marcbot 1 - 3 and that space is on both sides.

Futaba PCM1024. A better photo of that would help. You will not be much limited in the Flight Controller and accessory components with that budget. Hex Cubes, a couple different offerings from CUAV and Mrobotics would be good choices.

What drives the arm articulation? Motors or servos?

Sorry about the photo. I will get a better photo when I open it up again soon. That one I took when I had not a good angle.

The upper and lower arms are (apparently to me) large geared stepper motors and camera pan tilt is articulated by two typical servos. There is a custom board inside that I am pretty sure only interfaces with the steppers. Everything else seems to be straight from the futaba which would make sensed based on my limited understanding. I think the steppers may be the only real nonstandard rc thing on here.

More photos of stepper motors on arm. Operates much like those springy desk lamps of yore but without springs. 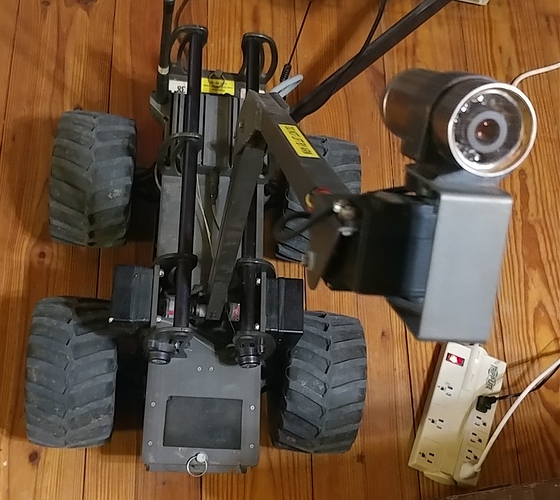 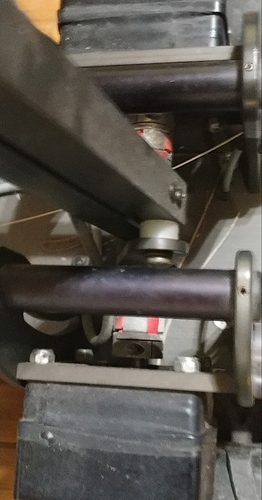 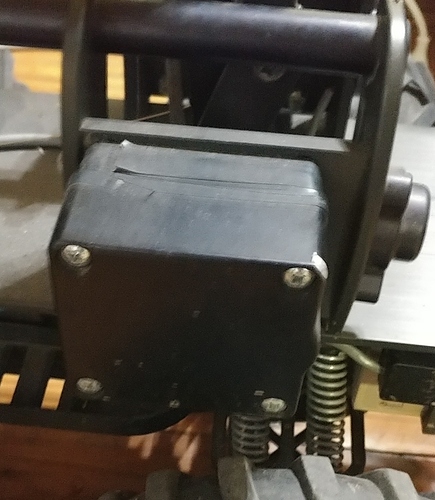 OK. So I would imagine that you only want autonomous control over navigation with other functions remaining manual?

Probably at least to start. Is there precedent for automated arm/camera usage for navigation? We dont drive with the arm up but often stop and look up and over tall grass to see if we can make it without getting stuck.

Main starter goal is to have it be able to run a plotted course for a patrol and would like to later use ROS/opencv to have it recognize and alert for suspicious objects or people.

So eventually I would want it to stop periodically and look up down all around automatically to take in data and send back snapshots of anything odd it found. Which I think I can handle that in ROS if i can get the rest working and not paint myself in a corner with inexperience. 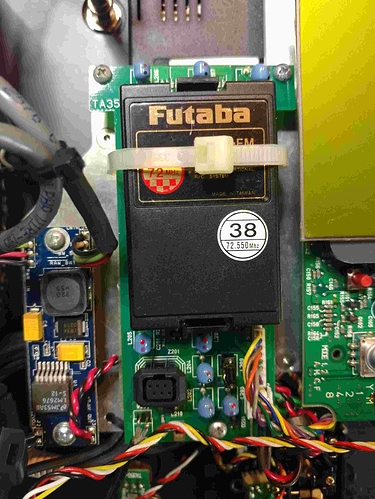 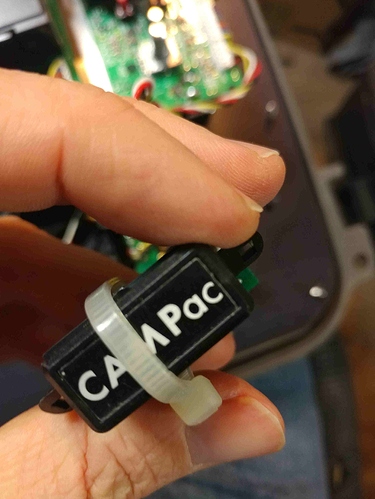 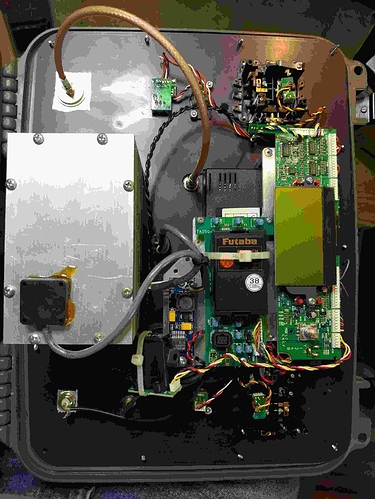 Photo of controller internals for reference. I am hoping this is all standard enough it would work with ardurover.

I suppose it will. All modern Flight Controllers require PPM or Sbus input and that Receiver is probably too old for that. Some “seasoned” hobbyists familiar with the old 72Mhz stuff would know. So you may need an PWM to Sbus/PPM converter. Not a big deal.

Wondering if you’ve managed to get anywhere with this system. I also have a Marcbot. It’s a model IV. Not sure which you have. The Marcbot IV was quite a change, as I understand it.

Looking to convert mine to a more modern control system, since I don’t have the original control unit. I have experience with ardupilot. Thinking of changing it to a pixhawk rover, however the current control system and arm controls are very high quality and would like to retain whatever I can.

Just wanted to check in and see how you’ve gotten along on this. Don’t see many others around, unless it’s police or university.

Would very much like the to compare notes and information.

I haven’t been able to get back to this other than I lost the motor controller (quit functioning, the ESC thing) and successfully replaced it. In the process of diagnosing that, I found a loose cable that was preventing the parking break from working. I now have all features functioning, but was unable to figure out what the fried capacity on the board was supposed to be doing? I even emailed the original engineers who wanted to help me but corporate told them they couldn’t support it anymore.

I have a MARCBOT IV too. The controller I have is the original, not the ‘updated’ wifi. The original spec for the MARCBOT IV was it had to be deployable in under a minute…I am assuming that went out the window when they attached laptops to the controllers etc!

I can definitely send you some info on how the controller works since I have the functioning original controller. I think (fortunately for you) all the ‘brains’ behind the stepper motors in the robot itself, not in the controller. Controller appears to be a bunch of standard RC controller mechanisms put into an indestructable aluminum and plastic case.

I think their job as an IED robot explains why there are so few of them around for sure.

I have not really done much work on the MARCBOT since last year. Thought I’d check in to see if you have. I’m once again looking for a winter project and going to start to work through the system. I have the MARCBOT IV-N btw. It’s the one that was changed for possible use by NASA also. The boards look quite a bit different. I think I have the laptop controlled unit.

Any luck so far?

Ok so based on my past research you must have a wifi communication system that uses a laptop’s wifi instead of regular RC controller. So shorter antenna’s on the robot, right?

The original spec of the MARCBOT was to be deployable in under 1 minute which obviously is not possible if you are booting up a laptop but NASA wouldn’t had had that requirement so I guess that worked for them. Do you have a photo of your board in the robot? I would be surprised if they replaced the whole control board just to make it wifi-controlled…in my past robotics classes we commonly took RC controlled boards and spliced in an arduino right into the rc inputs (can’t recall exactly how we did that but a few google searches was all it took for me to get the info on how to do it). It seems it would have been a total waste of money to replace the whole board with another (what would have had to have been a custom-built) board.

Are the boards different because there’s like an attachment or addition to the original board or does it look like a totally different board?