Hello team and thank you in advance for all your hard work.
Today i calibrated a new build with Cube 2.1 and Here + module.
Cube is isolated with a grounded copper from the distribution board and Here+ is about 10cm higher than Cube and also isolated via grounded copper. This rig has not flown yet, but simply tuning on the bench, calibrating and getting ready to do first flight.
I took it outside and allowed Cube to warm up and for the GPS to have 16-19sats and really low Hdop in order to run an initial compass calibration. I must say that before this i run a strapped to the ground motor/compass calibration in full range of throttle almost in order to assist compass calibration for better results.
I tried strickts and it failed almost 3sec into the calibration and i tried default and it worked but i noticed values on internal compass 2 running (one of them) around 300 and the same on external compass. Since the only other time i had encountered something like this was due to a magnet on an arduplane wing, i would like to ask what could an acceptable value for flight since on the i found on wiki talking about 3.2.1 that anything less of 600 total length is acceptable. What do you suggest i look into so that i can do strict calibration?
P.S. same type of build with the same grounded copper isolation have been working fine and giving offsets that never go higher than numbers such as 40-80

If you use QGC to calibrate your compasses using online calibration it will tell you at the end of calibration: 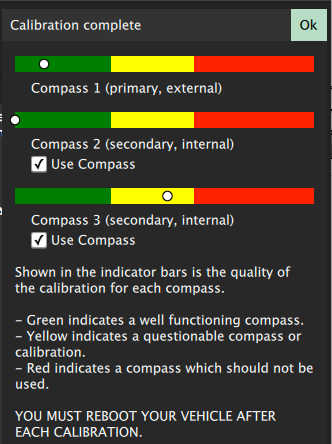 @DonLakeFlyer
Thank you for your reply. I dont use QGC, since i have worked for years with MP and find it easier for tuning, while when i have used QGC i find some parts easier on designing Auto missions.
Since MP does not have the same bars, but does have the coloring on the Offset letters, i can see mine are Green, which most likely means acceptable, but yet i would like to know what good values are, based on developer and not what generally works on people. So far my highest number has never been more than 95 and looking at 300+ on a signle number and not the full length of the compass, has me wondering. Simply asking the question to be on the “safe” side of things.

I think 300 is completely fine. Some of the offsets especially on internal compasses come from metal bits within the flight controller itself so there isn’t much that can be done about that.

@rmackay9 Thank you for your responce. fingers crossed and i am headed for some testing.