Wondering if a lipo battery of this size & power could potentially fry the APM 2.8. Here’s what I want to buy: 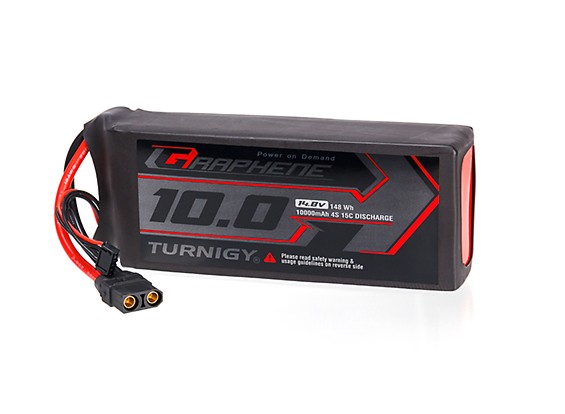 Power Module that I already own: 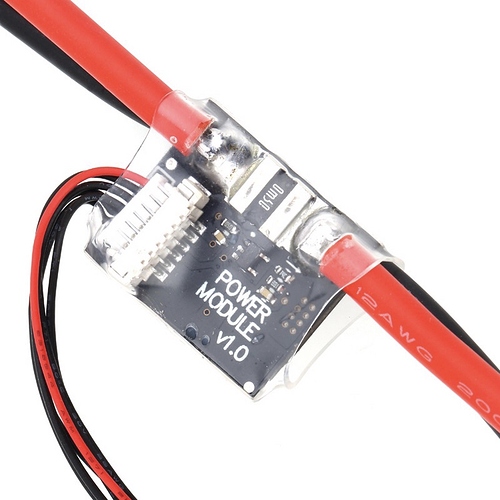 Thank you very much for your reply. If I’ve understood the calculations correctly the power module I have outputs 3A average. With this online calculator it shows the following results for a 10,000 mAh lipo: 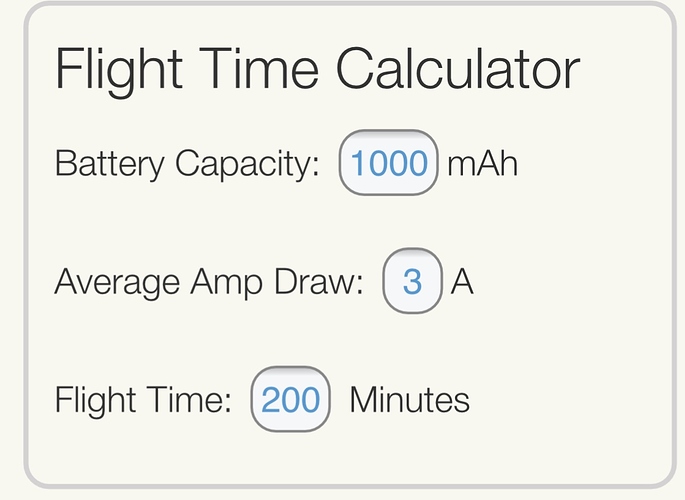 Would it be safe to say that the battery I’m after would give 200 minutes of flight time?

Up to 3A is what the power module can supply to the Flight Controller to power it and peripheral devices, it has almost no significance with respect to flight time. That is primarily determined by the power the motors require to fly the craft.

Note that technically you could fry that power module with that battery (but not the flight controller). It’s a 10,000mah battery rated at 15C, so it’s capable in theory of giving out 150A, more than the 90A that power module is rated at. (Also why the battery has XT90 connectors, rated at 90A which is still under 150A but a least better and probably ok for brief current surges).

As Dave says above, flight time (and also max power consumption) will be primarily determined by your motors, everything else (weight, etc …) the same. Drawing more than 90A would imply your motors can draw more than 90A/4=22.5A, assumming a quadcopter. So it will really depends on the vehicle type and motors you plan to use.

In practice I’d go for a higher rated power module if you plan to use motors that can output more than about 25A, at 4S. Perhaps more as most battery makers are notorious for overstating their maximum current draw specs. In any case you’ll me fine under that number.

Thank you for your explanation. It’s starting to make more sense how I should go about acquiring more power for the apm. Would this be a better option for the power module? This is a high voltage APM power module with 3A UBEC. The APM 2.5/2.6 power module is a simple way of providing your APM 2.5/2.6 with clean power from a LiPo battery as well as current consumption …

Also another question but I have read that you can’t power the apm & the motors of the vehicle through the APM. It talks about ESC, what is that? Many thanks again for your advice

Yes and no. Yes because this one would allow you to run with a higher voltage battery like 6S instead of 4S, so motors would draw less current at that voltage, assuming chosen motors are 6s capable. But if you stay at 4S it won’t make any difference. Check wiki for power module options.

Edit: the first one you showed is actually rated at 30v, so no, no different. I first thought it was one of those rated for 4s max, which it might actually be as the listing is self-contradictory, says max 30v but then says max 20v.

Like a lot of these cheap modules those are probably the same. As far as 4S goes they are anyway. Just use what you have. I don’t know what you mean by “acquiring more power for the APM”. This makes no sense. You choose the power requirements based on several factors. Motors, ESC’s. Props and all-up-weight.

Hi dkemxr, I’m not making sense because I have no clue what I’m doing ;D well basically right now I have the APM 2.8. I have nothing else wired up to it apart from a GPS module.
I want to build a rover and was thinking of going for the Wild Thumper 6WD: 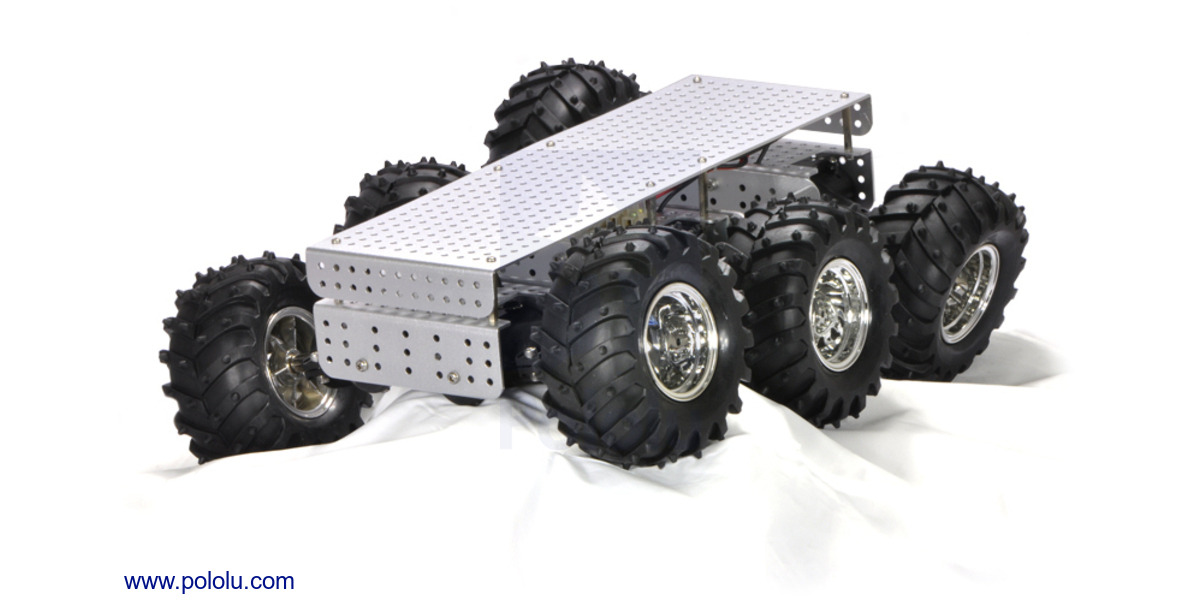 This rugged, 6-wheel-drive chassis from Dagu Electronics has independent suspension for each of its spiked 120mm-diameter wheels, allowing exceptional traction over uneven terrain, and its body is made from 2mm-thick anodized aluminum with a...

Not sure how to power the motors and get them communicating with the APM. Does it all get hooked up together and power comes from the APM or does this 6WD rover require separate Lipo batteries connected to it? That’s why I said more power to the APM so I’m guessing now that the power supply for the rover motors would need to be separate and only the connections with the APM & motors are purely for movement of the wheels and not powering the motors themselves. Have I got that part right?

Maybe it’s better for me to stick with the power module that I already have and buy another 4S battery to then be used with this: 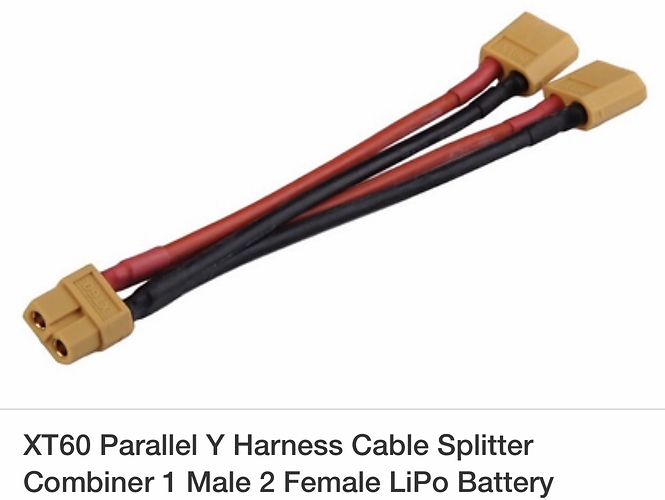 It can run in parallel so it doesn’t overload the power module. Maybe this is a better way?

Ah a Rover. You have posted in the wrong place. We assume because you posted in Arducopter that it’s some type of multirotor or traditional helicopter. Start reading here and check out the Rover section of this Forum.
http://ardupilot.org/rover/index.html

Anyway motors need speed controllers, only the control signal comes from the Flight Controller. That Rover has brushed motors so you would need brushed motor drivers. It’s setup for 2 channels in a skid-steer configuration. One of the the Pololu motor drivers that is linked from the product page would be a good choice. You will need a 2S battery also, not a 4S. You could parallel 2 2S batteries if the battery mounting arrangement makes more sense with 2 batteries.

You will be spending quite a bit of money on this I would suggest you use an up to date Flight Controller rather than the old APM.

Ahh sorry I didn’t realise I was in the wrong section. Is there a way to change this or should I just keep the post here?

You could parallel 2 2S batteries if the battery mounting arrangement makes more sense with 2 batteries.

Is what you’ve described above for powering the APM? So basically I couldn’t parallel 2 4S battery’s? I would have thought it still outputs the same amount of power as 1 battery instead of a combined output. When I looked at a YouTube tutorial the guy put two batteries together but the output was the same as one battery. So he had he’s desired output but the batteries just lasted double the amount of time

I have just moved your post to the Ardurover/miscellaneous section.
You should get more relevant views here.

Read the wiki and check out this build thread.

Hi all, After posting here a few times for guidance I thought it time to show the fruits of my labours.   This project started as a wracking of brains to con…

Yes, batteries in parallel have the same voltage.But I’m telling you that the motors are only rated for 7.2V

Ahh yes I’ve seen the information regarding the thumper motors:

So does that mean I can only power it with lipo batteries of up to 7.2V? I can’t use a bigger amount to power it up? Sorry for these stupid questions and thanks for your patience.

So I would be able to power the rover motors with this battery?

And if not, is it possible to add something similar to the APM power module to sort of down step the voltage & amps so it doesn’t fry the motors?

Also regarding this rover which is amazing all I need to do is get the rover/apm working for missions that follow waypoints. He’s is much more complicated and doesn’t show a basic tutorial of how he’s hooked it all up.
So basically I just want the rover with the motors & the apm hooked up. If I can get that working then I will buy the following but I’m not sure which one to go for:

THis is a combo pack of the incredible Pixhawk 2.1 (the cube) autopilot along with the all new Here v2 GNSS module which raises the bar for commercial navigation solutions. The pixhawk 2.1 is the l…

Or do I buy this one:

No, you can’t use a 4S battery the motors are only rated for 7.2V so 2S. It’s not practical to step down the voltage of a Lipo battery as you arre suggesting because the current requirement is high. If you need the capacity or the assembly of the vehicle makes more sense to use 2 batteries then you can parallel 2, 2S batteries.Note that the other builder used this battery setup.

The Pixhawk 2.1 Here2 combo would be an excellent choice. Speaking from experience (I have a Rover) you want a good quality GPS module because being on the ground is a lot different than being in the air with respect to satellite reception and avoiding obstacles on an Auto Mission. A few meters off a waypoint in the air is no big deal while on the ground it could be a big problem.

The thing is I want maximum drive time whilst in the autonomous waypoint missions. How would I go about getting 4 hours or more of drive time?
What kind of battery setup would I need to produce that & is it even possible?

The only way to know that is to determine what the cruise speed current is and then determine if the vehicle will fit a battery(s) with the capacity to do that. Buy a 2S battery that will fit the vehicle and do some testing. My guess is that vehicle is too small to fit enough battery capacity to run for 4 hrs.

But lets just say that each motor will draw 2A at mid-throttle position. So 12A total or 48,000mah for 4 hrs. You only want to pull 85% of capacity from a Lipo pack so you will need ~56,000mah of capacity. Do you think there is space on that vehicle for that much battery capacity? Be realistic.

Damn when you put it like that then no there’s no way. So what would you suggest I do? Not sure how to locate a rover with motors that can give me what I need. There’s other Rovers I’ve seen with big battery packs but this guy is charging like $4,000 for one frickin rover. 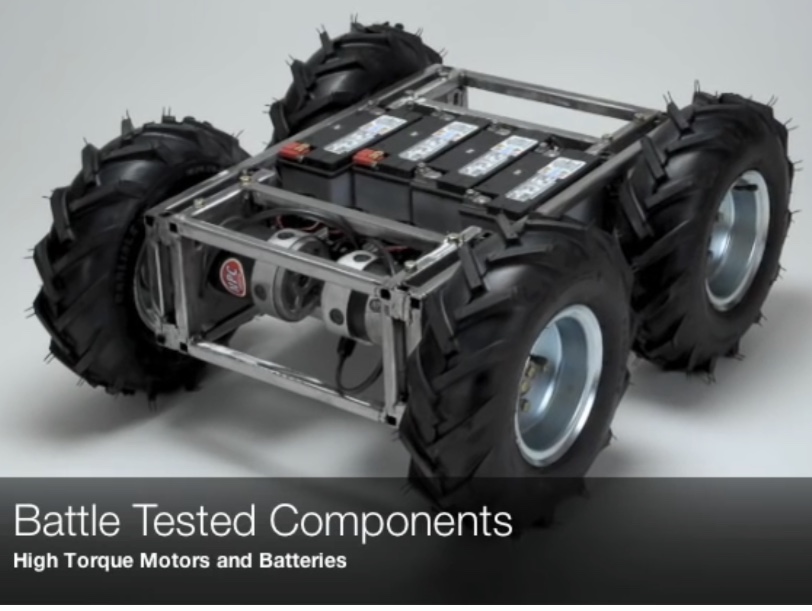 Check out this, it’s got some serious motors and batteries to boot.
But realistically if we’re talking about the Wild Thumper 6WD that I’ve mentioned what’s the best drive time I can expect from a realistic setup with the space that’s available? I know it’s hard to say but your rough idea would be appreciated