Hello there. I am using a Radiomaster TX16S Max and an ELRS receiver configured as a CRSF RX, and trying to set up the flight modes in Mission Planner via channel 5 (RC5). I have done this before with Futaba receivers, and everything worked well. The problem that I am encountering now is that the AP sees the SC switch (which is a 3-way switch) as a binary switch… it only sees the extreme positions as 999 and 2000, and it’s ignoring the middle position. RC5_OPTION is set to 0.

I have calibrated the radio, so I don’t think that’s the problem. When calibrating the radio, toggling SC between Min-Mid-Max causes the green bar on channel 5 to only toggle between one extreme (999) and the other (2000).

This is also not a hardware problem. For example SG is mapped to channel 7 and appears as a 3-way switch. I can see it goes through 1500 in the middle position. However if I map channel 5 to SG, then that switch is then seen as a binary switch too!!

I am stuck. What is going on? Is this a regression in AP? Or am I doing something wrong in Mission Planner?

What is going on?

On these radios flight modes are usually assigned to the six buttons under “RADIOMASTER”.

However, not showing 1000/1500/2000 is strange. I guess internally you could see a switch with three contacts, with possibilities middle to the extremes or open. You can open the radio and check that, measuring resistance between extremes and middle (radio off) and voltage levels on middle (radio on).

Or am I doing something wrong in Mission Planner?

More likely something wrong with the switch mix on the radio. But as @Webillo says everyone uses the buttons for Flight Modes. It’s simple to configure with a curve.

So… I tried using the 6P switch (buttons) as well. I get a similar behavior… the first three buttons map to “999” and the last three map to “2000”. So switching back to using the SC switch, I think my inputs and mixes are fine, unless I am missing something fundamental about what AP expects as far as PWM signals here: 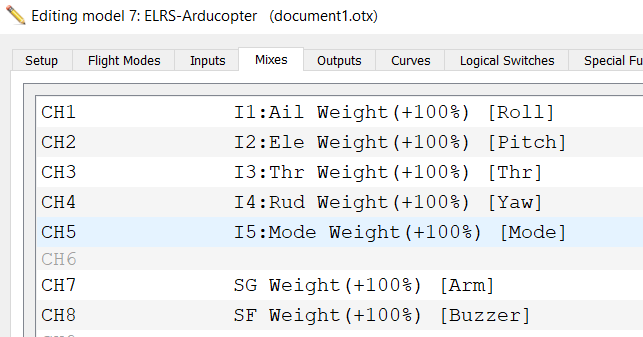 The EdgeTX simulator shows that the channel outputs are actually correct, both when using SC as well as when using the 6P buttons: the PWM signal goes from MIN through MID to MAX as expected. So I am thinking the problem is downstream, either in the RX (??!), or in AP’s interpretation of signals on Channel 5.

In fact I followed the tutorial here just now to make sure I am not missing anything, and channel 5 is still binary 999 or 2000 regardless of which 6P button I press.

I wish there was a way in AP to remap the flight mode to a different channel other than RC5. Is there a way? I am using multiple position switches on some of the other channels and they seem to be working fine, so I could test using a different channel to see if that eliminates the problem.

Is there any setting in AP that controls the behavior of the RC channels other than the RC5_XYZ settings? Here are my RC5 settings:

Is there a way?

Sure there is the FLTMODE_CH paramter. But I don’t see the point in doing that.

I changed the flight mode channel to channel 8 (FLTMODE_CH=8), and reconfigured the radio to transmit the data on channel 8, and the flight modes are working fine. The green bar in the Radio Setup screen also shows incremental gains as I press the 6P buttons.

So this problem only exists for channel 5, and I am becoming more and more convinced that it’s a (possibly recent?) bug in AP.

There is no bug. If there were in something so fundamental that so many are using the forum would be flooded.

Well, there is a problem somewhere :). And given that the exact mix (that doesn’t work on Channel 5) when copy-pasted verbatim to Channel 8 seems to work fine, that leaves only two possibilities:

No doubt #1 above is still theoretically possible, though this is a generic (Matek) ELRS RX wired to a UART and flashed with the latest firmware, so it’s not like it has a separate hardware PPM pathway for that channel; if the RX was defective, none of the channels would work.

I may try to downgrade the AP version a few notches and see if I get the same behavior for this exact hardware setup. I will post back if I find anything else.

Your mix could still be a mess. The output tab matters as well.

Downgrading AP sounds like introducing a variable rather than eliminating one.

It makes zero sense that a single channel would have a problem. Either the RC signal frame is received and parsed or it’s not. This ain’t your Daddy’s old RC hardware.

I would remove the chan 5 input entry and configure a curve for modes on chan 5 with the 6P buttons. Or chan 8, that makes no difference. I must have >10 models setup this way also on a Radiomaster with EdgeTX.

That’s what I did in the end. I used a curve to make sure the right PWM values ended up at the outputs for the 6P buttons. It works great on channel 8, and simply doesn’t work on channel 5 with the exact same data copy-pasted between the channels. On ch5 I only get either 999 or 2000. It;s weird, but since it’s working now on channel 8, I am all set. I simply won’t use channel 5…

Anyone care to share their open tx profiles for this TX for different vehicles, simulators etc… I know someone who would be grateful (-> this guy <-).

I utterly hate setting up radios…

And really the wiki should just have common setups to download for this and other common radios. (There probably is a spot but … )

So this problem only exists for channel 5

Test that channel with a X8R or similar receiver, attaching a servo on its output 5. Assign a three position switch and try to get three different servo positions, working on transmitter parameters. MP not involved.

Anyone care to share their open tx profiles for this TX for different vehicles, simulators etc… I know someone who would be grateful (-> this guy <-).

I’ve switched my radios to EdgeTX so all the models are stored differently. But if you’re thinking about switching from Open to Edge then I’ll share some of my models. Some are little messy because they are more of an evolution of design, rather than purpose built. If there’s anything specific you’re looking for just say so.

I’m probably barking up the wrong tree entirely, I read this a while ago when I looked at ELRS FAQ - ExpressLRS

Sorry to interject if this is rubbish.

Sorry to interject if this is rubbish.

Not rubbish, an astute observation and a potential cause of the issue. I use CRSF but not the ELRS variety and it’s been a topic on the forum.

Thanks for the offer!

Honestly, I don’t know the differences between EdgeTX and OpenTX. A quick google led to things like touch screen support, different GUI, and higher polling of gimbals.

I have no preference either way. Just need my radio to work for development mostly real flight and xplane and flying when I can.

Right now I’m just trying to get this 6P switch setup in real flight. And it seems as usual realflight doesn’t place nice…

In the end what I’d like to see on the wiki are entries for common radios, vehicles, and sim environments. So I can just load and go to get 80% of they way there for a new user.

EDIT: Real Flight Settings TX16S on CH8
Follow the youtube video above but change the curve settings to the following to get in the center of each mode except the end points.

It looks like ELRS always defaults channel 5 to a 2 position switch for arming to save bandwidth.

If someone can help me set it up in the Wiki, I don’t mind making some EdgeTX “basic” profiles for Copter and Plane. I’ll even write up a bit of an explanation. It looks to me like everything is migrating to Edge from Open so I’ll focus on that for now.

TL,DR. Just in case someone needs a summary: