Does 16channel ppm work on copter? I’ve got my taranis and minirx openlrsng receiver set up to 16 channels but in Missionplanner messages its saying ppm 12 channel (forget the exact wording). I don’t see an option anywhere to adjust this to 16 channels in arducopter, did I miss it or does it auto config? Searching I see a thread from back in 2017 saying it didn’t work Feature request: Full 16ch support for PPM input

I’ve always used 12 channels but would like to start using 16 as I have a need for them now. Would I have to configure my rc instead as 12 channels and 4 switches, where the switches are not on ppm but run additional wires from the RC receiver to the pixhawk?

If it doesn’t, I guess that’s my rant… it should!

Where are you seeing this message, what is it exactly? 16 Channel should work fine.

I had 16 PPM channels working on Rover with a ULRS module a few years ago. I don’t imagine Copter would be any different in this regard.

Must be I don’t have it configured properly somewhere. I have the transmitter/receiver set up for 16 channels, but not 100% sure on the Frsky Taranis. I have it set to
external rf
mode ppm
channel range 1 - 16
ppm frame 32.5ms 300u +

Does that look right? Here’s the Missionplanner message where its says 12 channel. does that actually mean out to the ESCs? 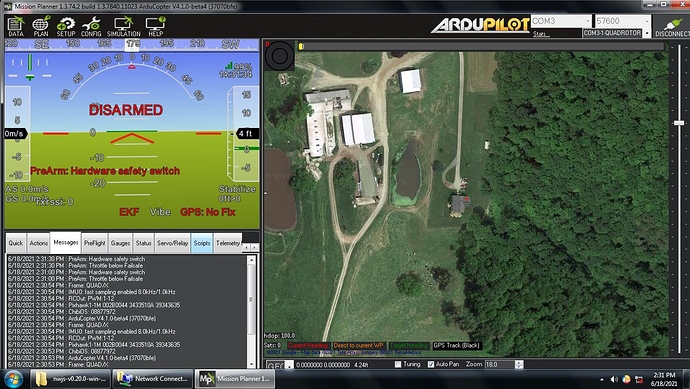 I think I misread that to be ppm (actually says pwm).

does that actually mean out to the ESCs?

Yea, 12 outputs nothing to do with inputs. There are messages for the Input Protocol (Sbus, Fport, etc) but not sure about PPM or any indication of channel count.

Does that look right?

I don’t have that system anymore but I do recall monkeying around with those settings to get it to work.

Something is definitely off, when I go to the radio calibration screen, it used to work when everything was set to 12ch, but now migrating to 16ch one of the bars is maxed green and nothing responds.

You might have to re-bind the receiver after messing with the Taranis settings.

Bind looks ok, I’m thinking the frame 32.5ms or the 300u is incorrect on my Taranis. I can change both those numbers, and when I change the range to 1-12 it doesn’t modify those numbers so I’m a little suspect of those two settings. Any idea what they should be?

edit trying it again this morning I see that its probably me that caused the issue. In Taranis, if I go into the frame time field and hit the enter button (to make a change to it manually), it no longer goes up and down with the # of channels. If I turn the Taranis off then back on again, the frame time changes with the # of channels once again. When I select 1-16 channels it sets the frame time at 38.5ms. I haven’t tried everythng yet but I suspect it will now work. Thanks Pete and Dave for the help

16 channels is now working with that 38.5ms and 300u setting. I did experiment a little and maybe it was just my perception but seems like the RC was more responsive in the Missionplanner RC calibration screen when I adjusted the Taranis to 38.0ms. I tried from 35ms up to 39 and at those edges it was sluggish and started introducing errors. But I am curious if those 38.5 and 300u settings are optimal? I also tried 150u to 400u and thought maybe 250u was as good as 300u. I will go with the the Taranis defaults for now but I might try 38.0ms frame time and see if there’s a difference unless someone thinks that might not be a good idea