I have a new Pixhack V3 and I’m trying to decide which heli to put it on. I have a logo 480 a logo 550 and a M.A. whiplash 700 gasser.
In my youth I would check the depth of the waters by just jumping in, I’m a little older now and want to check with one foot or even toe. I’m simply saying that I would like to put the Pixhack on the 700 gasser but for the first time due to crash costs I’m leaning towards the 480. But even with lower head speeds and the largest possible battery I realize flight times are limited compared to a gasser.
I have no real purpose or mission for uav copter other than to try one and have a new toy. I have several goggles from the fatshark hdo’s down. Do well balanced heli’s provide a stable image? Mission planner or something else?
These and probably many other questions that need to be answered before I pull a Neo out of one of these helicopters.

The 480’s are are cramped for space for all the electronics. The 550 is ok. The gasser is where it’s at. A big gasser makes a really fun FPV machine.

Yes, well balanced helicopters are as good of a camera platform as anything there is.

I would recommend QGroundControl for setup. It has a heli setup page that actually works. Mission Planner’s heli setup is broken. There’s a series of videos in the wiki that will help you understand setup. Properly set up, it won’t crash unless you crash it

One of Ferruccio’s gasser FPV vids - he’s got a DVR on his system. Flown with ArduPilot.

Thats a nice video, it looked like he was using the Headplay goggles. Question for you Chris, do you do hands on assistance to help people get their helicopters set up? Do you give seminars at flyin events? I’ve been a lurker on this forum for quite awhile now and it seems that for many people on here you are the goto guy for technical answers.

Also can some of the features like the one that you developed (I can’t remember what you called it but it makes the heli fly more like its on a conventional controller, Neo Axon etc) be used with Q ground control?
Thanks,
Mark

Question for you Chris, do you do hands on assistance to help people get their helicopters set up? Do you give seminars at flyin events?

Yes, I’ve done quite a few commercial helicopters for people. I have not done any seminars at fly-in events, however.

Also can some of the features like the one that you developed (I can’t remember what you called it but it makes the heli fly more like its on a conventional controller, Neo Axon etc) be used with Q ground control? 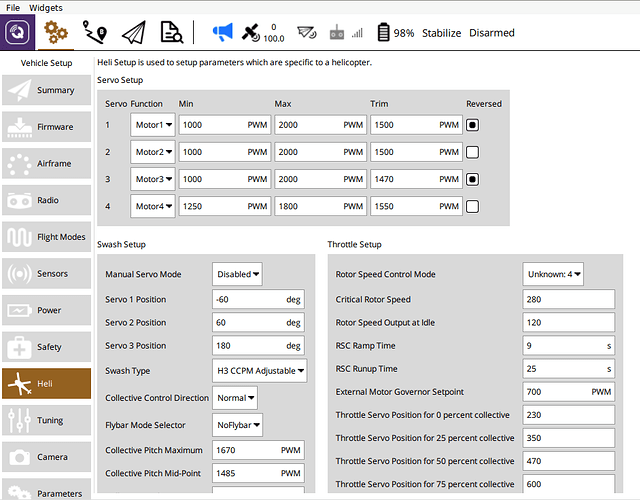 I fly modified code with features in it that has been developed for helicopters, some of those features of which are in PR status to get into Copter master, some of which aren’t. The feature you refer to is the modified virtual flybar acro mode, which is currently not available in Copter. That is only available here (along with several other features that aren’t in Copter) at the present time, to be flown on the 3.6 stable firmware. Your CUAV v3 controller requires the fmuv3 firmware. If you want features like built-in governor, the improved acro, etc… use that firmware and load it with QGroundControl by using the advanced option on the firmware page and “Load Custom Firmware”. If you want just the stock Copter stable release, then QGroundControl will fetch it for you and load it in your controller.

Sound good, thanks for the advice.

So would this be the file to download for my pixhack v3? ArduHeli-3.6-Stable-fmuv3.bin

Yes, that is the proper one for the CUAV v3. It has built-in governor, the modified virtual flybar acro, etc., which is not in Copter (yet).