Wingsail Setup with Pixhawk4 and RPi

Wow…super impressed to see the progress on the sailing code front!

I’ve been wanting to try a wingsail setup. I’ve tested it manually enough to realize I really want to aim that sail better, and I decided to try a stepper motor to turn the mast.

I built this setup with a RPi and L298n to run the stepper motor.

After reading through the other threads, I ordered that awesome looking windspeed sensor and the 360 pot.

I’ll get the code loaded up and start messing around, but it’s nice to know that I just need the RPi for the stepper motor and additional sensors.

I’ll have to start thinking through the sail aiming based on wind direction. I’ve read where others have created a fairly simple lookup table?

Interesting…it doesn’t seem that the FW version HERE likes the Pixhawk4 board.

It’s been a while, I’m probably just missing something obvious. 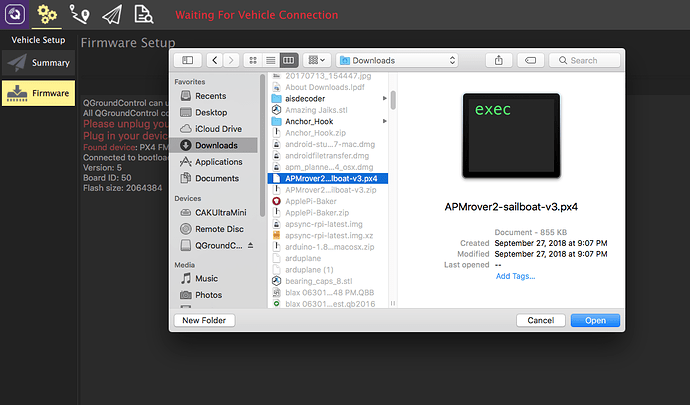 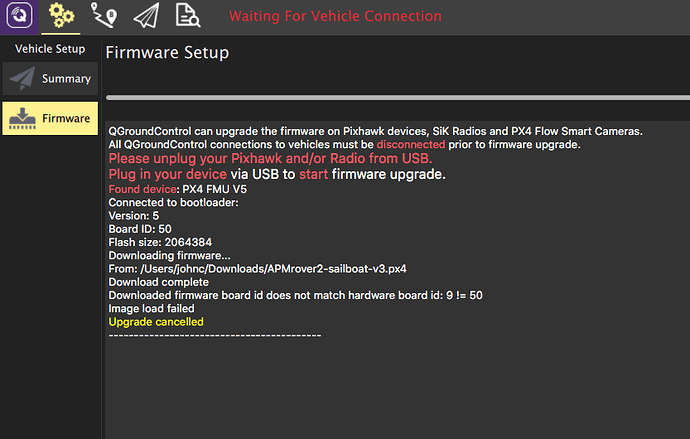 I didn’t check your Dropbox link, but I don’t think that PH4 (fmu-v5) support is in a stable rover release.
Try this: http://firmware.ardupilot.org/Rover/latest/Pixhawk4/

Great to see some more interest in sailing!

You will have to be on master to get the latest sailing stuff in any cace.

We don’t yet support direct movement of the mast, but it’s defiantly something we can look at adding. It would be more tricky than a main sheet system as it is much harder to de-power. Ie we cant just sheet out to stop, we will have to actively drive the wing to zero angle of attack, also it introduces the possibility of going backwards, weather on purpose or by mistake.

Have you considered a ‘elevator’ style control like on sail-drone? This allows the sail to trim itself to a given angle of attack. Again this is not yet supported in the code but I hope to add it. I think this style will also allow using the full wing as the wind vane and as its always pointed into the wind traditional airspeed sensors can be used. There is a disadvantage in downwind performance however as it can only ever be used as a lift based sail.

normally we support the L298n controller ! I just didn’t had time to make the documentation. Nor finish the PWM_TYPE per output check…
But you should be able to get ride of the RPI soon !

Totally agree…I am using a moveable surface on the wing. Originally, I thought this may be enough to maintain angle of attack, but it doesn’t seem to be.

I put in on a land-sailing setup, and I could go downwind, and jibe, but I couldn’t produce lift into the wind for long.

That’s why I started trying the direct drive mast. I was thinking the combination of that with the flap would give me enough flexibility to make it upwind.

Here’s some older pictures of when I put it together and first tested it. I’ll find the video when I had it on the cart and add it as well.

Definitely agree on the on the downwind disadvantage here! Looking forward to working through this.

Awesome! Would love to make this lighter and more simplified.

What is there to be done on L298N native support? Is there somewhere I can check in to see when it is supported?

To use the L298N you need to set the MOT_PWM_TYPE to 3 (aka PWM_TYPE_BRUSHED_WITH_RELAY) and use relay 1 and 2 to control the direction. But the L298N is pretty crappy so you need 4 relay. The solution I did was the put a transitor to control L298N input by two, that way I need only 2 relay on the pixhaw but lost fee-wheel and motor-brake functions… That is why a good motor controler is important ^^

I’m giving some thought to building about a 2 meter sailboat with a elevator type hardsail. Not sure how the wing could be used as a vane unless the elevator was put to a neutral position from time to time. I would think that having some stoppers on the rotating mast to keep it from turning much more than perpendicular to the beam of the boat would work. Down wind the hard sail would just be creating windage and keep the boat moving well. It seems like a very efficient way to sail keeping power consumption and wear and tear on servos and winches to a minimum.

Stoppers is a good idea, they would mean it couldn’t be used as a vane but you would get back downwind performance. I’m not sure how easily it would gybe you might have to turn a long way to get it to come across or it might be fine, I guess it just depends where the pivot point is.

Definitely something I want to add support for I think they have lots of advantages. As you say no winch required. I think also a big wing will work better in strong winds than a big sail would as you cant ‘back’ a wing like a sail. Elevator will automatically trim to wind shifts much faster than a winch could.

I agree with what you say. Pivot point of the hard wing I would think should be in the same area as the center of gravity as if used on an aircraft. That way the wing is balanced more or less going to wind and would not need much elevator. But then again you have the boat heeling and pitching more than you would have in an aircraft so I’m sure that would make a difference. I’m thinking of scaling up an old US1M design by 200 percent. It would give me a 2 meter hull, almost 1/2 meter beam and all up weight of around 40 pounds or more. I’m trying to figure out if I take a meter meter boat and scale it up by 200% will it sit on its lines at 2,4, 8 times the weight. Twice as long and twice as wide I would think 4 times the weight of the original design would be the in the ball park. The amount of ballast and depth of the keel would set the boat on its lines properly.

One more thing. I think the balance point of a symmetrical foil is in the neighborhood of the point of maximum camber on the wing. Is this correct??

I think the usual rule of thumb is the 1/4 chord. As you say if you set it up that the pivot is where the cg would be for a plane it should be OK. This boat sounds like a monster, i’m excited to see it!

It’ll will take me three months if I decide to do it. It will fit in my SUV. It will be durable. And most important it will not be a RC class of boat that is being asked to do things in rough conditions. RC boats are great for testing and general behavior but they will struggle when put in even a 2 foot sea. A hard sail is the way to go.

My elevator driven setup just would not head up wind. I wonder how much the hydrodynamic forces of a keel affect that ability to point upwind? I’m sure quite a bit.

Hmmmm…maybe I don’t need to drive the mast.

I think a wheeled vehicle would be better upwind than a boat. Boats have inherent side slip. You might need a longer arm for you elevator. I think the proportions should be about the same as plane.

I was thinking about building a land yacht to do some testing at higher speeds. From what I can find they really need tarmac to work well. I have access to some big beaches but the sand might be a bit too soft.

I am building a 1.5m sailboat with a wingsail similar to the one used by saildrones.
Having a small tail set apart from the main wing reduces air turbulence and allows easier control even with a small servo.

Moving windvanes turned out to be too fragile for rough sea conditions so I’m trying to create an ultrasonic wind sensor from cheap parking sensors. The wingsail and tail in neutral mode can act as a backup/redundant windvane in case of inconsistent measurements coming from the main sensor, it has already been tested by OpenTransat.

Software side I can test code for a rigid sail, even though usually wingsail control codes employ a lift coefficient matrix to choose the best sail-tail setup and code portability is then reduced.