Why, WHY the pitch attitude errors? v2.78b

I’ve been battling with this frustrating problem for months now with different airframes and firmwares. Many thanks to Paul Riseborough who has been assisting and who has added certain patches in an attempt to fix this but we’ve not yet been able to get to bottom of the problem so I’m posting here hopefully so we can get further insight into this.

Basically, in Loiter, the APM 2.5’s with external compass and GPS on these aircraft (a Super Skysurfer in the case of this tlog) incorrectly senses the pitch attitude at a latter point of the Loiter. The plane dives loosing altitude and speeds up while it is actually sensing that it is pitching up. We’ve not had a crash yet but it’s a very real possibility.

This picture from the tlog below shows an instance of this anomaly. 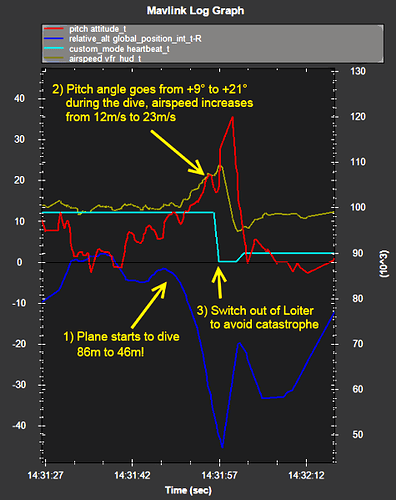 So WHY does the APM think the plane is pitching UP when it is visually pitching DOWN and is evidenced by the loss in altitude and increase in airspeed? It doesn’t happen on every flight or every loiter and seems exacerbated by a bit of wind blowing.

Motor is a high quality T-Motor and the prop is a balanced APC-E 12x6. Vibrations are almost absent.

Any help will be greatly appreciated!

Is the SSS flexing at all? They are bad for that leading to flutter. Be very careful at high speed with it.

On the log pic above you can see as soon as I switch back to manual at 23+m/s the plane rears up to an indicated 30°+ indicating that the elevator servo and elevator surface is working fine, this is what we observed visually although the observed pitch up was from -10° to +35°.
APM was holding the nose down because it is sensing that it is flying at +20° whereas it was actually diving at perhaps -10° so there is some serious problem with the AHRS attitude estimation.

And to answer your question: no, I don’t think it’s flexing, I read the reports of elevator blowback problems and have made sure the elevator pushrod has enough support including the glassfiber tube that the plane comes with, plus an extra support epoxying that tube to the lower surface of the horizontal stab. The pushrod guide is also epoxied into the fuselage. I can push quite hard on the elevator and there is very minimal movement.

I feel that we are drifting with this firmware

I feel that we are drifting with this firmware

I feel you may be right. I have also noticed a distinct lack of support from the devs. Is something going on here?

I’m not sure I would call it a lack of support but the changes or improvements have certainly slowed down and the questions have gone unanswered for weeks. Wait, that does sound like a lack of support. But be careful, I think these guys work for free.

understood Steve, but if people are investing $500+, and putting in the air, it’s good to know that there’s continual development on the platform; and if it’s community driven, that it’s actually community supported.

I have a similar issue and have been watching this thread, but it’s unfortunate no devs have chimed in.

I’m preparing a major new release at the moment. One of the big things is the dual sensor support and EKF support on Pixhawk that should help a lot with pitch errors.
Unfortunately we don’t know why Graham gets pitch errors on his APM2. I know Paul has been trying to diagnose it with Graham, but as far as I know it isn’t solved.
Cheers, Tridge

I don’t know if this crash (viewtopic.php?t=6948) was related to the pitch errors reported here.
Tridge, may I direct your attention to this post when you have some time.
Jonathan deferred to you on this one.

Apparently compass errors may have been the cause but we may never know.