Where can I get good motors?

Skyrocket does not have motors. Amazon has no idea when or if it will have Spintec motors. There are other sources on the web but the review on them are not very good. The actual specs on the Skyviper 2450GPS are very vague. Does anyone have a good motor experience?

There was a comment on this page about the motors and where you could get more. Because you certainly can’t get them from SkyRocket. Looks like they are pretty standard and could easily be replaced out with other 8mm brushed motors.

Hardware support seems to be an real issue . I too have a dead motor after a dozen short flights , a motor has failed . Submitted ticket to customer support asking about a replacement motor , a week later receiv reply which says they offer no warranty , but provided a link to thier online store . Except no parts at all are listed for Skyviper 2450 gps they do list parts for other 2450 models ,but have not had motors in Stock for what appears to be awhile.
The motors in my 2450gps appear to be 8mmx20mm with a 13 tooth pinion . I have searched all over and only other motors that I find are either 7mm or 8.5mm and ones with pinions are either 9 tooth or 11 . So I am not sure if they would work or which ones to order . Any one have suggestions for motor replacements . Otherwise only option left is return to Costco for refund as they have no stock to exchange with. Very disappointing.

Hi All,
I’m new here and to quads. This place has been a lot of help so I thought I’d put in just a little.
Just replaced one of my motors with a 8.5x20 mm motor that I ordered online. My bad motor measured 8.41mm dia and 20mm lgth. It works great but I had to cut the old wires off of bad motor and solder them to the new motor because the new connector (mini jst) didn’t match factory connector. The new motors came with 13 tooth gear just had to slide it up the shaft a bit to get it to match prop gear.
I just finished running down 7 batteries without any problems. Just my experience. I would measure your motor before ordering a new one. Hope this helps.

Phillip glad to hear 8.5x20mm worked for you . I did not have a caliper to measure just a cheap plastic ruler , so I bet mine are closer to 8.5 like yours . I was also able to remove pinion from my bad motor so for now pinion size should not be an issue . Were you able to just replace the bad motor or replace all 4 in kind? .

I concur. Motors are 8.5x20 mm available from many sources for cheap. I just got 4 from HobbyKing for under $10 without gear or connector. I spliced the connector from the dad motor and swapped the gear as well. Not much work but it sure would be nice if skyrocket part were available. I see the possibility of a worn or broken gear putting an end to this thing.

Can you post a link to your source that includes a 13 tooth gear. All I found were either 11 tooth or none.

Joe
I just replaced one expecting to do all four due to differences in manufacturing but it flew so well im just leaving as is until another motor dies.

Jerry
I bought them from amazon. They are Uxcell 4 pcs 8520 3.7v motors with 13 gear. They are a really close match except the wires are a lot shorter then the originals but you have to solder the connector on anyways. Hope this works try link below. 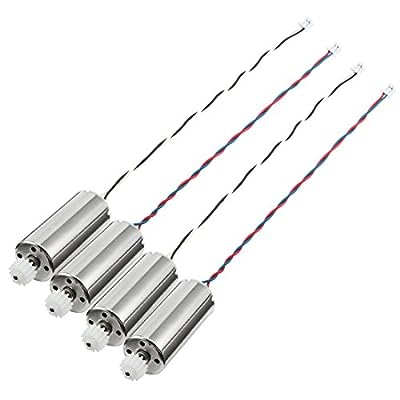 wait. i thought it the teardown pictures it showed the motors being attached by plugs. are those plugs no available anywhere?

These look to be what the motor leads have for plugs .
JST SH 2 pin

Micro Motor Warehouse has some of the best motors around. This one might be a good fit https://micro-motor-warehouse.com/collections/all-motors/products/cl-0820-15-11t
The pinions are only press fitted on so could probably be removed from the old motor and applied to the new motor.
Also you could ask MMW if they have a motor they recommend for the 2450gps.
I have used many of their motors in my Syma X5C days.
Brushed motors are only rated for 5-6 hours run time so best to get a spare set ready.

I replaced left front motor with the Hobby King motor after swapping the gear from the old motor and splicing the connector.
It seemed to start up fine so I took it out for a flight. It was a little unstable and I thought it might be due to a slight power difference with the old motor so I ran an auto-tune and it improved greatly. On my first flight the next day, I had trouble getting any response at all. I could connect to the sonix but beyond that, no blinking lights from the drone. After doing a factory reset, the drone lights returned so I did a calibration and it seemed to work. All motors spin and the motor,magnetometer calibration seemed normal but now the drone will lift only a few inches from the ground, probably limited to ground effect altitude.
I have tried using the more extended calibration routines within Mission planner which include calibrating the transmitter stick range. Nothing seems to help. I suspect that it has something to do with the new motor but I’m not sure. I guess I’m at the limits of my limited knowledge. What do you think.

I’m going to copy this to a new topic since it may not be related to the motor replacement.

Hello Jerry, I think you can use the web interface’s ‘System status’ > ‘Motors’ > ‘Motor Testing’ with a power level of 100 on all motors to check if the quad has enough power to lift up. Be careful doing this test for obvious reasons. This test would rule out any calibration problems that would cause the quad to not want to lift up.

If the quad still does not lift up it may be because they are designed to operate at a higher voltage than the Sky Viper original motors were. For that there might not really be an easy way to cope with that.

The replacement motors that I ordered on Amazon Canada arrived , the key difference from the stock motor that I am replacing is the stock motor is not ventalated on the top & the new motor appears to have a brass bushing, barrel or bearing not sure what it is…where the shaft enters the top of the motor & the shaft is approximately 1 or 1.5mm in lenght shorter by estimation. There is no pinion on the new motors but I removed the one off the dead motor & it appears to fit with no clearance issues on the shorter shaft but I haven’t mounted the motor yet.
This is the confusing part, the new wire colors are black & white, & the old motors are red & white for the motor that I am replacing, which I think is the clockwise motor, by looking at the shape of the prop, its marked A & it’s on the front port side. The new motors have slightly different colored end caps, one being beige/grey, the other one white. The white end cap has white & black wires, the beige/grey has red & blue
wires.
The motor I need to replace has a beige/grey end cap but red & white wires. Please advise what I should do?
This is what I ordered …
BTG 1S 3.7V 8520 8.5x20mm Mini Coreless Motor Set for Tiny QX90 QX95 LT105 Kingkong Q100 JJPRO T1 T2 90mm-130mm DIY Micro Nano FPV Racing Quadcopter Racer Drone Miniquad Frame
Update :::
Well the first try with hooking white to white red to black resulted in motor spinning cow instead of cw . Time to disassemble and melt those 2 decent joints I manged to finally get to form. The super small wires are so small it’s next to impossible for me to do any thing with them due to badl hand tremor . Thank God for wife’s help . Reversed wires and it’s airborne inside all appears good after I quick calibrated and did a fixed manometer calibration . Weathers turned back to cold and to breezy to try out doors yet . Maybe tomorrow. I have photos I’ll try and post in case they help some other person .

I guess a question I have is what KV the stock motors are? I don’t see what it is on the original or the replacements listed. I put a SV S1700 FC in a 65mm TW frame with 17,000kv motors and it’s crazy fast.

As an update on my motor problems, the motors from Hobbyking look like exact match with end cap colors and wire colors being the same as the original. There are no other markings on them so It is impossible to be sure. I needed to replace the left front motor (red and blue wires) and the first one worked for only a few flights before failing to a half bad state such that it would spin but had less than half of the required power. I replaced it with the second motor from the set and it seems fine after several flights. It was the suggestion from RUSTBOX to use a 100 setting on the motor test which revealed the lack of power.

Can you post a link to them? Also, did they come with the pinions?

Man! I had no idea Jeff Gordan was into SkyViper drones!

I have replaced motors of one of my SVs. One of motors requires very high throttle. Below 149th log maps RCOUT 1-4 and blue one shows it is maxing out. It resulted inability to flight against wind or unexpected early landing etc.

Got CL-0820-15 motors from Micro Motor Warehouse and replaced all. It is very well documented. I got a cheaper one from HobbyKing but gave up as I could not identify which is CW and CCW. MMW has a few kvs. Not sure which, picked up middle to low one.

Replacement was straight forward, can finish in one hour. My MMW motor came with shorter wires and 11T pinion. I simply cut and soldered to existing SV motor wire, replaced pinion with SVs 13T one.(push on)
Marked motors rotation direction CW and CCW according to MMW photo. Also marked SVs motor as well. (Front Right motor is CW, for example)
MMW motor polarity is also documented well. SVs motor wires are Red-Blue and Red-White. Red is plus and rest are minus.

If you are not sure, SV Web I/F, System -> Motor testing function was handy to test each motor. 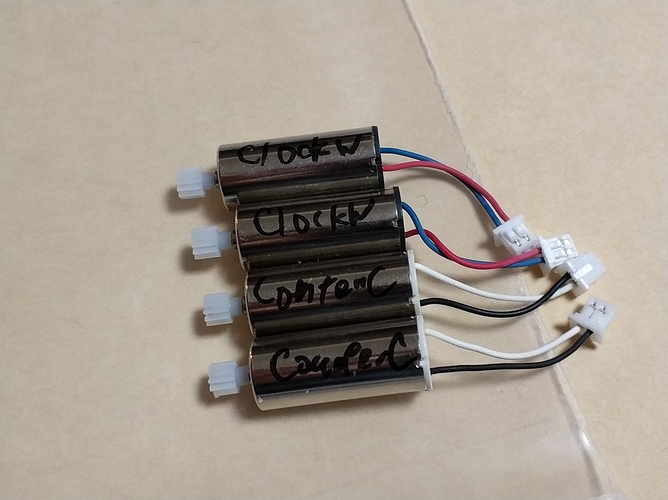 Disassemble SV, unscrew 8 + 2 + 2 screws to remove bottom battery holder, bottom white part. It may not be necessary to remove flight board. 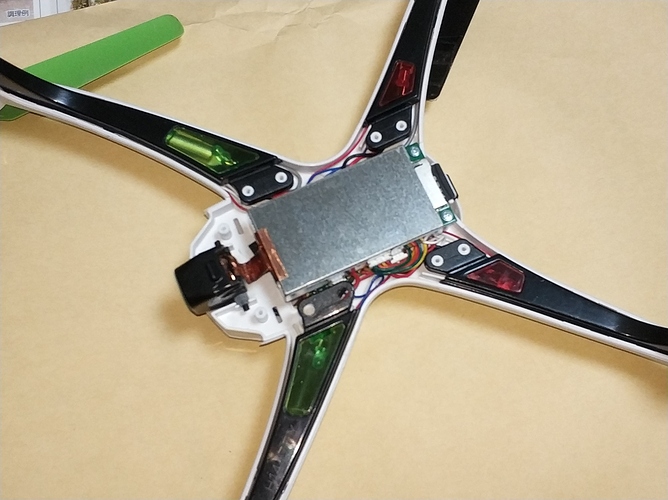 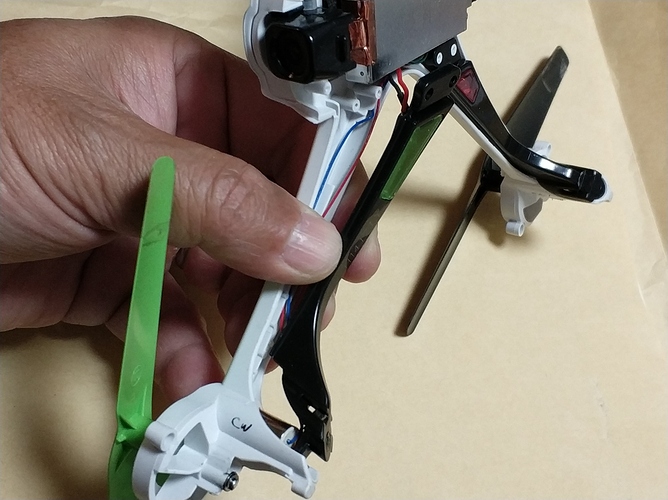 Now motor can be removed by pushing from pinion gear side. 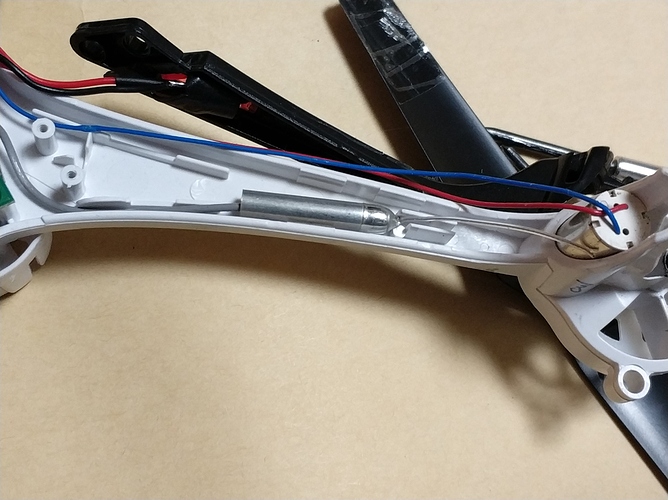 Probably I should break-in these brushed motors, but I skipped…This is indoor flight log after replacement. it shows SV can hover well with no excessive throttle till 3.3V.