What is the status on Intel Aero and ArduPilot?

Would it be possible to get a clear status on support in Intel Aero ?
It seem that is is downgraded from full to partial support and, to add to the confusion, it seems that Intel does not have a clue either… You can look at this:
https://communities.intel.com/thread/107722

My question is basically aimed at deciding on a next companion computer project. I am interested to get a low power, small form factor onboard’’ Quad Core Intel based processor, running a full blown 64 bits Ubuntu Linux in the 150- 200 $ price range.

If in fact the Aero Board (Basically an ‘‘Intel Supported’’ UP Board), is not running the flight stack autopilot within a shell, then it would be preferable to get a generic Atom based ‘‘TV BOX’’ computer that offer the same processing power at half the price of the Aero Platform

That thread doesn’t talk about ArduPilot at all. Company representatives in forums not knowing things is nothing new unfortunately.

I believe the Intel Aero is fully supported by ArduPilot (it has been merged and support for it is in the newly released Copter 3.4), but let’s get @lucasdemarchi to confirm that.

Lol , It really show the level of expertise that we can benefit here

So basically, without going into the Intel-Dronecode story, may I ask if Intel based linux based computer -like the UP Board - is in the list of fully supported platform ?

The Aero board is listed at $399 plus another $149 for the realsense board which is pretty expensive. Is there a cheaper way to get it? It does look interesting with CSI, USB3 and MIMO wifi.

Take a look at the Up Board , repackaged by Intel as the Aero : http://up-shop.org/

Necessary disclaimer: as you might know I’m an Intel employee. And I’m also the Linux maintainer in ArduPilot.

I asked Randy to change the release notes of copter 3.4 so Intel Aero board is listed as “Intel Aero Compute Board” and as not fully supported. The reason is that you won’t be able to buy and fly with it out of the box. It’s being sold as a companion computer not as a flight controller.

So basically, without going into the Intel-Dronecode story, may I ask if Intel based linux based computer -like the UP Board - is in the list of fully supported platform ?

I can’t talk about any future products, sorry.

Take a look at the Up Board , repackaged by Intel as the Aero : http://up-shop.org/

Aero is one board

UP board is another one with the same form factor as a RPI. Together with a realsense camera and some accessories it’s know as Intel Robotics Kit: https://software.intel.com/en-us/realsense/robotic-development-kit

Does Partially support applies exclusively on a companion computer architecture?

No. I’d say BBB / RPI are partially supported as they don’t have all sensors. Even in a board with all sensors needed, if the connections aren’t exposed in a way people can use, it’s not off the shelf support.

Then if I build a cape for the Up Board that exposes all the sensors , like on the BBBMI , (including setting the libraries and defining CONFIG_HAL_BOARD_SUBTYPE and building&patching the kernel and associated dtb so we can access with standard HAL method) then It would be considered as supported ?

Would you need a champion for that , like Mirko for the BBBMini or the team is assuming this role directly once developed ?

@ppoirier the distro that comes with UP has all the patches to kernel already. Sad thing is that it’s almost compatible with navio (but doesn’t have a way to implement RC input in the same manner) and almost compatible with navio2 (but it doesn’t have a way to use the 2 spi buses, unless that was solved in their latest kernel).

@lucasdemarchi
Well that sounds like an interesting information,I will wait a little and see for any new development on this subject.
Meanwhile I will continue to explore the Intel companion computer options to get the best bang for the buck, So far an Atom based (Baytrail or Cherrytrail) TV BOX (100-150$) that runs on a 64 bit OS offers a tenfold speed gain over a RPI3 just at twice the price. And when you connect it to a BBBMINI (65$) over UDP , you get quite a powerfull onboard system for only 200$.

Thanks Lucas for your valuable time and informative answers

Never heard of it, that’s awesome! Potentially even better than an XU4 and a much better price when you factor in emmc. Are there any CSI cameras supported? Hope we can access the MFC for FPV encoding, great it’s got usb3. Shame it doesn’t have wifi. The aero board is really interesting but it’s way too expensive, particularly compared to the TX1 and once you start adding all the extras. 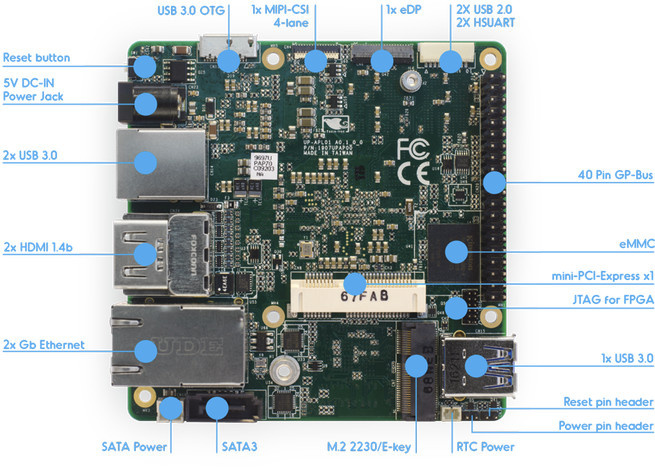 Just want to let you know what CA , wrote on this suject (here)

Partick: the terms stack means the complete components of a platform such as nothing else is needed to run applications on top of it (definition). A flight controller is part of a stack, but you need a lot more to be a full-stack.

So to add to the confusion, the definition of the Dronecode Stack is now including the software AND the Flight Controler AND the Companion Computer ?!?

Thanks for having answered at diydrones, and clarifying the misleading information concerning a new type of “dronecode stack”.

now that the aero rtf is out and its listed among the documentation of ardupilot, I wonder how practical it is? There hasn’t been much reports about it, but it does look like great tool with realsense to achieve autonomous indoor flight for me. It claims to support Linux, ROS, and ardupilot.
http://ardupilot.org/copter/docs/common-intel-aero-rtf.html