What is the channel meaning on receiver and transmitter?

This may not be the most technically correct explanation, but hopefully it will help get the idea across.

A channel is the signal path for each type of message your radio sends to the flight controller. It’s a little bit of a carry over from the old days of model RC, but the concept still works. Usually the first four channels are used for roll (aileron), pitch (elevator), thrust (throttle), yaw (rudder). The channels after that are a less standardized, but usually you will have one for arm/disarm and another for modes.

Think of each channel is a dedicated command signal from the radio. On old RC receivers each channel had it’s own wire from it to the servo or ESC. Now we use serial communications like S-Bus or CRSF and it’s all on one wire, but the signal paths are still treated as individuals.

The number of channels you have now has more to do with the protocol you’re using than the radio itself. Some protocols will only give you 8 channels but the trade off is the latency is crazy low. If you use 12 or 16, you may have higher latency. But unless you’re an elite FPV racer you probably won’t notice the difference.

This all get’s more confusing when you’re using a TX16S. They are great radios but OpenTX can be daunting if you’re new to this. This guy has some great videos to help you get started and work through it.

3- I saw at the my related recevier features. there was 8/16CH. what is the meaning of that ?

To answer that question use this Frsky X8R as an example. Over S-bus all 16 channels are present on a Serial Bus. On this Receiver 8 individual PWM channels are also available. Whether they are 1-8 or 9-16 is user selectable. These are not additional channels but the same channels as provided on the Sbus port. 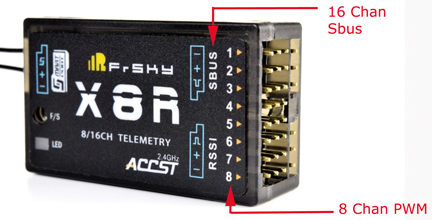 it was so good, thanks for all answer. I am already use frsky R9