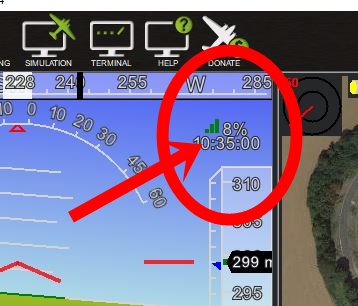 In case of telemetry via usb or good wifi connection 100% are indicated. Therefore, shouldn’t it be “good packages” ?

But a bad G4 connection via VPN shows eg about 60% and due to VPN, not a single bad packet should be received !!!

What does the “wireless telemetry connection” actually indicate ? How is the value calculated ?

it is a % of dropped to received packets.

Thank you for your prompt reply. For telemetry and video i am using UDP. At VPN, I’m unaware. I use ZeroTier VPN https://www.zerotier.com/ .

Using wireless telemetry, I see the reading at 100% when the vehicle is very close and it drops as the vehicle gets further away and the telemetry starts having trouble communicating. So, isn’t the value maybe 100 minus the % of dropped to received packets?

I might have said it the wrong way. But yes, 100 means no loss. Anything lower indicates loss

Can you supply a tlog. I think it could be because of out of order udp packets

you mean a tlog from mp ?

Yes. The tlog should show me the out of order packets. Then I can confirm if that’s the issue

changed 1 files with 1 additions and 1 deletions.