I’ve been slowly tuning and working on a VTOL tilt rotor plane, updated everything to the latest firmware last week. One issue I’ve had consistently is a bad oscillation on descent trying to land. I upped the motor gain from default 0.5 to 0.75 and it seems to help, but I had a light bulb moment. When the plane is descending nose up, the elevons are responding in the wrong manner. In forward flight elevon down would nose down, but in the “backwards flight” of Tailsitter landing the elevon down motion causes the nose to go up. Has anyone else remedied this? I assume on a non tiltrotor Tailsitter this would be a much bigger issue.

I do not, never installed an SD card in my FC. I will work to get one. Conceptually though it makes perfect sense unless there is already some code implemented that reverses elevon outputs when descending.

Are your elevons “blown” by the propellers? That tends to keep the airflow in the right direction.
If so, you could try increasing the spin_min parameter to improve elevon authority during descents.
I don’t think anyone has tried to stabilize a flying wing in backwards flight yet

Attached my log file in the link below, I thought it was a short flight but the log is 20MB. There was a pretty good wind today, when descending it actually did a ton of weird stuff. The only way for me to keep control in qstabilize is with a lot of throttle unless I have forward motion. CG is spot on almost dead center on the same axis as the motors.

Oh, and yeah the motor pods are basically centered on the wing in front of the elevons. Should be plenty of airflow across them.

Do you have any video?

Just OSD video from my goggles

I wanted to see the airframe; some pictures would help.
Does it behave okay in qstabilize and qhover when not descending rapidly?

If I keep high throttle it will hover nicely while gaining altitude. It also does well if I keep it going forward about 15-20 degrees from nose vertical. The motors are several inches in front of the CG, and the pivot point is the center of the wing chord. 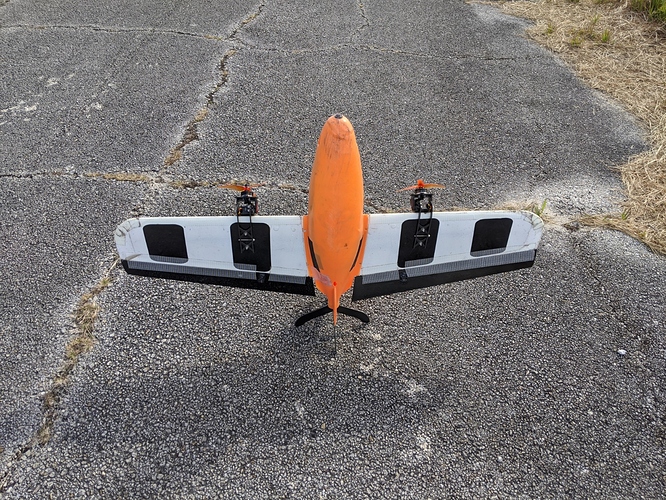 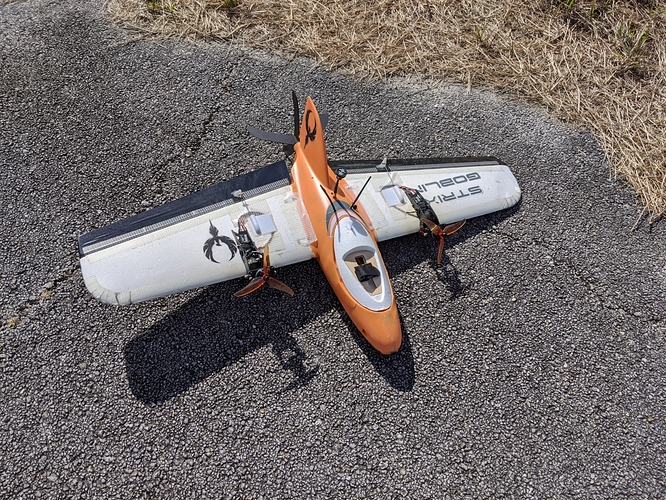 Vectored tailsitters should have plenty of pitch authority even at low and negative airspeeds. Maybe you just need to work on PID tuning for the pitch axis. Those are the Q_RAT_PIT* parameters.

There are also several other parameters described in the wiki which apply to tilt vectoring, such as Q_TAILSIT_VFGAIN and MIXING_GAIN.

After another hour or two of tweaking I got the hover much much better. I am not able to fix an issue on takeoff though, it tends to overshoot and fall over when I try to take off. My suspicion is I term windup, but I put q_a imax at 0 for roll/pitch/yaw. See video below, right after take off it has bad oscillations and then hovers nicely. Most of the time it ends up falling over as I try to take off. I will ramp throttle up very slowly yet one motor will throttle up very fast.

Oh, between my last flight and the flight above I upped q_a_pit to .35, roll was only at 0.1 and I moved it to 0.2, then I found a parameter called q_tailsit_thscmx which was at 5(max) and the descriptions says lowering it will reduce low throttle oscillations. I put that to 2.5

Try taking off in qstabilize by advancing the throttle rapidly to hover level (should be mid-stick if Q_M_THST_HOVER is set correctly). You don’t want to sit around at less than hover thrust while still in contact with the ground.

Also, with a TVBS, you can take off from a “belly-sit” attitude:

On this airframe it tends to scoot forward along the ground if I try to takeoff from the belly. Could probably improve that by making the motor pods a little further forward. I’ll try ramping up quicker on the throttle when I go to a real field instead of my back yard haha

This is what my takeoffs (can) look like in the back yard (non-vectored):

That looks awesome, hopefully another couple tuning sessions and mine will be nice and locked in