Hi all, I asked a very experienced pilot at the club to help me get the kinks worked out of my new build, a Volantex Ranger EX with Pixhawk and Ardupilot. I think the throws of the control surfaces were reasonable and the CG was good according to the manual. Battery weight was high with two 5000mah 4s packs. I thought the weight would make it stable, and wanted the autotune calibration done with real-world conditions.

took off in MANUAL mode with 50% flaps deployed and 100% up elevator. was not easy to gain altitude. Flaps set to 0% for the rest of the flight (you hear us talk about this during the flight) flew quite nicely but with not a lot of authority on bank angles. flipped to AUTOTUNE mid flight and really struggled to control it. went back to MANUAL, lost altitude and crashed in a field. not much damage luckily.

I’ve attached log files of the flight. Hopefully the community can offer advice on if the plane was setup correctly before the flight, and what I can improve before trying again? Thanks.

Honestly without looking at the logs I think you have a heavy Ranger that may need more aileron authority/deflection. It is likely underpowered or under propped for its weight. I am guessing it may have stalled on the last turn and you were too low to recover.

Are you using stock motor and prop? I have the same plane but I have a much upgraded ESC/Motor/Prop.

Looks physical to me. Check out your elevator action here: 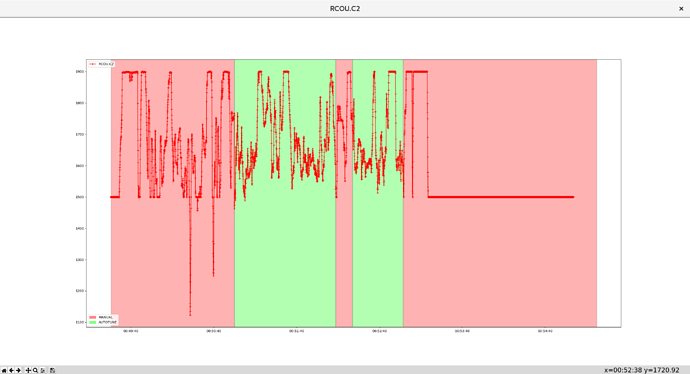 The PID winds up… a lot: 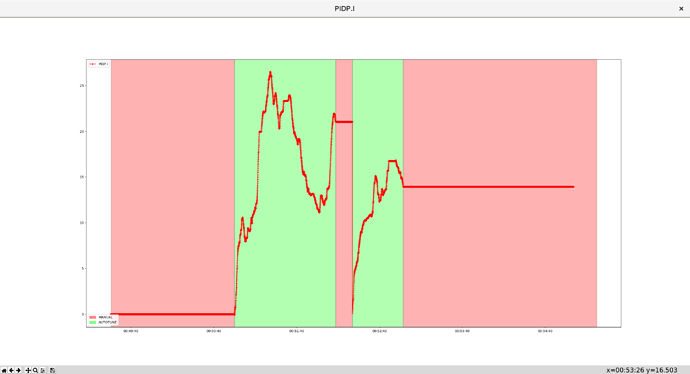 So I’d guess mass imbalance - do you double-check your CG before throwoff? Were the batteries secure? 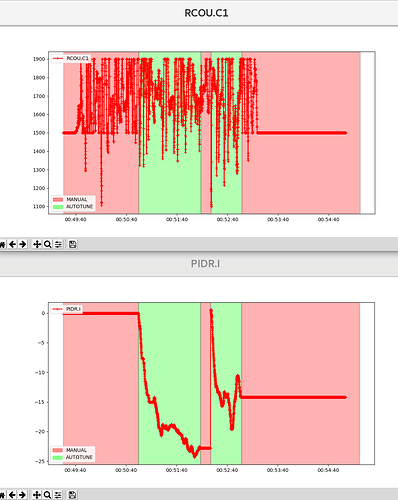 Glad you got your aircraft back mostly intact. Perhaps a less ambitious battery load-out for your second flight - and checking that CG in both X and Y!

An incorrect cog can result in higher stall speeds, especially when heavy. I would check that cog. The Ranger can carry that load ok but you need a correct cog. Or as has been said, maybe your batteries moved.

As Peter suggested you either have a mass imbalance or your flaps are not level with each other. I noticed in your parameters file only SERVO5 is set as flap output so I assume flaps are connected with the Y cable. If so, can you check to see if your flaps have offset between each other?

Checking out your servo output and gyro rate on the roll axis, when the servo output on the roll axis is at a neutral position the aircraft does not maintain its attitude. Instead, the aircraft starts to rotate to the right as the aileron goes to neutral in MANUAL flight mode. Also note that your gyro x rate becomes larger as your airspeed increase and vice versa at a neutral aileron position. This could indicate that it is a lift imbalance between right-left wings rather than a mass imbalance. Although not shown in the graph your rudder output is also at a neutral position during a neutral aileron output, so we can discard the effect of the rudder. 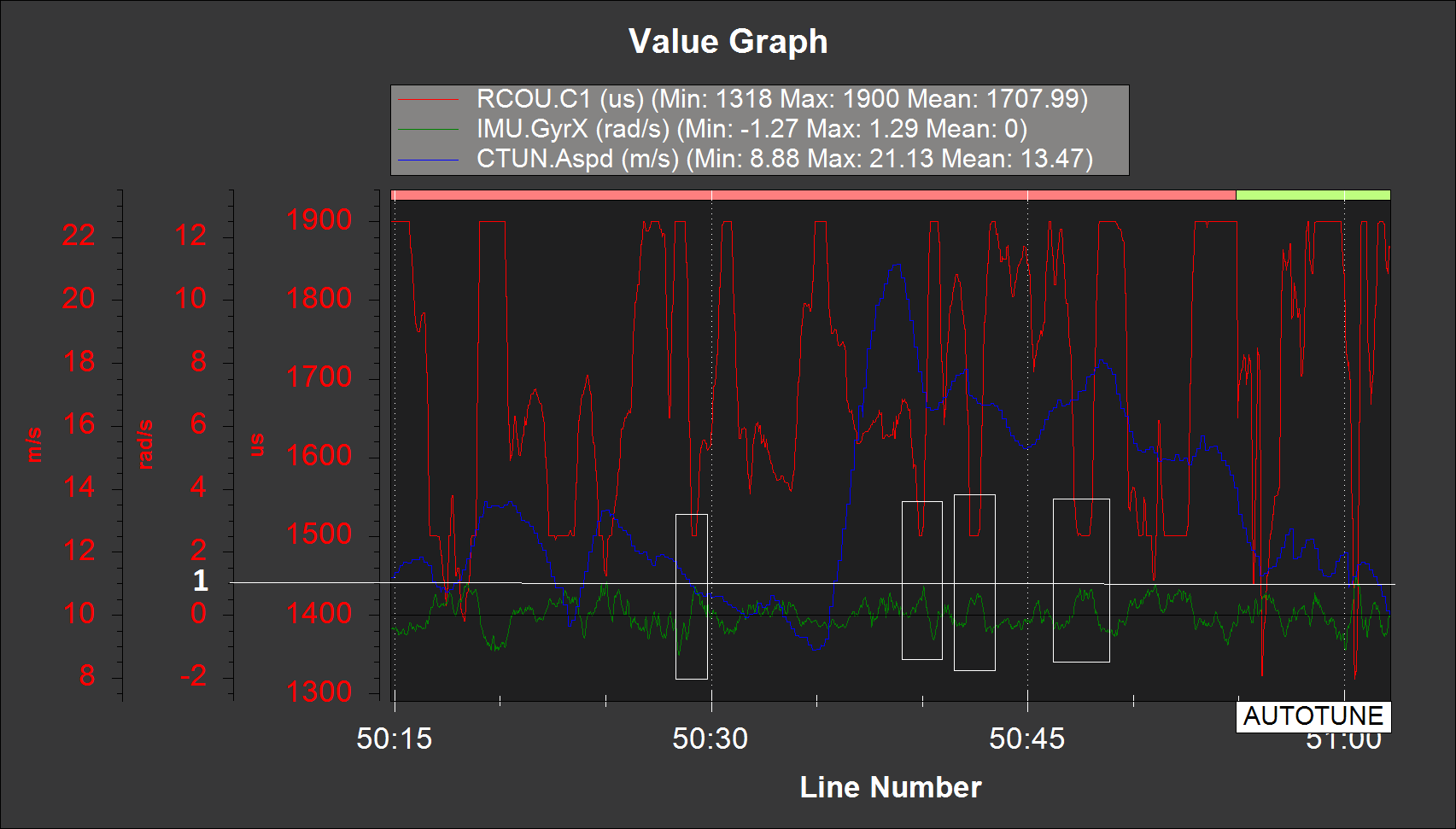 Although not so severe as this flight, I encountered a similar problem before. The RangerX flaps seemed to level with each other at 0%, but I term in roll controller was always greater or smaller(depend on the side) than zero, and the mean value of aileron output was away from the neutral 1500 value. But for our case, this imbalance only shows up when flaps are greater than 0%.

Not related to the roll/pitch problem but your board voltage values seem a little bit low. Try changing your power module to see if its around 5 V. Also your power flags value is 6. According to MAV_POWER_STATUS documentation, you are using a servo rail and USB port to power your pixhawk. Is this correct? 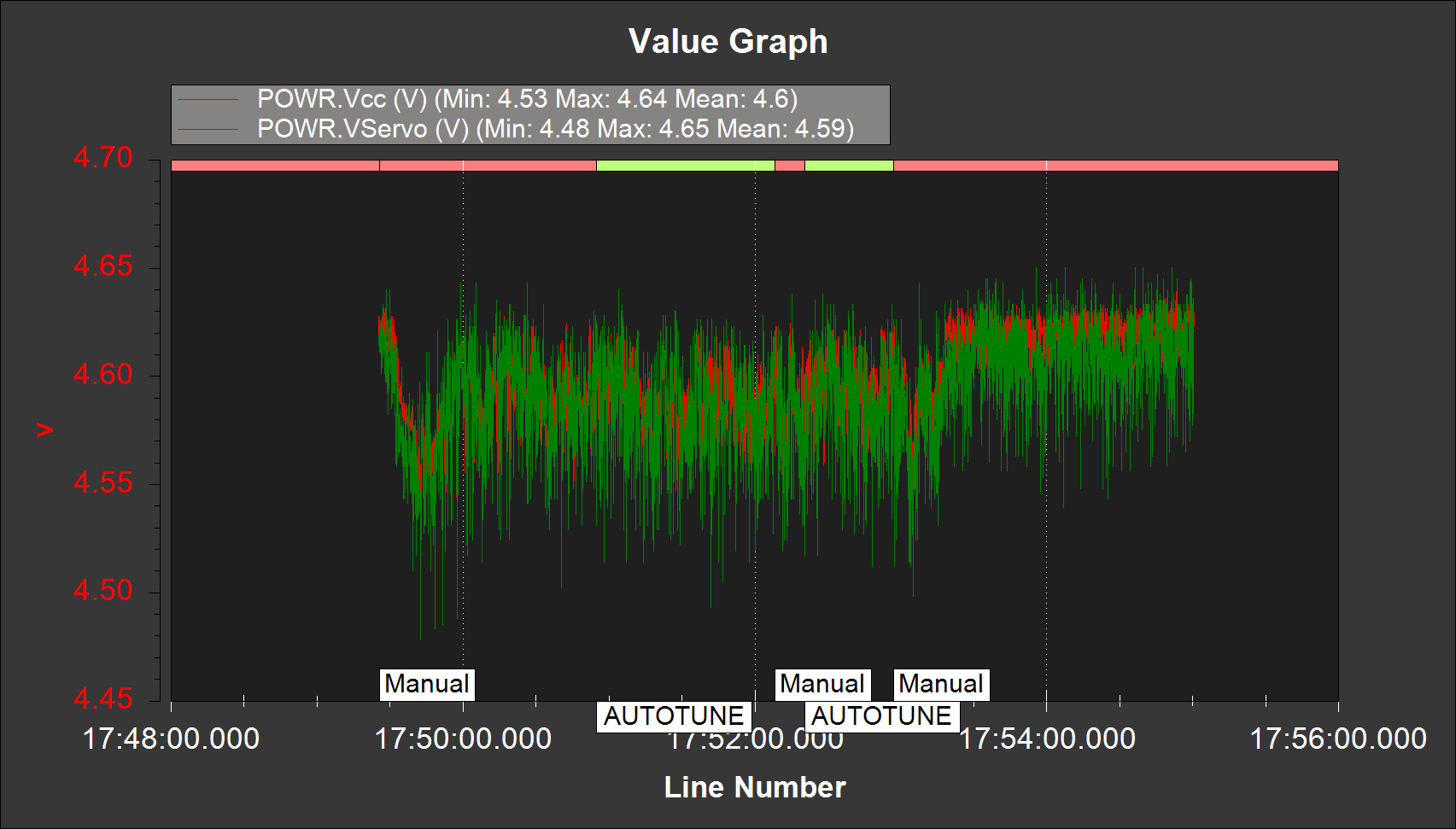 Thank you for your responses. very helpful. based on these I have made many improvements - reduced weight with one battery instead of two, more time spent finding the perfect CG, and improvements to each of the control surfaces by increasing servo travel. Did a follow up flight yesterday and it went very well. I would greatly appreciate feedback on how my logs look based on this flight. I have put together a video including FPV video, ground video and Mission Planner data, and the complete log file. Input my build is greatly appreciated!

I noticed the throttle rapidly oscillating up and down at a few points in the flight and don’t know if it’s normal, a config problem or a hardware problem.

also, the pilot felt it was very reluctant to bank while in Cruise mode. perhaps that’s my mistake for using cruse mode instead of FBWA mode. in manual he had lots of control, but in cruise mode, it did not want to bank much and made wide 50-75m radius turns.