Vibrations and clipping, but flying well

I recently built my first quadrotor drone using a tarot 650 sport frame. The flight controller is an mrobotics x2.1. The drone seems to fly reasonably well, but I noticed I was getting some VIBE alerts in the hud on mission planner. I was hoping someone more experienced than me could chime in and let me know if I should be worried.

The Z vibrations seems to be the worse, consistently above 30 m/s/s

Also, looking at Clip0 and Clip1, it looks like I’m getting some high numbers (clip2 is zero):

Are these numbers concerning? I have the FC mounted on an antivibration mount, similar to this. I’ve also balanced the props

Also, I didn’t get any compass errors, but the compass doesn’t look particularly clean to me:

I’ve also attached the log file if anyone is willing to take a look… thank you
https://drive.google.com/file/d/11bb6Hqaycrpdwy84F-5al0nE8f8dFtIc/view?usp=sharing

Yes, be worried. The numbers are concerning. And do the anti-vibration measures described in the wiki.

You should be very concerned. Usually about 12 is the maximum I would allow. It can affect your speed and position control if you have them.I have seen crashes because the accelerometers fused with the barometers affects the altitude estimation.

thank you both! I’ll work on the vibration isolation and try to improve that.

just a quick update… I just added some mass to the vibration-isolated plate that the FC is mounted to, and it cut the vibrations significantly… all axes below 10 m/s/s and no clipping at all.

Anything over 20 in zed is bad. I love to have you remove the isolation pad and test it. Some FCs work better like the Cube without them.

actually that’s the first thing I tried after posting this. Just directly attached the flight controller with double sided tape, but it didn’t improve the situation.

@grillmaster_tom
I too facing exactly same kindly of problem that you facing.
But here I’m using cuav v5nano Fc which mounted by 3M double side tape.

I too getting clipping more in primary and teritary not in secondary.

Did you found any solution or improvent?

Check the spindle for free play on your motors, this gave me high z vibrations but x and y were fairly low. Also any loose wires near the flight controller

That is a larger MR, 880mm and you can see how the arms are less rigid causing the z vibration to be sort of amplified. I’d imagine it would be similar on your 650 tho its probably built more rugged than mine (I stretched mine). Could possibly be props also, I’ve had some that were balanced but due to their cheap construction did not pass through the air smoothly and the turbulence added to the vibrations. I noticed this just holding the copter to the wind and the props spinning from just the wind

The fix was to use a press to push the spindle assembly together better.

We found the V5 Nano worked well on the old “4 balls” APM style antivibration mount. We had to cut some length out of the center of one we already had, but it wouldnt be hard to 3D print a new one the correct length. Width was fine.
Use one with the angled antivibration dampers, something like this 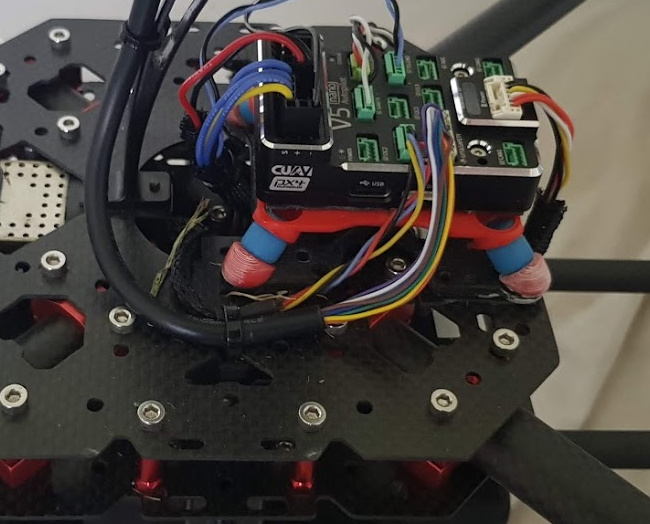 Thank you @xfacta i have followed you tips on antivibration and improved on vibe and there no clipping at all & vibe always below 15m/s/s/s in all axis. but still suffering with wind.

This is how CUAV V5 Nano attached with airframe. 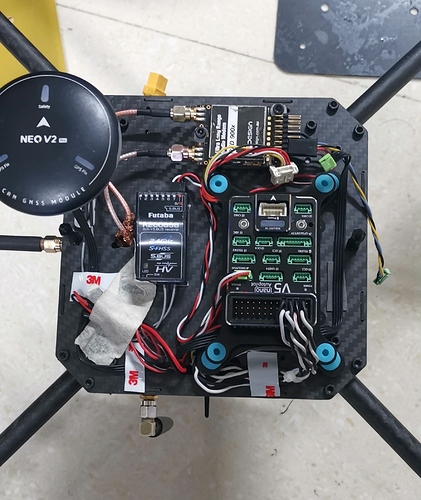 Your thrust/weight is too low which will cause problems for stability during command demands. Average commanded output at Hover ~1715us. The tune is poor but when it’s improved you will still have this problem.