Okay. So I’ve used my iPhone 6 and my OnePlus 5T and both of the apps always report my batteries as 87% at all times. I have two batteries and both of them have this issue, so I assume it’s the drone. I never get the low battery alarm on my transmitter either, even when it gets to the point where the drone can’t even get off the ground (I assume this is really bad for these LiPo batteries!!!). Any ideas?

The “first” battery alarm is a flaw in the Skyviper App not the drone or the battery. It is EXTREMELY conservative at best, and flawed at worse. I’m sure the company feels it’s better to be safe than have customer’s drones fall out of the sky, but generally the App will start annoying you when there is still 80% battery left. Also, if you switch to a Sport mode, the motors will temporarily cause the battery level to drop when you push hard, which will trigger the alarm as well.
If you switch to Solex ($30 which sucks) it’ll be much more accurate the the SkyViper App, and won’t have the annoying alarms…BUT you’ll lose the automatic UBLOX GPS file download which allows your SV to lock on much faster.

Also, through logging I’ve been able to pinpoint exactly what the battery voltage is right before the motors quit working, and I adjusted my Battery failsafe down significantly to get some more uninterrupted flight time. It is set at like 3.43 from the factory, but I pulled it down to be 3.37. That was conservative and ensures that on a windy day i have enough power to get back and land gently. I could have pulled it down a view more mVs, but I decided to stay safe. It’ll pretty much drop out of the sky at 3.33v. If you’re not getting the low battery alarm, then for some reason your battery fail safe may be disabled.

Btw, this battery is a “dumb” battery and doesn’t report anything on its own. It’s the drone that measures and reports the battery voltage.

Appreciate your response man. I finally gave up after trying all sorts of solutions and I’m now waiting for my new Wizard X220 to come in the mail

So where do I go to set these parameters? Mine’s doing the same thing

For the Skyviper the easiest way to set these is to access them through the web interface.

After connecting your device to the SKYVIPERGPS_ access point, navigate to 192.168.99.1 and you’ll get a webpage.

On the Flight Parameters page, you can search through the available parameters (filtered by the drop down).

Be careful though. These take affect immediately when you change them. However, if you do something and it becomes un flyable, you can always come back here and select “reset defaults”

Happy flying and welcome @jjohn7072 I believe this is the first I’ve seen you. There is a plethora of information on this forum for the SV and on the Copter Docs as well http://ardupilot.org/copter/index.html

Thanx for your quick response. I’ll try this.
I got a 2450 for Christmas and my grandson got it stuck in a tree. I ordered the 2450gps and got it this week (the same day the old one fell out of the tree).

You still made a good choice

It is set at like 3.43 from the factory, but I pulled it down to be 3.37. That was conservative and ensures that on a windy day i have enough power to get back and land gently. I could have pulled it down a view more mVs, but I decided to stay safe. It’ll pretty much drop out of the sky at 3.33v

What is the best way to find this lower voltage limit?

I just flew my sky Viper right above the glass grass, and then I just let
it sit there until the motors died. And then I pulled the date of flash to
find out when the motors die and I added some voltage above that for a
Fail-Safe. I wanted to make sure that I had at least three to four minutes
to bring the craft back to a safe landing no matter where the batteries
Fail-Safe kicked in. Your mileage may vary of course depending on how much
voltage your Motors are using based on their age. And how fast the battery
will discharge over time based on its age.

Interesting . . . that I just did a small sample mission a couple of hours ago and the SV literally dropped 20’ out of the sky approaching WP4. Apparently I failed to put in a fully charged battery. First for me. Manually I could have handled it but being on a mission it seems I had no control. I did use a TAKE OFF command at #1 and a LAND command at #7 (don’t know why 1 and 7 don’t show up)
Where are the log files that might explain this?
One other note . . . when I inspected the craft afterwards, one of the motors would not run. Don’t know if it was damaged from impact or failed in flight since both of these possibilities would be new for me. The SV just pancaked to the ground . . . is this what motor failure would do, without pitching? 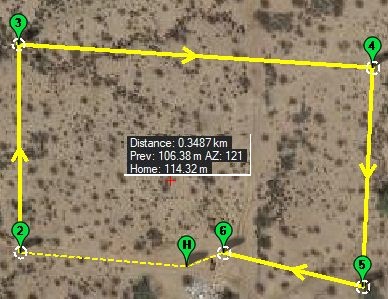 UPDATE: This must be what classic motor failure looks like. Ran same route on new SV and completed the circuit 3 complete times and almost to WP3 on the 4th (then Critical Battery Level returned to home) in a 15mph wind. Really moves going downwind! Will keep that in mind when planning missions for distance.

Question: When I use the LAND command in Mission Planner (see above) . . . is it normal that I have to power cycle the SV before I can run the exact same route again? The SV seems to stay armed (steady LEDs) but will not respond to throttle-up.

I can’t remember but I’m almost certain I’ve seen that same behavior on my Solo. Although that’s a slightly different AP build. But I remember once having to land, turn off and back on to re fly the mission. Not sure why, or if that is expected behavior or not.

Also the SV has special “crash detection” and “obstruction detection” logic, so if one motor died, that probably kicked in and stopped all motors from spinning, rather than the other three motors trying crazy things to keep itself in the air.

Guess that’s the downside of flying over parked cars . . . with your contact info imprinted on the frame . . .

Are you trying to say something happened? A Walmart parking lot is not a good place to set waypoints…

Something did happen but not in the parking lot . . . shouldn’t you be able to fly an uploaded mission outside the app using just the Tx after GPS lock? A mission well out of Tx range.

Either on your GCS (most convenient…), or off hte SkyViper’s filesystem.
You can browse that filesystem using a web browser. keyword “dataflash”…

I forgot I had one of the battery alarms for my cheap DJI clone. Made a harness to connect it inline of the battery and taped the SV down to a saw horse. Interesting the voltage drops and recovers when the motors spin and stop. Here the app claims 12% but the meter shows 3.88 volts. 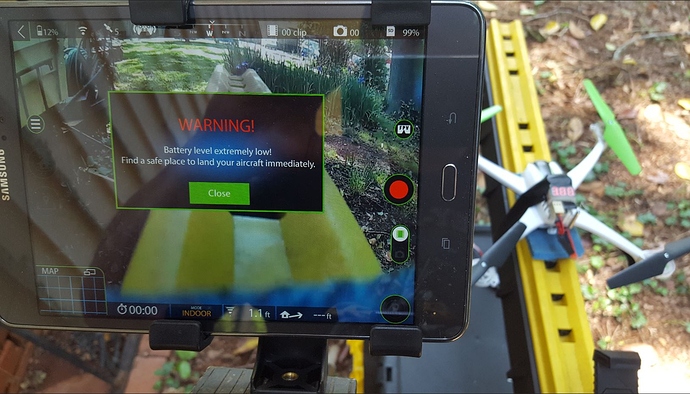