Greetings to you, earthlings! For several years now, I have been trying to build my airship. The idea is quite simple: the airship does not need energy to maintain a height, and the area of its surface is large enough for the effective placement of solar panels. Thus, we theoretically have a drone capable of being in the sky for a very long time.

The idea is so simple that once I wondered why it has not yet been implemented? At first I began to study the theory, then other projects, and then I realized that I need to try to do it myself in order to understand why no one has done this so far?

At the moment, I faced a lot of problems, but I never found, the one that would make this project impossible. Difficult? Yes, but quite real.

As a start, I decided to make an unmanned airship. Relatively small (by the standards of other airships), but large enough to have practical use (this is not a toy, for home use). The main application for it was to be environmental monitoring (early detection of forest fires, monitoring of animal populations, the search for missing people in the mountains, etc.).

I built the first airship about three years ago, it was made in bush craft style, it took only about two weeks to assemble (sleepless), but worked kind of ok. 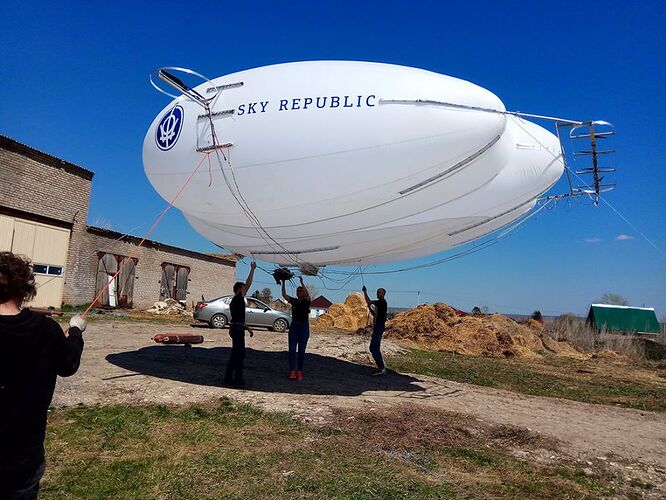 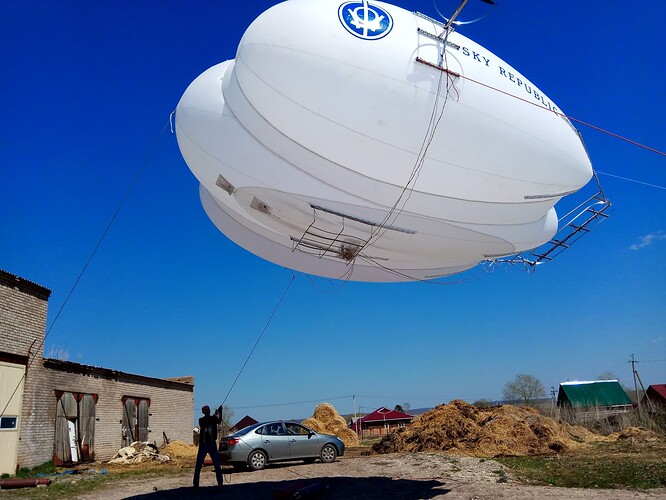 Almost immediately, the problem of its stabilization in the impulsive (gusty?) wind was discovered, I was ready for it, this problem was described in books, and planned to apply the stabilization system (approximately the same as in a quadrocopter), but I broke the airship (well, not me, but a hurricane to be precise) before I made such a system.

After the first crash, I decided to go “more professional” way, I found the hangar for storing the second version of my airship, and decided that I would make high-quality mechanics first, then I would write my own autopilot softwere and then I would start farther tests.

All this turned out to be quite difficult (who would have thought?), I did all this on my own and with the help of friends and enthusiasts. But over time, I found that I have nothing to eat)) It was not easy to combine such a project with making money. But so, I did’n want to take money from the government (because I live in Russia), and it seemed dishonest for me to look for private investments, because I «could not guarantee» it that everything would work out.

One way or another, I made a mechanic, and took up the creation of an autopilot. I thought that I was about to finish and I could bring the project to the market soon…

But, these criminals started the war … I thought that now humanity needs to solve problems like forest fires and recycling of plastic. Wars in the 21st century!?

Sorry for the lyrical digression, I turn to the essence:

I realized that I need to accelerate. I am not quite competent to finish my autopilot fast, but I discovered that ArduPilot has made great work in this direction. A friend gave me Pixhawk2 Cube, and I decided that it would be faster to adapt it to my system than to do my own.

I am already reading the documentation on Ardupilot Blimp, and try to figure out what’s what. But I am a corrupted by Arduino and my typical code rarely has more than a thousand lines. Therefore, I will be glad to any advice. As far as I can judge for the ArduPilot community, it will also be useful to experience this software on a real airship. Perhaps my airship is not entirely real (classic), I have redesigned a concept a litte to simplify the takeoff and landing in the presence of wind, and changed the shape for more efficiently place solar panels and reduce the side wind load.

So, I decided to open this topic. I hope I correctly understood the rules of the community. I will be glad to any participation. I’m not a great master in communication with people, but I will try my best)

If it interesting, I will post the configuration of my motors, servos etc.

Very Interesting and congratulations on what you’ve accomplished so far! While I likely cannot contribute anything worthwhile to your project (I’m currently working with mowing rovers) I look forward to watching this develop! Onward!

Well, I think it is good idea, to show you mechanical schematic of the vehicle. 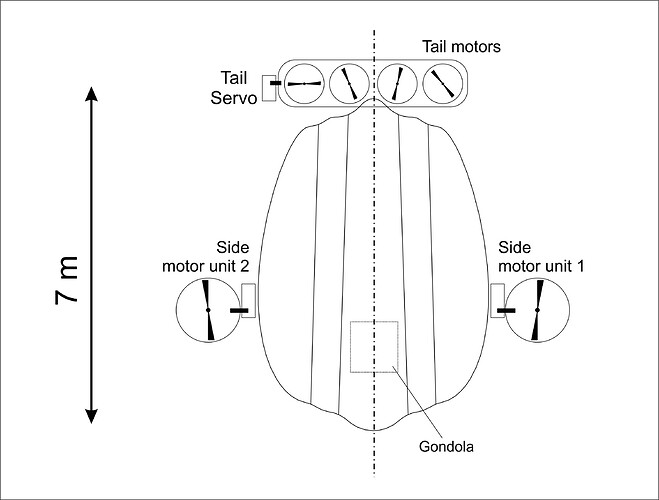 As you can see, there are two side motors (Thrust 8 kg), and servos to tilt them forward and backward. Tail assembly is almost the same, except that there are 4 motors set (2 kg each).

And the question is: how to control it?

I used to use RS485 with my own Arduino Mega controller and it even worked, but now as I want to use ArduPilot and PixHawk2 I’m going to use CAN bus. So I think it should be something like this: 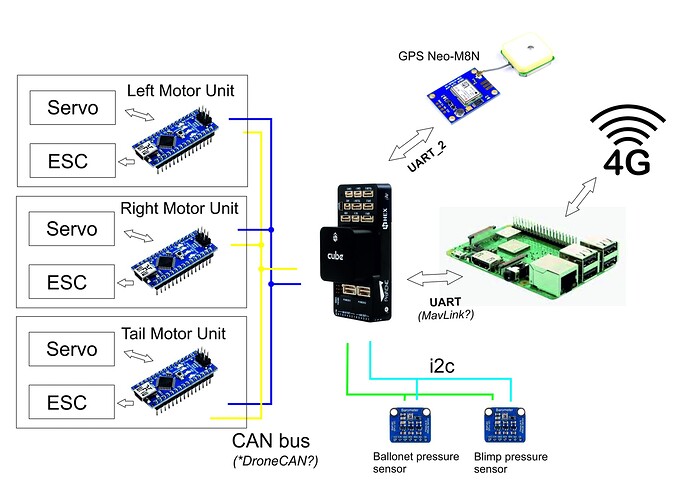 Does it seems real? Can somebody navigate me to how i need to change ardupilot source code and compile it? I already diging in WAF and so on, but if there are any advice, I will be glad to read them))

Is it appropriate to tag people, to let them see this topic? Some forum search brought me an information, that @MichelleRos could be interested, sorry if I’m wrong.

@SkyCitizen
Very cool project! What is the intended use of this blimp?

Seems nice! Did you use standard “Blimp” code or compiled it yourself?

Hi, thank you! There are two main useage for this drone I’m thinking of :

Hmmm… Rather new with CAN bus, and also it is seems quet difficult to get Matek L431 for me now. And I realy don’t want to replace the arduinos in my motor unit it is a part of “Servo” I made. But, you gave me an idea: if it is possible for Matek L431 to be a CAN Node, then Arduino or STM32 could become one. I think I will try to inject DroneCan in my code, after I deal with Copter and Blimp documentation, and understand how ArduPilot works at all.

Thank you! Will tell you about results!

Hi, thanks for tagging me - sorry I haven’t been checking discuss as often as I probably should. This is a really impressive project - and monitoring is one of the applications that blimps are best suited for.

The Blimp firmware currently only supports the flapping fin design as described in the documentation, unfortunately. However I’m hoping I or someone else can add the more common blimp designs soon.

Blimp firmware is still fairly new, so it’s not exactly “feature complete” yet, but I’ve mostly been the only one working on it so far, so progress has been a bit slow.

I did separate out the fins class in the code with the intent that further functionality could relatively easily be added to switch from the finned frame to one that uses various layouts of propellers. (The control algorithm outputs required forces in the X,Y,Z and Yaw directions, and then the fins class translates that into flapping motion, so it could be switched to different frames similarly to how Copter handles frames.)

As far as hardware, I’m not too sure what the Arduinos are needed for? If it were me, I’d just plug the ESCs’ PWM input straight into the Cube’s PWM outputs and deal with the ESC and servo commands in the ArduPilot firmware - you can do the motors via CAN instead if you prefer, but I’d suggest starting as simple as possible (direct PWM) and then adding CAN later.