OK, I am completely lost. I am seeing a “FAILSAFE” error on the HUD and in the Messages tab in Mission Planner, but I am failing to see why. I have set the FS PWM to 1000 (or lower), and the RC radio is emitting throttle signals above 1000 (it’s actually 1001 at lowest throttle). Why is the copter in failsafe mode?? 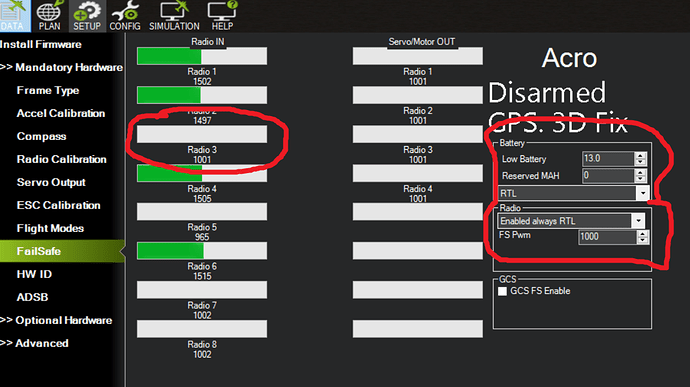 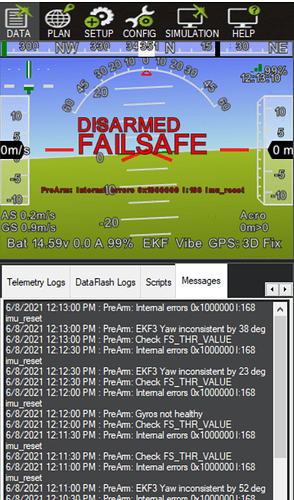 Any thoughts of what might be happening? Why the failsafe??

Your failsafe value is too high. Turn it down to 975 and see if that makes the problem go away. Some times if the TH_failsafe is too close to the min throttle value you’ll get these false alarms.

Unfortunately that doesn’t make a difference. I set FS_PWM to 975, 965, etc, and the HUD still reports “FAILSAFE”.

When you’re on the failsafe page does the throttle input move with the stick?

I don’t know Futaba radios/RX, what does it set up for failsafe?

What do you mean by “what does it set up for failsafe?”. I can set the failsafe behavior in the TX to whatever I want. Currently it’s set to send “0%”, which I believe corresponds to 915us. I tried various values between 915 and 1000, and I still see “FAILSAFE” by default on the HUD even when the throttle is always above 1000.

This seems to be a problem with 4.1-dev and 4.1.0-beta. I switched back to 4.0.7-stable and the “FAILSAFE” condition on startup went away, as one would expect. However I am seeing other issues with 4.0.7 (“gyros not healthy” errors) – I will start a new thread on those.

If you don’t know how things work you have no business running dev or beta firmware.

I highly recommend you spend the next several days reading the documentation.

There are numerous things that trigger a fail safe and it only takes on to leave you grounded.

On some systems you can set up the radio failsafe as “no pulses”. This means the RX will basically stop sending a signal to the flight controller. That will trigger a radio failsafe regardless of the throttle position or output.

Interesting that 4.1 is causing an issue. Might be worth posting that on the 4.1 forum and letting the dev’s know. If it is a glitch unique to 4.1 they may have some insight to the problem.