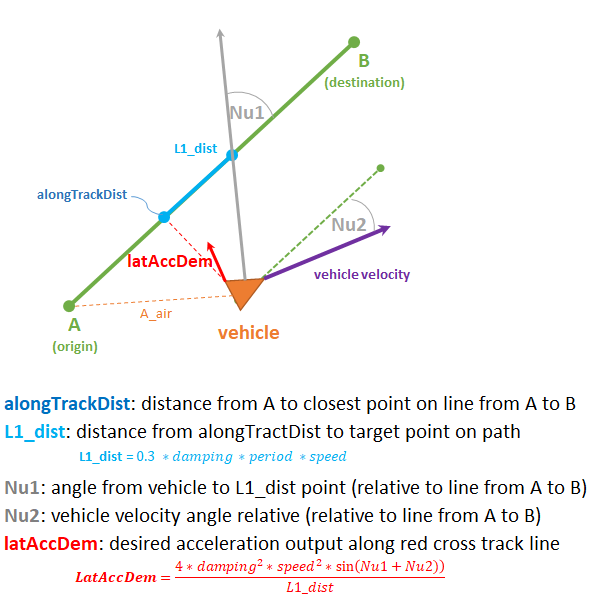 rover-L1.png596×610 25.9 KB
As part of improving the the developer wiki, we’ve added a page that attempts to explain how Rover is using the L1 controller.

It’s explained in more detail on the new page but in short:

Hope this is slightly interesting to others. As per usual, if you want to get involved with development, check out the “Getting Involved” section on the top page of our developer wiki started section of the wiki.

Here’s a link to the original paper that this is all based on:
http://mercury.kau.ac.kr/park/Archive/PCUAV/gnc_park_deyst_how.pdf

I’m not so familiar with Rover or Plane, but I understand that Plane also uses an L1 controller. Are these same principles applied also to Plane?

Rick,
Yes, I think so. The exact same library is used for both Rover and Plane although there may be extra features that Plane uses. I’m not sure because I haven’t looked into plane that deeply yet, only deep enough to create the basic plane architecture and now this L1 page.

Hi,
I have question related to position control via L1 controller.
I have seen this in plane documentation:

As I understood the L1 controls the vehicle travel horizontally. Is it possible to change/tune it to be able control vertically as well?