I am unable to install Copter 3.5.rc7 for Heli on my PH2. I am sure this is firmware issue because I get this error on two different PH2. I tried a different PC still same result. I can install Copter 3.4.6 without any problem but not 3.5. Is anybody else having this issue. I get the following window when I try to install. If I download the firmware and use the custom firmware option to install it even then I get this error. 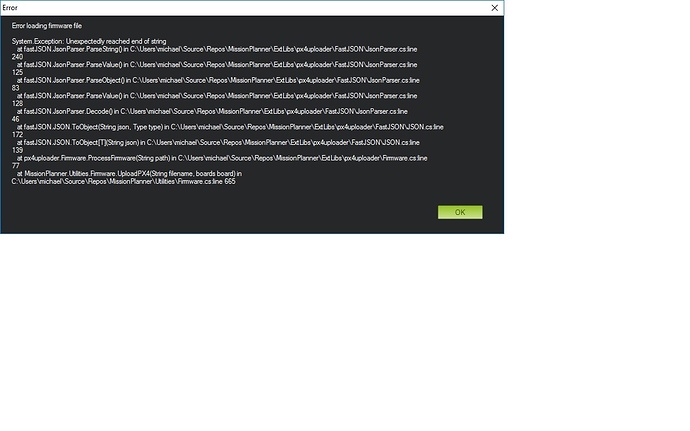 Some folks had luck loading rover, then load 3.7
Mine worked fine upgraded from 3.4

I think I found the issue. There is some issue in downloading the firmware. The complete firmware is around 815kb. However when we download only 200kb is downloaded which the upload software is unable to parse. Wget is able to download the whole thing by reconnecting after a part is downloaded. I do not know why this is happening only with Heli code but now we know why this is happening.

Also, try holding the arming switch while uploading the firmware. I’ve seen several people having issues with 3.5 and solving it this way

This issue re having to hold down the arming switch came up on this week’s dev call. We have a fix but the issue is in AC3.4.6 apparently so we might need to release AC3.4.7 with this fix to ease the upgrade.

Until then we will add a note to the “upload firmware” wiki page.

thanks for testing and reporting back!