I´m wondering if it is possible to override channel 1 and 3 during auto mode with set servo1/3 commands? Or are they locked?
The idea is to have a mission with a skid steered boat, at some point the boat gets a delay command, say rest for a minute, and during this rest the boat should turn on point.
Theoretical solvable with left thruster in one direction, right thruster opposite direction.
As I haven´t my boat by hand right now to test it, it would be great to figure out this issue under “dry conditions”.

I’m afraid that while the outputs are being used it’s not possible to override them… or even if it is the outputs will immediately be overwritten by the motor library.

I think in very recent versions of Rover if the vehicle is told to delay at a waypoint it will actually loiter there. Sorry, I’m not quite sure if this was included in Rover-4.0.0 or not.

If the desire is to turn the vehicle to a particular heading then the NAV_SET_YAW_SPEED command could be used. I don’t think MP allows this command to be easily added but it should be possible using the “UNKNOWN” option and set command to 213, 1st column to the angle (in degrees), second column to the desired speed (in m/s) 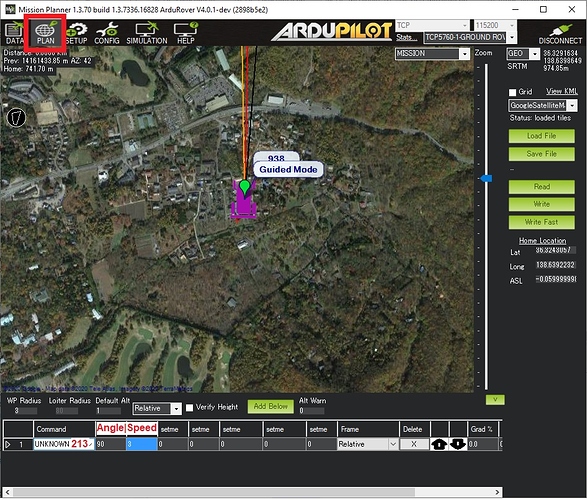 That sounds great! Thanks a lot for the hint. I will test it as soon as I am able to.

I have tried the NAV_SET_YAW_SPEED aka 213 out. Quite good choice for that what I need. Not optimal, but for continuous rotation I could split it in several 360degree/3 commands. But the boat´s yaw speed was way more high and harsh at the beginning than the yaw speed that is set for auto mode. Looks like it starts turning at full steer as being in manual mode, and then after half way it slows down.
Yaw speed was for example 0.2, but aggressiv turning.
Or did I something wrong?