this is my seconds loss this year. I followed the tuning guide, and the system behavior was pretty good so far.
This was the first autonomous flight with L1 navigation in a figure 8. I accelerated slowly the speed.
in stabilize, I checked the speed up to 25m/s and everything was fine.

during autoflight and slow acceleration, the helicopter started shaking heavily and a second later the complete system exploded. there was no time for me to react…
altitude was ~60m AGL, speed ~23m/s.

I am confused. tuning was straight forward.
I equipped the TREX600 with 3 6s lipos instead of one. so the disc load was much higher.
but I did the tuning in this configuration. And I could not see any problems. 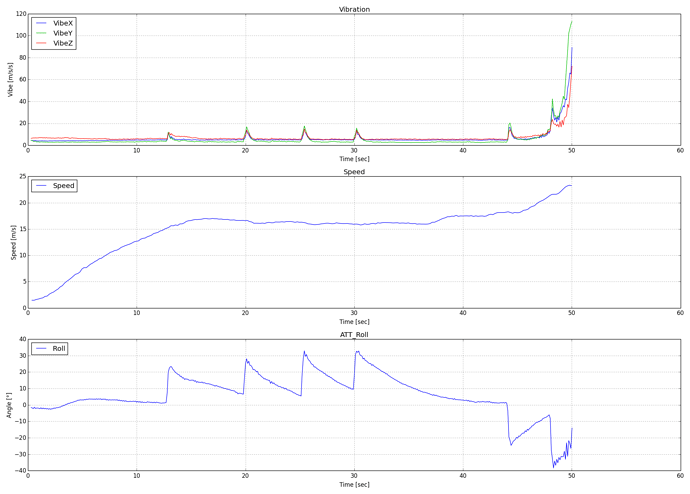 I hope somebody can help me investigating the issue.

Patrick,
I’m sorry about your crash. I will look at the logs when I get a chance. Do you have the tlog in there as well? It makes it easier for me to see what kind of route you were flying.
At first glance this looks like a tuning issue that caused an instability that became divergent/catastrophic. At higher speeds, the flight dynamics of the aircraft can change and make it more susceptible to instabilities like you see when tuning the aircraft in a hover. So your hover tuning values (P and D specifically) may be too high for forward flight. The aggressive control inputs of the L1 controller don’t help because it puts a lot of excitation into the rotor. You said that you had flown the aircraft out to 25m/s in stabilize mode. Did you make aggressive inputs like the L1 controller was making?
The other thing we can’t rule out is a component structural failure or fastener failure. Note how the vibrations are fairly low up until 45 sec except for when the aggressive control inputs are made. By the way, your vibes look really good. Its not often that I see the lateral vibes (Y) lower than the other axes and they look less than 5. Really good! But notice that they start growing right after the roll out to 25 deg at roughly 45 seconds. Then on the next roll input they start to increase pretty drastically.

Not ruling anything out. but this doesn’t appear to be an issue with the L1 controller other than maybe exacerbating the problem with aggressive inputs. Could you post the logs from tuning P and D terms, if you have them? Also the log from your flight to 25 m/s in stabilize mode. Right now I’m concerned that you may not have all of the data I would need to determine what happened. What was your log_bitmask?

Again I feel terrible that you lost another aircraft.

Hi bill,
I will check for the files and upload what I have later on.

This was my first setup with a flybar helicopter. it was very different in the beginning. I saw oscillations very soon, but at the end, I found good parameters (I thought).

I am still planning to build a new helicopter (bigger size, bigger budget) - but this time it should be safe… so I am looking forward o get your help.

This was my first setup with a flybar helicopter. it was very different in the beginning. I saw oscillations very soon, but at the end, I found good parameters (I thought).

So this was a helicopter with a Flybar?? Wow, in that case you really shouldn’t use P and D in tuning. I mean you can but that can definitely cause problems. Did you set the flybar parameter or just leave it at default?

Yes flybar.
I checked a post of @ChrisOlson how to tune with flybar. After p and D was set to zero, it was said that tune these too with lower settings.
But I guess this is some root cause

Flybar was set to enabled.
I will also attach the parameter file later.

here is the link to the TLOG file. 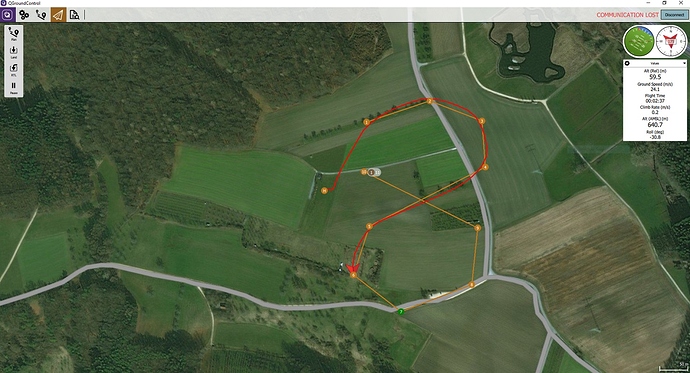 but to be honest: there was some more PID tuning in between…

Patrick,
After reviewing the log file from your flight, I didn’t find anything that points to an issue specifically with the L1 nav controller. All commanded inputs seemed reasonable. There was a lot of oscillations in the rate controller pointing to higher than desired feedback gains like P and D.
I also looked at you flight in stabilize. Didn’t notice as much feedback oscillations. You pointed out that you flew out to 25m/s but it didn’t look like you spent much time at that speed. So wasn’t much to look at for stability issues.
I haven’t tuned many flybarred heli’s so I don’t have much to offer for advice. I think the key to tuning them is not to use P and D. Instead adjust your flybar to get more or less damping. You can use I gain to get it to hold attitude. The flybar should be more tolerant of that. But with any tuning, if you see the oscillations when your making sharp inputs then you need to back off on your P and D gains. I gain can cause this type of behavior but it requires a lot larger value.

Thank you Bill.
tmy flybar autopilot project was running over some time. I checked several previous discussions and noted this statement:

550 Trad heli Pitching, could do with some advice?

So instead of leaving P and D at zero, I did some tuning.
In the end, I would set the following conclusion:

Root cause is wrong/unnecessary P and D tuning

Bad cricumstances:
-the additional weight 3 battery packs instead one)
-not enough time to check for oscillations in stabilize mode
-run into vibrations too fast during accelerarion