We have got two flight with the same Mission File as base, but the second mission was modified to include some pattern flights. We started both Missions in the same place, just 10 minutes inbetween.

The first flight was perfect, but in the second flight the plane did not climb but started to transition, right when he hit auto in 5m height.It just switched to transition right away and accelerated to 25m/s. Nothing crashed, but it was too close to the ground to be safe.

The files were planned with qgroundcontrol/variant of it. We set the takeoff (which is for plane) then set any waypoint which we change via the menu to VTOL takeoff, delete the plane-takeoff and move the VTOL Takeoff to designated starting point. The plane normally does the transition above the point where we switched to auto. So if we use 40m transition height and switch to auto in 20m height, then the plane would do the transition in 60m AGL. After saving the file and reopening it changes the 40m to 0 meters as altitude, but it is still saved as 40m in the “show all values” menu 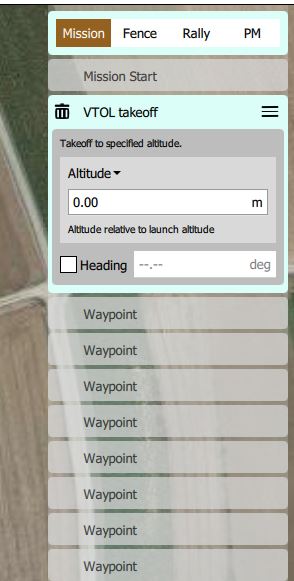 any idea why the plane did the transition in the second mission right away?

Any idea why the plane did the transition in the second mission right away?

Have a nice day and thanks in advance

Playing back the logs in MissionPlanner, I see that the on the first flight, it started the mission normally. On the 2nd, it started on waypoint 2, and had been showing 2 as the next waypoint ever since telemetry was connected.

I don’t use QGroundcontrol, so I can’t look at your .plan files, but I extracted the waypoint information using the Missionplanner utility and found that both missions flown had a VTOL_Takeoff with an altitude of 60m as the first waypoint, just as (I presume) you intended.

On the first flight, everything went normally, but on the second, the 1st waypoint (the VTOL takeoff) had been skipped and thus the transition occurred as soon as you entered AUTO mode.

I’ll leave it to someone more knowledgeable to dive into the .Bin files and confirm why it started on waypoint 2 instead of 1, but I can at least say that it wasn’t a fault in your mission planning.

Hi, thanks for your answer.

Yes, that is the exact issue, i can also detect via the log and which is also what happened in flight.

But what caused the jump to the next waypoint?