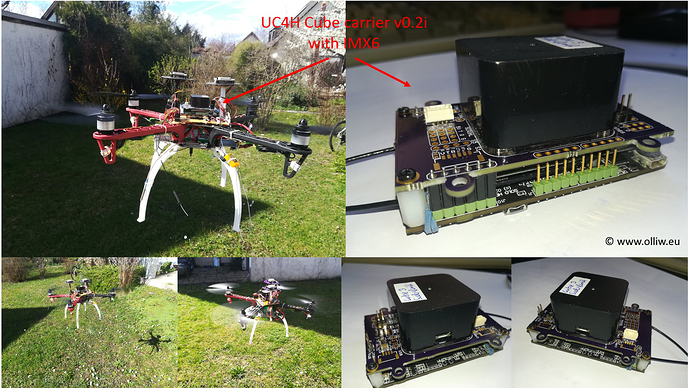 Sure, I’m really not the first doing a 3DR Solo brain transplant, but here is my twist:

As part of my UAVCAN for Hobbyists (UC4H) project, which brings CANbus devices to ArduPilot drones at a small cost and with unprecedented completeness and feature-richness, I’ve designed a UC4H Cube carrier board which snugly fits onto the IMX6 of the Sololink.

I call this the Ultimate 3DR Solo Brain Transplant, since it’s so much cleaner and more compact than re-purposing the Solo motherboard or using one of the available Cube carriers with the IMX6 somehow connected to it.

Moreover the UC4H Cube carrier for the IMX6 is also incredibly cheap, since it requires only very few electronic components and is a simple double-layered print board. Yet it is fully functional. It also brings all the benefits of UC4H to the copter, such as UAVCAN ESCs, dual GPS, and much more too numerous to be listed here. However, it of course can also be used in more conventional ways, by adding few, available modules.

IMHO, a 3DR Solo Brain Transplant hardly can be cheaper, easier, more compact, more functional, and snuglier than this

So, this build had to be tested. And indeed, the first couple of test flights were – not unexpectedly – perfectly successful.

The next, and ultimate, step would be to attach a T-STorM32 gimbal to the copter and demonstrate smart shots. Not sure when I’ll do this however, it’s really quite windy these days in my area, but this will come in a not too distant future, that’s for sure!

One might argue, isn’t this coming too late, the Solos are dying out? Sure, more and more Solos are going to be taken out of operation, because of a lack of replacement parts, mostly for ailing batteries, but also motor pods, broken shells, and so on. However, the cube and the IMX6 will probably be still OK for the large majority of these Solos, as well as the Solo controller. There thus should be 10000ends of them around, and waiting to be sold cheaply and be put to good use again.

And after all, the Solo black cube + IMX6 + Solo controller still provides most attractive features, and these days also by far the best bang for the buck. These are good times for 3DR brain transplants, I’d say

I’d like to grab this opportunity to sincerely thank Mike Kelly, for all his background testing efforts and sharing his Solo knowledge with me. Thx, sir!

And you guys, have fun,
Olli

Very nice !
Did you have a video of the drone flying ?

I didn’t had a gimbal installed, so no video
but this is certainly to come

Hi Olli, I just found this post. Did you create a carrier board for the original Solo Cube Pixhawk? Or is it for the PixHawk 2.1 or the Green Cube. I have 4 Solo’s and want to mod one. I also have a 3DR Y6, X8 and Aero, and a onagofly turd. - Nice work!