TKOFF_THR_SLEW not respected in auto takeoff

vtol tricopter
TKOFF_THR_SLEW are not respected in automatic takeoff. Both CH 5 and 6 engines immediately go to 100 percent 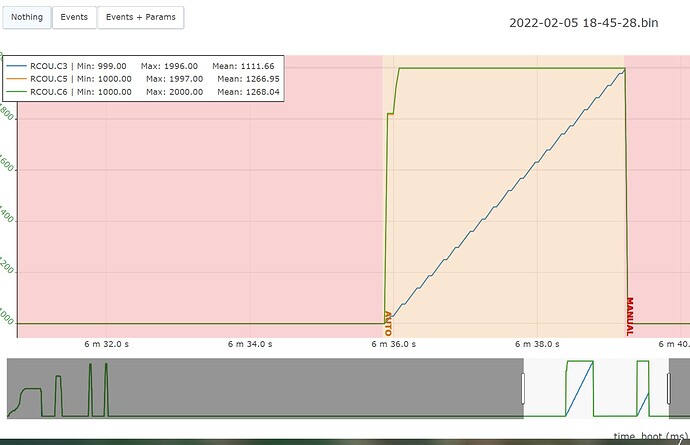 Tridge or someone else Help

i want to take off from the hand and let the engines speed up gradually.
but there is no parameter effect
TKOFF_THR_SLEW = 20
Whether this parameter has an effect for the VTOL aircraft

I can report that throttle slew still works fine for non-VTOL aircraft in the latest version (4.1.6).

Here’s a short view of the CTUN throttle and RC3 out (which is one of my 2 throttle channels:

You can see both the advancing and retreating RC out values take some time while the CTUN advances and retreats are straight up and down.

But I have a VTOL aircraft with two front engines (Ch 5 and Ch6) and besides TKOFF_THR_SLEW = 20 the engines start right away.
Ch 3 shows the required deceleration, but it has no effect on the Esc of my engines on Ch5 and 6

I suspect the slew limits may not work for VTOLs. Slew rate limiting obviously can’t work for the lift motors since those throttle change delays would undoubtedly result in flipping the aircraft. Since those motors can’t use it, perhaps it was left out (on purpose or inadvertently) for the forward thrust motors.

If you want to check if that is the problem, you could set it up as a conventional plane to see if the problem persists.

Sorry for my bad English.
My plane is VTOL, tricopter Y3.
i want to take off like a classic twin-engine airplane, automatic take-off Hand Launching.
due to the stability of the launch, I want the engines to gradually accelerate.
the TKOFF_THR_SLEW parameter does not return results.
the chart shows Ch3 has a gradual increase but my motors are connected to Ch5 Ch6 and they start right away.
means TKOFF_THR_SLEW affects Ch3 which is not connected to any engine and has no effect on front engines on Ch5 and Ch6

I looked at your file.

You have the SERVO3 function set to 70. That’s correct for a single engine throttle (and it might work for both channels on a twin if you don’t want to be able to control them independently.)

SERVO5 and SERVO6 functions are set to 33 and 34. These value are used to identify Motor1 and Motor2 are connected to these channels…they are 2 of the motors used for vertical thrust…not horizontal thrust.

So CH3 is doing slew correctly because it’s configured to control a forward thrust motor. Ch 5 and CH 6 are not, because you have configured them to be VTOL vertical lift motors.

SERVO3 function should not be set to 70. If nothing is connected, turn it off by setting it to zero.

SERVO5 function and SERVO6 function might be set to 70… or better yet, set the left one to 73 and the right one to 74. That will have the same effect (unless you someday want to enable differential thrust and use them for yaw control.)

I believe throttle slew will only work on motors identified for horizontal (forward) thrust. With a SERVO function value of 70, 73, and 74.

And I’m confused by your plan/goal. It’s a VTOL, but you want to take off in auto mode with the forward motors in horizontal mode? Doesn’t auto takeoff mode expect to start by doing a vertical takeoff and then transition to forward flight?

sometimes to save energy, I want to take off like this (out of hand) 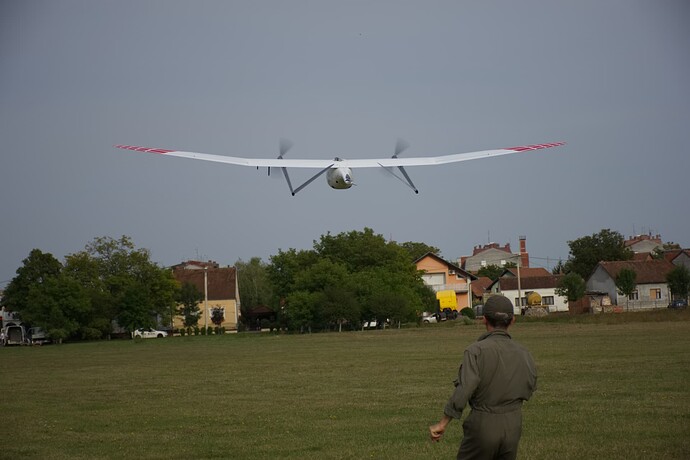 Another question for you. You talk about stability during takeoff. With a twin and counter-rotating props, you should be able to use full thrust w/o creating takeoff problems. Have you seen problems from launching with full thrust?

I only use throttle slew to coordinate the throw. I shake the aircraft and the props start up. I hold the plane until the run up is complete and then release it. The gradual ramp in power allows me to see that auto has actuated and the run-up gives me a second or two to verify that I’ve reached full power and it’s ready to release. But, the release is at full thrust, so slew is a nice-to-have rather than essential. It just enforces the discipline that one releases at full power, NOT when the props first start to spin.

And auto supports that?

when I spoke of stability I thought to myself, that great traction does not destabilize my body.
it takes me 1 to 2 seconds to check the success of the engine start and to launch before the traction force is too much for my body

Good point. And that’s about how I do it…it’s time to release when it feels like it’s trying to rip my arms off

You may get someone who knows better than I whether there’s a way to put slew limiting on those motors. I doubt it, because.I think there would be significant risk in controlling slew at some times when at other times the control of slew on the same channels would lead to catastrophic loss of attitude control.

If it’s not currently a supported feature, I suspect it would be very hard to get someone to add the feature (unless perhaps you’re willing to hire a software developer to do the work).

One more thought. You might be able to program your transmitter to ramp power and set a slight upward pitch so you could take off in FBWA. It’s a bit scarier to have the throttle on a timer than to use the accelerometer in the FC, but a takeoff switch that started a timer to slowly advance throttle after a few seconds delay could accomplish something similar to an auto takeoff. With neutral roll and slight upward pitch programmed in, you might get acceptable flying till you can get hands on the controls.