There’s another similar topic as well. Might be a serious bug. Lost throttle control in manual mode - full throttle!

I start a mission with Auto take off. The airplane takes off wide open as normal, then heads to waypoint 1. I notice it’s flying really fast. Take a look at the laptop and it’s flying at 24ms. Just happens to be FBW max. I let it go for a few more legs of the mission and it stays at 24ms. Should be 15ms. I check my throttle stick to see if I can nudge the speed, but no change when I move the stick. It’s like I have the throttle stick all the way up, but it’s not. So I switch to RTL and still flying 24ms. Switch to FBWA. Still full throttle. I go back and forth between modes to see if I can shake the full throttle. Finally the airplane responds to the throttle stick. Manual land. Here’s the log: https://www.dropbox.com/s/egpdsmu1j0wl9ez/Stuck_wide_open.log?dl=0

Here’s a graph of RC3 in. Looks like I have the stick full throttle. But I assure you I don’t. But the plane was behaving exactly as it should if the TX were set to full throttle. 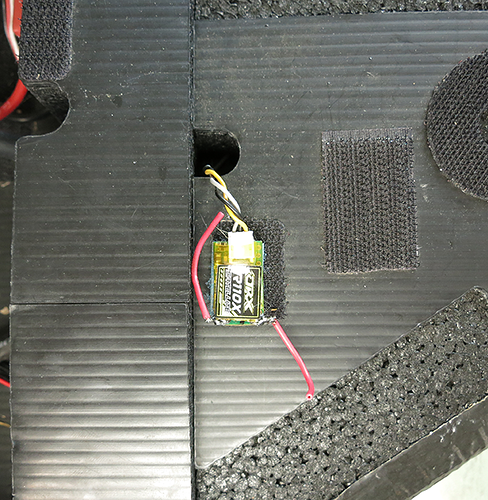 Any ideas? Maybe it is a bad satellite or TX. Will fly again with a new satellite. Also, RRacer is using a similar receiver. Lost throttle control in manual mode - full throttle!

Have you checked the failsafe setting for your Rx?
Although the mode changes indicate that the radio link was working.
If your range is compromised and the throttle failsafe goes high that would explain whats happening.
But then you wouldn’t have been able to change flight modes.
Does your Tx have a channel out monitor?
Would be worth watching that for any abnormal outputs.
Do any other RCIN values look wrong?
Looks like a Tx or Rx problem to me.

Thanks for the reply. Other RC channels were fine. I had complete control over the airplane, except throttle. The Pixhawk limited it to 24ms, so it was still controllable. RC Failsafe for 20 seconds will cause the airplane to RTL, not throttle up. In hindsight, turning the TX off would have been a good test to see if airspeed would have dropped from 24ms to 15ms. I don’t think a DX8 has an RC out monitor. But I agree, it seems like a TX RX issue.

@bchristal,
This does indeed look like a RC receiver problem. I’d do ground testing and see if you can reproduce the problem. Note that the issue RRacer had was completely different (see my reply on that thread).
If you are able to reproduce the problem then we could try and do some debugging by looking at the DSM decoder status on nsh.
Cheers, Tridge

Thanks Tridge. I’ll test with a Spektrum satellite tomorrow. But I just had a customer claim he had the same problem. Happened on the ground. He had to press the arm button to shut off his motor. He couldn’t find his log. His setup: