Ardupilot 4.1 (dev) on a 4" drone with Crossfire. I had been flying just fine for weeks.

Then, twice, shortly after take off, (in AltHold) the throttle shoots up, drone obviously gains a lot of height. First time it stabilised after a while but lost sight of it, and video out of range. Onboard recorded video showed it went up to 300m and evenentually crashed. Through GPS I was able to recover. The bin file is attached.

I thought the problem was prop wash influencing barometer, so shielded that with a bit of open cell foam, to no avail.

Today same thing happened. It gained even more height than previously, throttle showed as being at 100% on OSD, although stick was around hover (middle). This time couldn’t find it back.

Can anyone who is better with log files offer any suggestions as to what was wrong?

If that happens, you should definitely switch to stabilize! It’s the only mode that can save your from barometer, gps or compass issues!
I don’t have the opportunity to check the logs now, but I iwill do it as soon as possible!

Thanks for the replies.

It was in altitude hold from the start.

Yes, I’ll remember to switch to stabilise next time (with the next drone, unfortunately), although it shot up so quickly I lost sight of it, so not sure if I could have flown it back.

Did you set up failsafe? Does the drone have telemetry? That might help you find it! If you had rtl failsafe, then go to the point where it took off, maybe it there landed automatically after loosing signal. If it has telemetry try to go with your laptop or tablet with telemetry module and try to connect to it, maybe you will be able to get signal and see where it is on the map!

also normal rc transmitter might help, go to the direction it flew away with transmitter on, and if you get signal look at the rssi value to see where the signal is stronger then arm the drone and listen for the motor noises.

Yes, it had telemetry. With throttle at 100% battery drained quickly, got battery fail-safe. I went to last gps coordinates but didn’t find it. Could not re-establish signal, so maybe battery was out by then. (First time this happened I was able to find it in this way)

That’s not what the log shows. You switched to stabilize at the time the thing shot into the air - that would entirely explain it if your hover thrust is quite low.

Interesting, I went by the recording of the flight video osd, which showed althold, which was the position the switch was in.

Hover throttle is indeed quite low, but who would it then increase height rapidly when it goes to alt hold? It flew fine for weeks.

Just trying to understand this so it doesn’t happen on next drone.

Check your failsafe in your rc transmitter, it might be set to set the throttle to 2000 and channel 5 to 1000 or something like that, that made it switch to stabilize, then you lost control. That might explain why that didn’t happen before, if your cables to the receiver are faulty this might happen. You want the throttle to be set to something like 975 and don’t touch the other channels!

Thanks, yes I see what you mean in the log now. About 2min9 it switches briefly to stabilise and that’s when it shoots up. But both throttle in and out show as zero during the tone it is on stabilise?

can’t take a look at the logs, I’m just taking guesses! As I said, I will check the log in 5 hours and tell you for sure!

What Yaros said actually explains what has happened. Did you make rc failsafe check on the ground before you ever fly in the first place? Did you shut your RC and see what is happening? Your failsafe setup on the rc transmitter is not set properly imo. Double check this part. 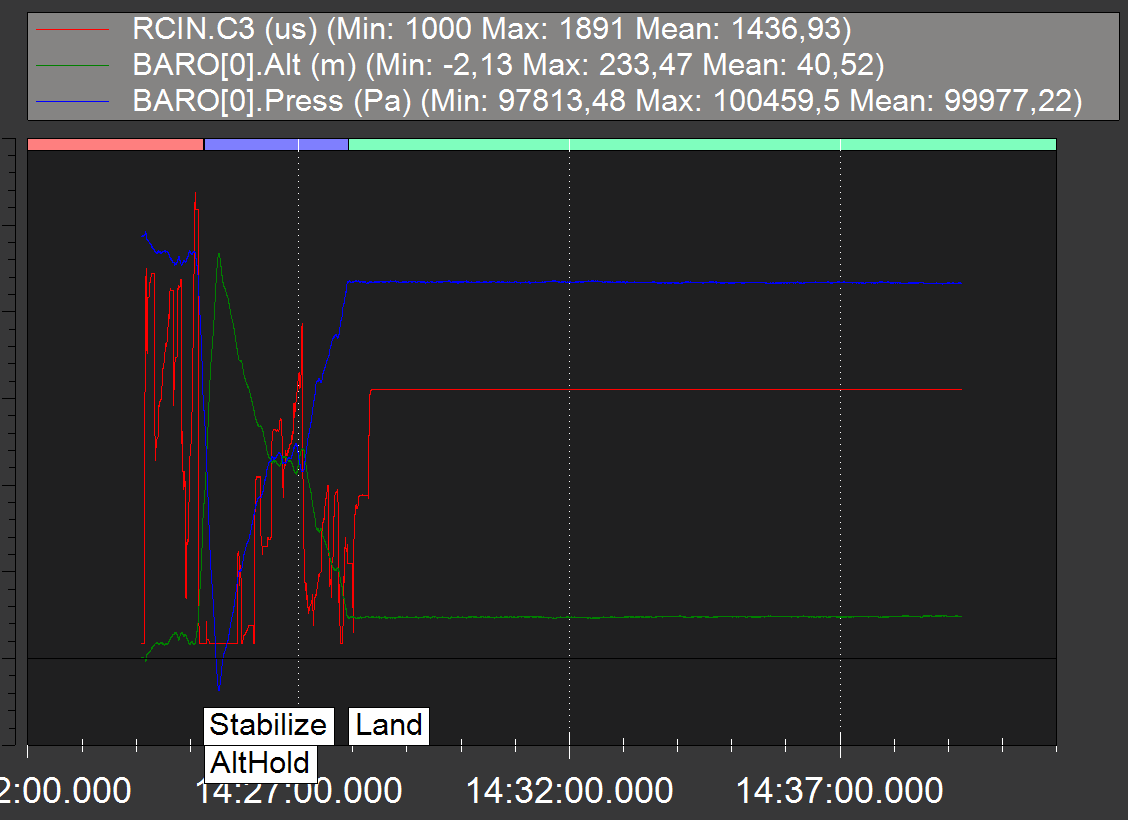 image1128×820 17.6 KB
The red line is your throttle channel received! I see that you pushed the stick down but didn’t switch to stabilize, only when the copter fell down to the ground you switched to land!

I don’t know if that’s relevant but this may be something similar, I strongly recommend using copter 4.0 not 4.1 that still isn’t in beta even!

I use 4.1 because I use crossfire, which isn’t supported in earlier versions.

I noticed that throttle-in and throttle-out don’t match (whereas in previous successful flights they do). What could cause that?

If you mean RCIN and RCOUT, they never do! Only if you’re close to the ground, because RCOUT is the output sent to the motors, it is different from received especially in modes like alt hold!

No, I mean ThI and ThO under CTUN.

I don’t know if that’s relevant

It’s not at all relevant. That is relative to S-curve navigation and a limited case at that. So, if you are flying with 4.1-dev AND you are flying an Auto Mission AND you have Rally Points configure, perhaps it would be of concern…

Scratch that, this was even a false positive.

In case of unexpected behavior my reaction is: go to stabilize if it doesn’t help I disarm to kill engines and drop quad on the ground. It is safer than allowing quad to fly away. It might kill someone or damage some property.
Repeat this procedure in your head every time before take off.