The Solo Lives On 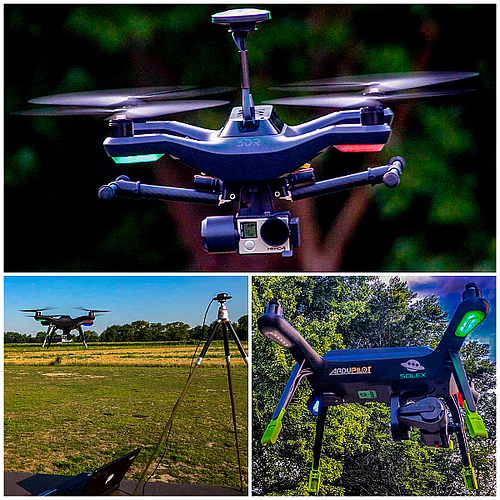 Countless hours of community effort has culminated this month with ArduCopter 3.5.0 being released as the first production copter version that is fully compatible with the 3DR Solo using a Pixhawk 2.1. The Solo can now progress along the leading edge of sUAS technology with ArduPilot!

The Beginning of the End that Wasn’t

When 3DR abandoned the consumer and DIY sUAS industry, many people put up RIP signs next to their Solo. There was no further development in sight and users resigned themselves to being stuck with “it is what is”. ArduCopter master was meanwhile making leaps and bounds with new enhancements that everyone wanted but nobody could have.

However, many users and developers were not ready to give up as quite as easily. If 3DR won’t keep the Solo alive, the rest of us will. Hardware developers, firmware developers, GCS developers, and beta testers all hit the ground running to make it happen. 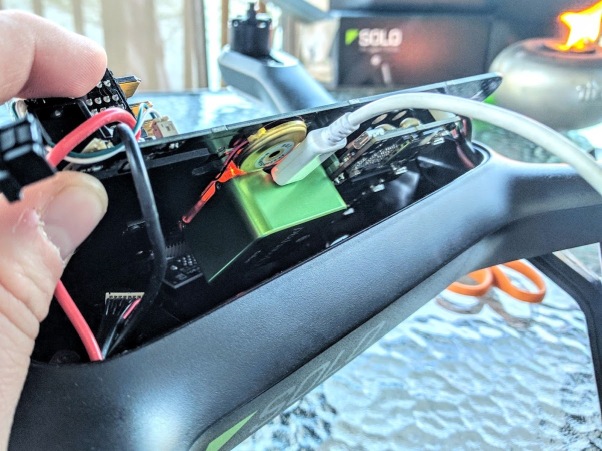 The already very busy dev team at ArduPilot along with several other so-inclined users helped create and merge patches to fix incompatibilities and add new features. As always, the Mission Planner GCS was updated rapidly, keeping pace with the firmware changes. The “Solo Remastered” project was a weekly topic on the ArduPilot developers conference call. They also had the patience to put up with me learning how GitHub works, making every newbie mistake possible submitting PRs. I am personally quite thankful for their help and I learned a lot from them. 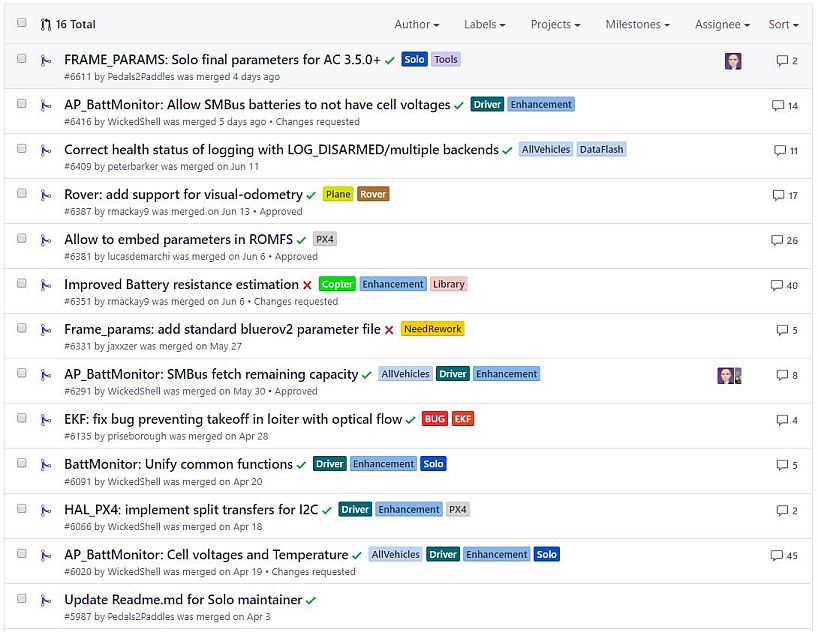 Kelly Schrock (@kellyschrock), the developer of the Solex GCS application for Android was on the ball pushing out new updates to work with ArduCopter master’s features and functions on the Solo. The Solex app has become the defacto standard GCS app for the Solo since 3DR abandoned their applications a year ago. Solex has continuously added new features and improved existing features since it’s launch. Solex has also made the upgrade to ArduCopter master as quick and painless as possible with a firmware upgrade function developed around the process. 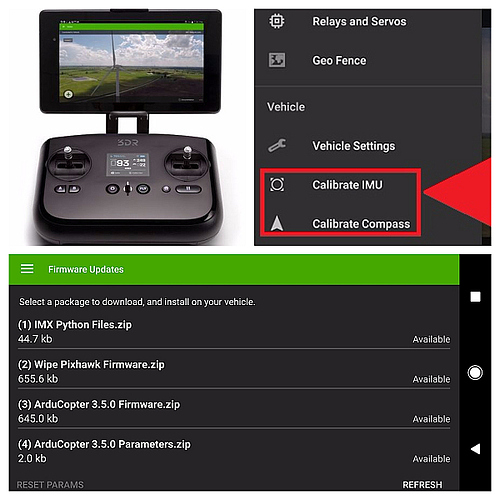 Numerous changes to the Solo’s smart shots and other python driven functions were required. Some were bugs to squash. Others were for compatibility with ArduCopter. For example, the “return to home” python driven mode was discontinued due to complications and compatibility issues. Anything that used to initiate that function now simply activates ArduCopter’s native RTL mode. This eliminated several points of failure.

The Bleeding Edge of Beta Testing

Many beta testers sacrificed their time and money towards this project. They purchased the Pixhawk 2.1 Green Cube knowing they were buying into an experiment at the time. They were eager to try out and stress test the changes and patches. Some quite literally sacrificed their copter for science, flushing out the bugs and incompatibilities. There were no instructions or procedures to start out with on day one. We were finding out what worked, sharing it with the group, improving it, and writing the instructions as we went. There are now Solos cruising the skies with RTK GPS, lidar altimeters, ADS-B avoidance, real time battery management, and terrain following missions. All of which was not possible a few months ago.

With the Pixhawk 2.1 and ArduCopter 3.5.0, the Solo is back and literally better than ever. It is no longer bound by heavily customized firmware or incompatible hardware. And it now has a robust and growing GCS application. As ArduCopter grows, the Solo grows with it and the possibilities are endless.

Of course the vast bulk of the credit goes to Matt, Kelly Shrock (Solex), Philip and many others who put in the effort to make this happen. Well done!

I’d also like to add a small plug for the ArduPilot license (GPLv3) that also contributed to this project’s success. Most licenses (even other open source licenses) allow the manufacturer to completely lock-down the platform and removes the end consumer’s right to control what firmware goes on the drone that they own. ArduPilot’s GPLv3 license helps protect the consumer’s right to modify and upgrade at least the flight controller software on the vehicle they own which leads to a more interesting, dynamic and engaged community while also allowing the product to live on and improve even if official support ends.

Great work! It’s a real shame that 3DR didn’t release everything when they abandoned it, but great to see the community pick the baton, work it all out and give the platform a future.

It’s funny how this has worked out. 3DR built a great consumer drone, but couldn’t make a successful business out of it. So they abandoned it, leaving it up to the community to keep things going. Which they did, in a big way. As a result, it seems there is no other consumer drone available with the life this one appears to have. Great job to everyone involved with this! I have 5 of these birds, so my grandkids will probably flying Solo too.

With all of the complaints currently swirling around DJI’s draconian geofencing system, it will be interesting to see if this leads to an actual competitor for commercial (e.g. Part 107 etc.) users.

The GoPro is unfortunately a limiting factor in the solo today. However this all opens the door to additional gimbal and camera combinations.

Yes – but it is a huge limiting factor that GoPro. And is anyone else really stepping up with another gimbal/camera? Cannot see it happening.

I really wonder if integrating with DJIs X3/X4 and/or even Phantom gimbals would not be a bad approach. Someone has already produced an adaptor for the X5/X3 (the guys that do UGCS). Since this will never be mainstream, maybe DJI will not kill such efforts. Unlikely though.

I think it will be a DIY effort for new gimbal options. You can put a conventional gimbal on the solo for any camera you want. Including the mavlink controlled Storm32.

True, but can you do Smart Shots with a conventional gimbal?

And just how well is Mavlink controlled Storm32 working these days? I got the impression that Olli was a little frustrated with Mavlink implementation. Is this actively being developed still?

The smart shots work. We have one user working with a Storm32 right now. Manual pitch works. But some shots the pitch goes backwards. Haven’t figured out why yet, but it is likely an easy fix once we find it.

That is great !! I’m delighted to hear this news. Well done on this hard work !

Does the recent move by 3DR to finally, and very belatedly, release all the Solo code mean that we will be able to make the Storm32 gimbal controller work with Solo and smart shots?

Will we be able to recreate a Solo-like platform on other hardware?

Hey Matt – can you point me in the direction of where the Solo using Storm32 is documented?

Is the gimbal pitch working properly in both manual and smart shots with the Storm32?

The problem is when you point the gimbal down with the Solo transmitter the lcd displays that it is looking straight down at 0 degrees, while the storm says it is looking down at 180 degrees. In my opinion, the Solo transmitter tilt angles are backwards. This can be further demonstrated by connecting to Mission Planner and sending ROI commands. Once this is fixed one could mount almost any camera to the solo with a storm and get smart shot functionality. I had been working on fixing this since last year, but have fallen short of time to do it since my little one arrived.

I’ll add that if using a storm with a Solo it works perfectly fine when controlling it manually, and provided a number of parameters are changed, up is up and down is down. Best results are when using a Storm32NT gimbal controller with dual imu to eliminate any yaw drift.

That’s what happened with @jubalr as well. Neither of us could figure out why it is doing that in the smart shots.

hey
I very much appreciate your efforts to marry the solo with the STorM32. I just want to tell that I would be happy to support this. Pl don’t hesitate to contact me if there is something the STorM32 should do differently/better in order get the smart shots working.
I wouldn’t be of direct help, though, as I don’t have a Solo (sadly the cheap offers are only in the US).
cheers, Olli

What would the limitations be with merging Storm32 NT with Ardupilot? CPU?