Today I decided to become a test pilot and/or crash test dummy, depending on how you look at it. Since I don’t have a DIY bird up and running to use with 3.5, I decided to see what I can do with my Solo! It is, not surprisingly, complicated. I will skip over the steps required to make it work, since I believe that’s worth a whole other topic. It was a LOT of parameter review, updating, and translating. It worked, it flies, the gimbal works, the smart shots work, and it’s pretty awesome.

This is a link to the dataflash log and parameter export in a zip file. I would love if some of the uber brains here could take a look and tell me what you think I still need to adjust or change. https://drive.google.com/file/d/0BwxNJyHTG9XJODlpOTgxMjM5cW8/view?usp=sharing

Here’s a quick crappy video of it working: https://www.youtube.com/watch?v=b6u2AxaJdCo

It needs a lot of tuning work still. Simply using the old Solo AC3.2 tuning values has left a lot to be desired. There are clearly a lot more parameters in 3.5 than there were in the solo version of 3.2. I copied and translated the ones I knew of an could figure out easily. But it still needs work. It has the shakes and drifts, all obvious tuning issues.

For the inquiring minds, things that do not work properly due to solo incompatibility (or improper configuration?) are as follows. All of which are pretty minor and don’t effect flight or safety. There are probably more, but I haven’t found them yet.

Time for a beer.

I did some more parameter work last night and this morning. Stephan Schindewolf sent me what the short lived Solo version of AC3.3 had for parameters which helped me compare and confirm some things. I did one flight with EKF3 and another with the old EKF1 to see if there was a performance difference. I found no noticeable difference, so I’m going to leave it on EKF3. It still has some shakes and jitters. All what appear to be PID tuning issues. But I would appreciate some log evaluation. Both logs and parameter files are in here: https://drive.google.com/file/d/0BwxNJyHTG9XJcHJwY29oSGNTN2M/view?usp=sharing

Just to clarify: Solo was forked around 3.3-rc5, so it has a version pre-3.3, but certainly not 3.2 (which didn’t have EKF). Also the short lived Solo version you mentioned was based on 3.4 development version that was way ahead of 3.3.

I see. It never occurred to me that 3.2 didn’t have EKF so it couldn’t have been.

then ph green cube 2.1 is made for what ? I thought that it was made because there was no possibility to upload newsest ac to solo…

There are a lot of rumors and assumptions about Arducopter master as it relates to the Solo’s pixhawk. And that leads to some rumors and assumptions about the Green Cube. The publicly available detailed information on matters of the Solo’s stock pixhawk are limited by non disclosure agreements that developers are bound by. There is only so much those guys are allowed to say without getting sued. It’s not because they enjoy living in a cloak of mystery. They love this stuff as much as we do, but they can’t run their mouths on it too much either. So that’s why there are so many variations of what can, will, and won’t work floating around the forums and internet.

There are lots of things you CAN do with the Solo’s stock Pixhawk that are not recommended or supported. Putting non-solo branch Arducopter master on a Solo’s stock Pixhawk is one of those things. There are a LOT of reasons why. I chose to spend a lot of time on what those issues are and how to safely be a test pilot.

3.5-RC2 (-v3.px4 version) is now installed on my experimental solo. Installation went fine. It maintained all the parameters I had set with RC1 before thankfully. I had some very funky AHRS issues. Sitting on a level table, it showed an 8 degree roll to the right. Level and accel calibrations failed repeatedly. Rebooted, same, failed. After that I used the reboot action in MP to reboot the pixhawk once more. It booted up level and normal. Passed all level and accel calibrations. Not sure what the deal was with that. But all appears to be well now.

It needs a compass calibration, but won’t be doing that until I get out to fly. Which probably won’t be until Saturday based on the weather. Snow, cold, and wind says me and dog are staying inside with pasta and beer until Saturday. Well, and going to work.

Thanks Pedals2Paddles for complete clarification. Now i see the complexity of the problem.

FYI, always make sure your above the tree tops when using auto tune. Or, put another way, I knew better and wasn’t paying attention like a moron. And if you think you’re above the tree tops, push it up another 30ft. Good thing I have a pile of spare parts and this wasn’t my primary Solo! This will only be a slight delay, and the weather might make it not even a factor. 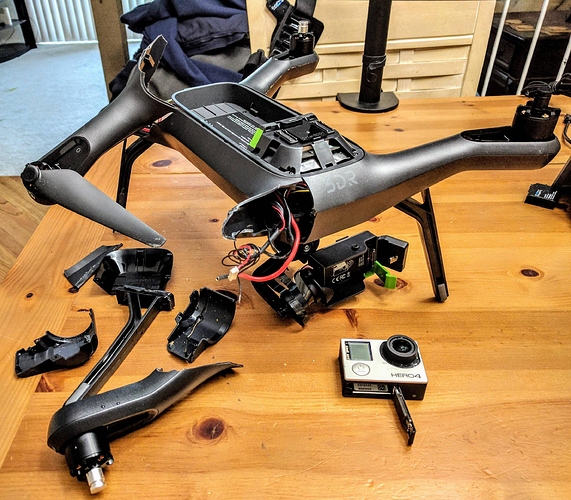 Pedals, that’s a real shame. Sorry! Hopefully this is just a hiccup in the quest to get Solo on master.

In my down time, I’m putting outboard CP antennas on the solo to replace the linear whisker antennas in the legs. Should help with link integrity and range, and really blow it away with an FPVLR on the controller.

Also putting in an externally accessible micro USB port plugged into the Pixhawk. That way I can hook up with Mission Planner directly without having to disassemble the whole bird. @mtbsteve is doing this as well. Should make loading beta firmware and resetting parameters much easier.

I was going to put my own ESCs in the arms too. But decided to hold off on that. I want to test and verify using the same ESCs everyone else has first.

Back from the pile of rubble! All beeps and blinks are beeping and beeping as they should. Video is videoing. Motors are spinning, and even going the proper direction!

While I had it taken apart, I put new external antennas on it. They’re circular polarized 2.4ghz antennas. One is LHCP, the other is RHCP. The two reject each other very nicely. That cuts down on desense, and improves MiMo isolation. The circular polarization isn’t affected by pitch/roll angle of the Solo. I expect they’ll work nicely even with the stock controller antennas despite the 3db cross polarization loss. Once I know it works, I’ll probably get an FPVLR for the controller, which has matching CP antennas. 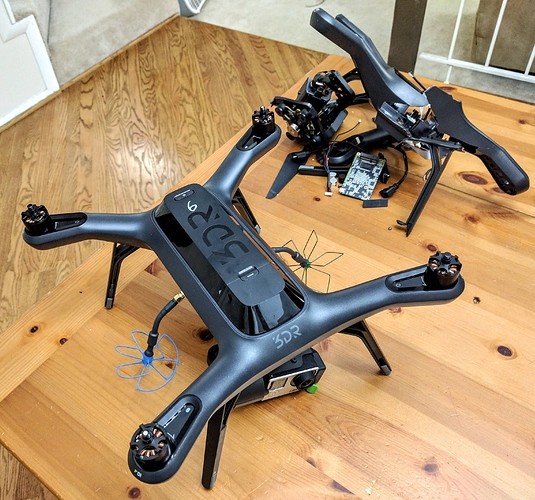 Great, i’m interested in how the antennas work out (amonst other things). APSync (which can be considered our open version of what’s in the solo’s iMX6) has video now but it’s not as good as the Solo’s yet partially due to software but also due to the antennas.

I will post a review of these antennas vs the stock whiskers vs normal rubber duck antennas once I’ve compared them all. I think based on how 802.11N WiFi using MiMo works, one of each LHCP and RHCP on both ends will be superior.

Great day of testing today with 3.5-RC3. I have a good set of PIDs that I think will be nailed down for good with one more test day. Almost all the other parameters have been worked out. Again one more day of testing should have that nailed down. I’m presently documenting a repeatable process for installing and configuring. Which I also think I’m very close to completing. Today I also used the terrain awareness and following features via ground station data. Very cool! Solo’s video stream in Mission Planner was a nice touch too. 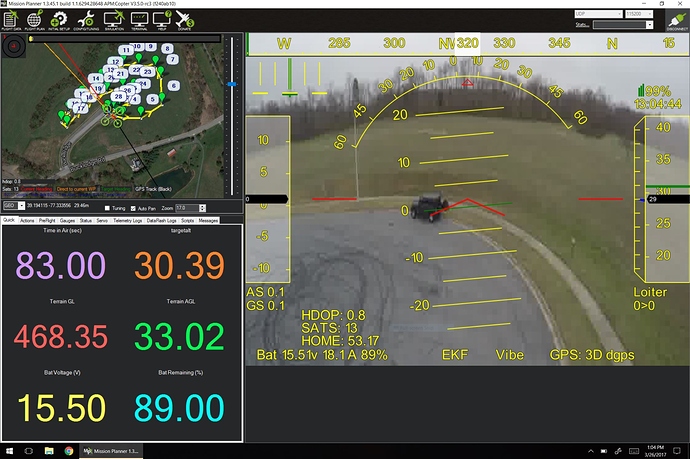 Pedals,
Looking good!
Nice to see the video there on the MP. I think Michael will let the video be pulled into a separate window from the HUD soon (if he hasn’t done it already). I’ve started flying a bit with APSync’s video but it’s not yet as good as the Solo’s… still it leads to more voices asking for this kind of thing from the GCSs.

Thanks! This was the first day I was able to really fly rather than bang my head troubleshooting. I was a happy camper.

The big headache source is EKF3. The Accel and Compass calibrations do not work if if I have EKF3 enabled. The PH goes radio silent, and subsequently the companion computer disconnects. The whole thing needs to be power cycled to get it back. With EKF3 disabled, it all works perfectly fine. So my current parameter set has EK3_ENABLE=0 and AHRS_EKF_TYPE=2 for now.

Yes, that makes sense. EKF3 is not enabled by default for AC3.5 so although we will look into that, it shouldn’t be a blocker for getting Solo on master or AC3.5. Worst case we can sort it out after AC3.5 goes out. I’ll report it on the dev call tomorrow in any case.

So what doesn’t work? I guess the ESC lights for sure. Anything else?

Let me add to this- with the great support of @Pedals2Paddles I put on RC3 as well yesterday.
Issues I noticed besides the green LEDs:

Thanks for having a look at it!

I remember seeing the bad logging message once when I had these wrong.