I could be wrong, but I was thinking yesterday that something like a pi would be overkill. Aren’t there commercially available serial to wifi adapters?

I guess you were suggesting that the pi zero could handle the mavlink to jeti conversion and the wireless relay to a laptop/tablet.

I do need to look into how Jeti handles having multiple “models” in the radio linked to a single receiver. I think I’ve done this in the past without any issues but I honestly can’t remember at the moment.

For RTK GPS operations, I actually think this wifi/RC/RTK gps base station could be an awesome setup but I need to look into the wiring and such for RTK a bit more.

Hey Andrew
It depends on what you need/want.
You’re right that you could use a ESP8266 or even better a ESP32 as a serial to wifi bridge, however if you add a raw capable M8T or a modded M8N GPS and RTKLIB on the pi you should be able to get RTK working as well. One of the main reasons we use the pi is to run mavproxy, which gives us the ability to reroute telemetry over RFD900x, wifi and 3G/4G mobile (USB dongle) and even back to a Taranis screen, however we want. Also imaging etc can be recieved via the 4G modem and multiple GCSs can be used, like tablet or PC. Another thing you can then do is to run a I2C oled to monitor link status directly and integrate a few buttons as a failsafe, for example one for RTL, land, and play/pause etc. Or run Ardutracker for a directional antenna. It opens up a fair few options that need to be only installed on linux on a pi, but would need to be ported to ESP32 etc.

Thinking a NanoPi Neo Air or Neo2 ought to do nicely as it has a faster CPU and a few other upgrades over a regular PiZero.

I need to study this MavProxy…

RTKLIB sounds interesting but I think I’m probably going to start putting Here+ on our aircraft and I honestly don’t know if it is even possible to make all this work with a Here+ base unit.

Andrew
You can use Reach, Here+ or get some M8P’s from Drotek instead of RTKLIB.

If space and battery consumption is not a concern on the ground I’d get a Odroid C2 or XU4 as they are typically better supported than some of the banana/orange/Friendly-Arm ones, and have better performance (XU4 has USB3 etc). (Armbian comp. helps)

I actually setup a Raspberry PI Zero W with the RFD900x connected to it on it’s UART. Load when running mavproxy is around 0.6 while the thing is also doing DNSMASQ and Hostapd.

So, as for cheap options go - it works.

I didn’t do a test flight or so. Waiting for a power supply. I like this setup and it could be a very small package in the end, so easy to mount on a pole.

Seems to me that if you had companion computer on the bot then you could have multiple control data streams on one channel of the rfd900 series radios. Using ppp encapsulated slip packets across one of the channels. Like when you used to connect to the internet with a phone modem. The RFD900x just provides the serial link doesn’t matter what you run over it. DSM control packets are really small so plenty of room left for other things. PPM is not difficult to generate.

Yea they are useful. With pigpio and piscope its easy to set up control signals to go over the RFD900 link. Develop on a pi III and just move the sd card over to the Zero. Haven’t tried gstreamer yet for video. Pity the model with the csi camera interface doesn’t have wifi or bluetooth.

Model with the csi camera interface does not have WiFi?
My pi zero w had a raspicam v2 connected to it!
I can’t try gstreamer soon, but willing to try. Motion software was a bit too heavy for the cpu on the zero

Allegedly RFD is coming out with a JR module bay insert containing something like a PiZero-w and a 900x. Seems to me almost like the perfect solution for use with something like a FrSky Q-X7.

It probably won’t make injecting RTK correction data any easier but I like that the radio link to the aircraft is actually powered by the r/c radio.

Hello, I need some help to understand how to make this PPM passthrough work. 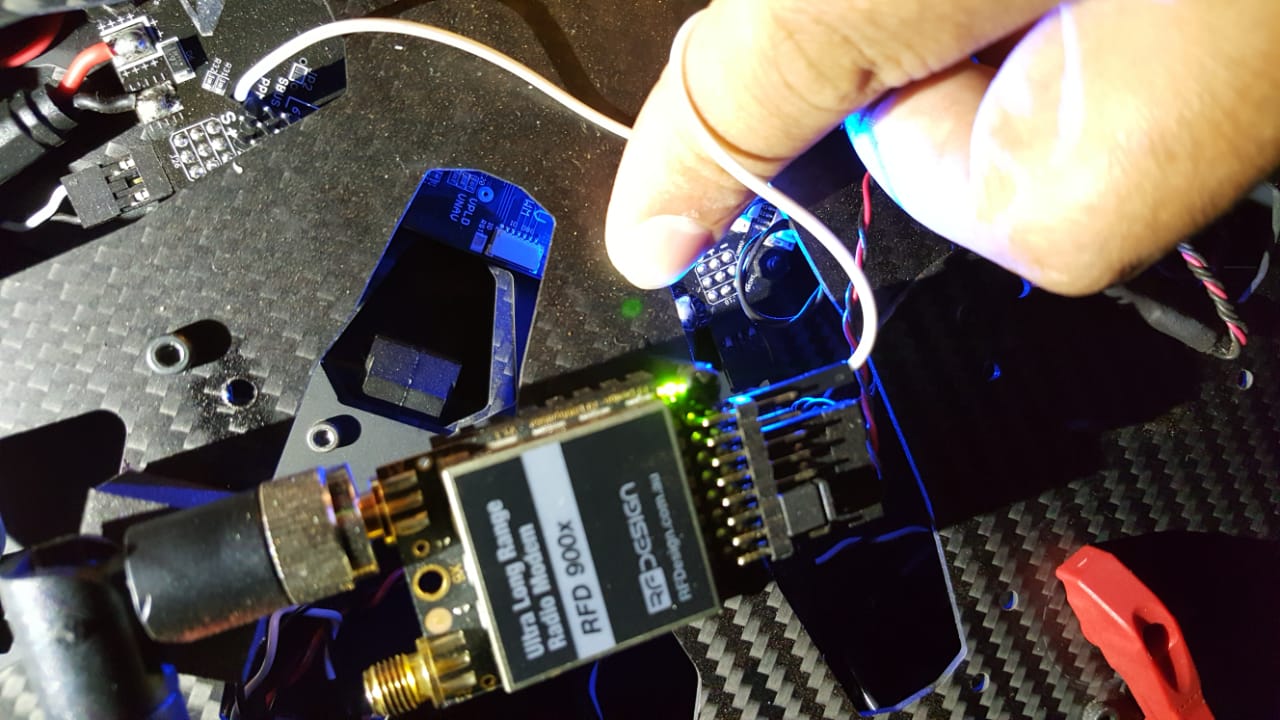 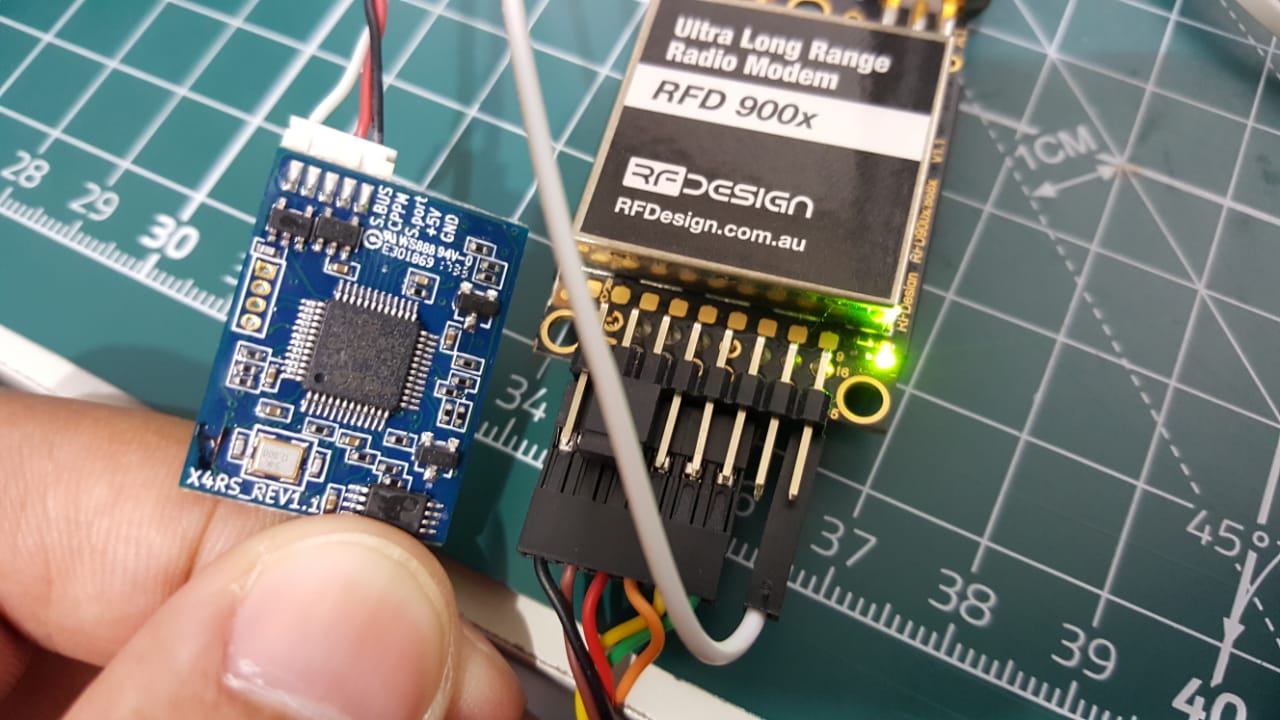 Is your intention to use S.Bus or PPM?

For PPM I believe you would use the CPPM pin of the X4RS - S.Bus may work, but I’ve not seen anyone try it.

This post had the most discussion of PPM on 900x. I had a similar question in the same vein.

Right now, I have my modem set up this: 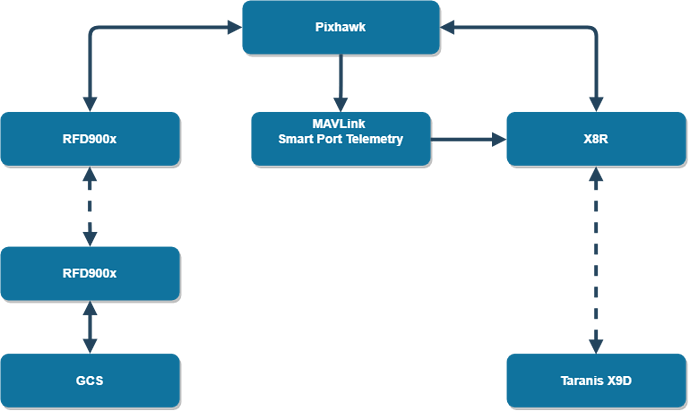 Would it be possible to instead set it up like: 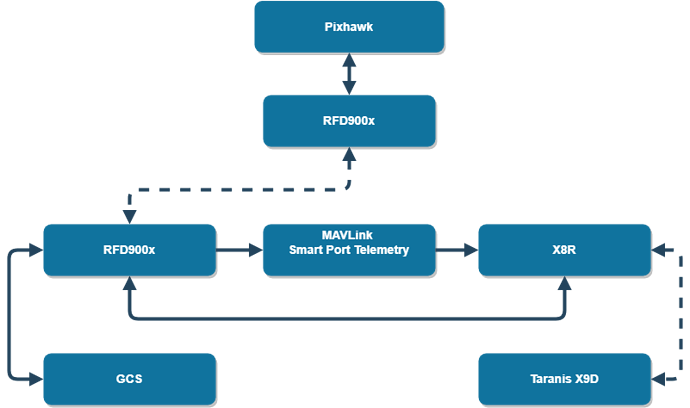 And get telemetry scripts running on the taranis?

Revival: @thatsnailguy did you ever figure this last question out? I’d be interested in a similar setup

Yes, I did! Sorry to not report my setup. Unfortunately I am on vacation until next week, will update with my specifics then.

I anxiously await your reply!

Check it out at this post. To get it working I needed to use OPs teensy code.

I’m going to revive this with a question on the same topic. Currently using rfd900x to pass telemetry only and frsky rx8r for RC. I’d like to get some redundancy and range with the RC by piping PPM through the rfd900x.

Heres the idea: continue to use frsky rx8r onboard the aircraft with the Rc bound to it. But also bind to an xsr at the groundstation and output its cppm over the rfd900x (as seen on @samucs post). On the airplane, pull off the cppm and convert it back to sbus and feed it into the redundancy port on the rx8r (with something like this).

any chance this will work? are there issues here with 3.3v vs 5v logic levels (and how do you solve that?)

Anyone know if the ppm will pass directly to the computer giving the ppm choices plus the 14 telemetry choices together 16+14 +30. It would be nice to have that. Otherwise I see no use for it. I use a throttle and joystick from a laptop…