That one looks pretty solid. I made a replica but now thinking maybe I should modify and have 3 points of contact.

My Iris arrives tomorrow. I printed this mount from Thingiverse: 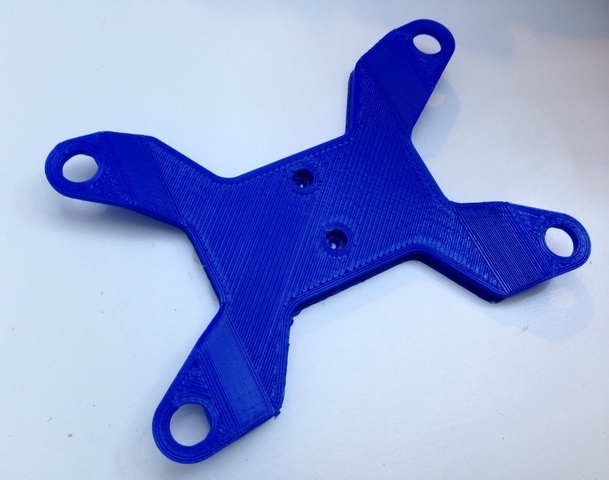 You may want to print from Nylon. I made some really strong stuff that survived my test of running it over with my car.

Printing the part right now. Bind it with acetone and you will see that it is 2 times as strong.

What do you mean “bind it with acetone”?

Soak the part in Acetone for 1 min and it melts the ABS lines together. It makes the part stronger.

You can’t soak it. That will destroy it. You can brush it with acetone.

It will flood the infill and never come out. A brush is a good way. But it doesn’t hurt to try it both ways.

[quote=“wbal57”]For my Tarot frame a slow steady decent in RTL mode cracked my plate right down the center. Seems weakest and broke clean in half.

IPS Weldon 16 works well with all the plastic on IRIS sofar. It works and will melt the layers it touches and almost weld the surfaces together. IPS 16 takes time to cure and needs to be clamped but has repaired my frame and two legs. Great stuff.[/quote]

So, you have used this on the legs and they repair strong enough to feel comfortable flying it again? It is getting expensive replacing arms for me

I had a bad crash and broke 1 arm, but on two other arms, since it crashed upside down, it just popped the bottoms out where the motor attaches. If this glue works well and creates a nice strong bond, I may just try to glue the bottoms in again. I’ll still have to get new motors, but might save on the cost of new arms. Would you feel comfortable flying with repaired arms? You said you repaired legs…did you mean arms perchance?

I printed the replica in ABS in a heated chamber FDM printer then dipped it in solvent to bond everything together. It feels quite strong maybe not quite as strong as the original but very close, its a little more flexible. After a few flights it seems fine.

That one looks pretty solid. I made a replica but now thinking maybe I should modify and have 3 points of contact.

I am new here, I have had my IRIS+ for a couple of months and broke this mounting plate. Would you be willing to share your CAD design with me? I want to sent it to 3dsystems.com/quickparts/pro … inting-dmp

and get an estimate on printing it in metal. Don’t know about how much weight it will add. If they can do it though it would be a permenant solution. Don’t see metal breaking.
Or would that just transfer the weakest point to the mounting points on the body and destroy the craft instead of plate in a crash.?

Anyway I am willing to try it if you will share your design. Thanks very much.

I would stick away from the metal. I can print you the part if you want. You will just need longer bolts and pay for the shipping.