Finished a Tarot 680 Pro build about a month ago and have lately noticed the motors getting very warm.

Currently I am running Tarot 4006 - 640kv motors with 1355 CF props and Spider 30A opto ESCs. I have had a flight easily reach 18-19 minutes with time to spare before reaching 80%. However I ran a flight right after and had some hiccups. My initial thoughts are motor overheat. Luckily the copter recovered on it’s own and I landed. I am flying with the Multistar 4S 10C 16000 which is heavy, so my copter weighs approximately 3.9kg with gimbal, etc…

The motors are running pretty warm after about 10 minutes of flying. Throttle hover is right at 50% throttle according to the Pixhawk logs and it is consistent with every flight.

I ran ecalc with Multistar Elite 4006 -740kV, but it warned me they would be hot also with this setup and weight. Any advice is welcome.

First suspect would be the ESCs desyncing from the motors. Lower-kv motors like yours are notorious for having sync issues - are they blheli? First check is to make sure you’re not using any kind of active braking.

I just recently flashed them to blheli. I switched the PWM frequency from damped light to high which I believe turns off active braking, correct?

I haven’t tried changing the motor timing. Everything else is default.

Should I try changing the motor timing or PWM frequency to low?

Is there a way to tell if there is a syncing problem from the logs?

Thanks for the help!

Yes correct, damped light = active braking. You can see a desync by looking at rcout, a desync usually shows up as mid flight as a sudden and sustained 100% output on a motor channel as it tries to compensate for the lack of thrust.

I can’t help much on blheli settings, it’s always been a complete mystery to me!!

640 is not really that low of a KV to worry about ESC/motor sync issues.

I will say this. I stopped using BlHeli and/or SimonK in favor of using Hobbywing X-Rotor with ZERO problems since. And I use really low KV motors (320 Tarots). Runs great.

Switched PWM Frequency to low and it was very unstable. Switched back to high.

Pay the $5 for Ecalc full version, it’s worth it.

I have very similar set up to you with frame and battery and rotors. my motors are HW 580’s and do not get warm. I will vouch for X-rotor esc, they just work, don’t fry (even during props stuck in the ground), and don’t need to stuff around with programming. 30min flight time with gopro/gimbal.

Possibly the prop size and pitch is at the limits of your motors. are you assuming the heat is to do with failure? have you gone through logs?

According to ecalc, the setup I have should be fine: 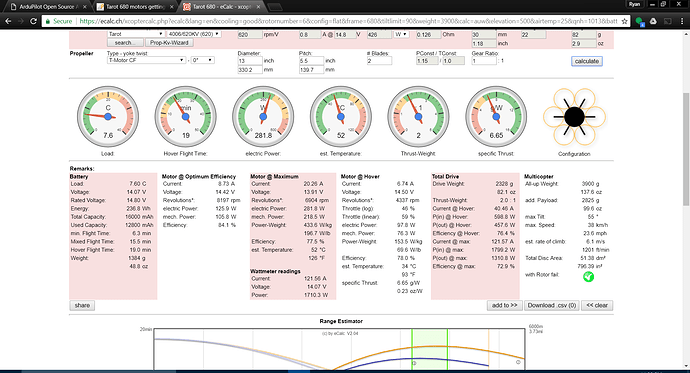 I guess I shouldn’t worry about it and just fly it. Maybe these motors are just more inefficient than others. I tried selecting different motors in ecalc, but none lined up much better. Higher kV tended to run hotter and lower kV seemed to need more throttle to maintain hover.

Not saying that’s definitely the problem, but it’s the first place to look.

All motors are going to get warm in use without fail.I use one of those cheap infra red thermometers to check mine out if I think thery’re getting hot but usually it’s a case of grabbing hold of them immediately after landing.If you can keep hold of them then they are not hot,merely warm.If you take your hand away and shake it to cool it down then you’ve got a heat problem.

My 680 Pro with Multistar Elites 4225/610kv motors and everything else just about the same as yours does not give any cause for concern,Warm but not hot.I don’t have a temperature to give you as I use the gun for consistency testing mostly and fingers for finding faults.

I just never understood the attraction for active braking on rigs that aren’t racers. Maybe it’s just me, but when I was using those BLHelis, they were nothing but problematic for me. And this is coming from a guy whose first round of ESCs on a big rig were Castle Multis (never use those again; you pay for the name not for quality).

I really appreciate all the help and comments. This has been a great learning experience for me.

@Jagger, I really believe that I am probably overstating them being hot. By your definition they are probably just warm as I can wrap my hand around them and not be forced to pull away. I will be picking up a non-contact thermometer tomorrow just to verify temperatures are in the green, but after everyone’s comments and the ecalc calculations, it is probably good.

@fnoop, I did go back and look at my logs for the flight in question. I really believe it was a desync issue now after you described what it would look like in the log.

It was only for about 1/2 a second, but it really caused the adrenaline to start moving.
Since then, I have upgraded the firmware in the ESCs and flown over an hour or more of actual flight time without issue.

I spent a couple of hours last night running different motor and prop combinations in ecalc, but really could not come up with anything substantially better than what I have currently. I really appreciate all the advice and assistance.

You’re good to go if you can handle the motors.

I’m another big fan of Hobbywing X-Rotor ESCs by the way.Pro’s and standard -they all perform like champs.

Ah yes that looks familiar, same kind of trace I had right before my quad nosedived into a tree. Good luck!

Yes, luckily it’s a hex, so the other motors compensated quickly. I am heavily giving the X-Rotors some consideration and may look at replacing in the future. Just not crazy about pulling everything apart to do it.

Not sure if I should start a new thread or not, but for you guys that responded that have a similar setup to mine, may I ask what your PIDs are for pitch, roll, and yaw? Pitch and roll on mine after autotune seem a little higher than normal, but okay. But yaw seems really high. Thanks in advance.