fhedberg recommended his code for dual rotor helis at https://github.com/ArduPilot/ardupilot/pull/1860
few months ago and I haven’t heard from him since.

I have desired servo mixing now but having problem with servo trim and range.
Heli setup page is greyed out so I am using full parameters page.
H_SVn_TRIM and Min Max don’t work and I’m not very good at coding to fix it.

No one?
I’m completely lost with PID.
Not sure at all whether Trad Heli tuning guide will apply to this.

Just wish me a good luck then…

However I would suggest that although your hardware looks great, that the best way to work on this would be to use the simulator.

Got P to 0.12 when it starts shaking slightly.

Bump
Can someone give me some advice for reducing vibration?

In some harsh vibrational environments its often only feasible to look at isolating the FC from the frame vibration but without decoupling it too much.
There are a number of options available.
Although they have touted the PH2 as having internal vibration isolation I think you will probably need to look at setting up your own.
The PH1 was supposed to have vibration isolation but I have found it insufficient for most applications.

Once you get the vibrations down you should have better luck with the PIDs.

Also did you solve the servo rale queary?

I will take a look at your logs as soon as I get a chance.

About servo rail powering, people are saying differently. Most are saying always use separate rail or deal with pixhawk brown out.
But from what I read, PH2.1 prioritize power module before servo rail for powering the system. So while I’m using power module, servo rail can be anywhere below 10V according to spec.

Not sure about Pixhawk 2.1, but we have a large helicopter with high-voltage servos and receivers connected to the servo rail on Pixhawk (actually, we are using Pixhack, a good quality clone) powered by a high-voltage BEC. No problems so far.

The only issue is that Pixhawk won’t be powered from the servo rail if the input voltage is above 5.7V, so the servo rail will not be used as backup power source and the power module is the only thing powering that system. We could potentially add redundancy by also powering it via USB too, but we haven’t got around to it.

BTW Is my BEC doing ok?

here is another log.
Changed blades to ALIGN 380mm, blades tracking and balance is fine.
Hovering nicely this time.
But vibration is still not nice to look at.

Do I really need jello isolation?

I’m not expert enough to tell if there is something to do with rotors interfering. 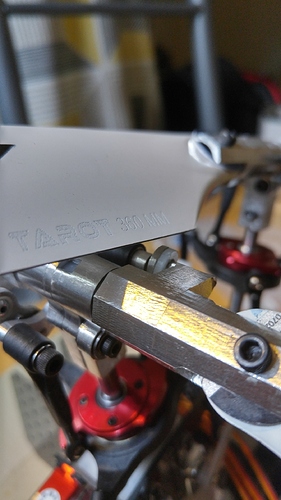 Looking at your log, it appears that you are not logging the IMU at the fast rate. My first suggestion is to change our LOG_BITMASK to one that includes fast IMU. Based on the data you provided, the frequency of the vibration that I could see was approximately 660 RPM. What is your head speed? What is the distance from the rotor shaft to the blade grip bolt? I can use this data to look at the blade lead-lag frequency. Trying to rule out causes, how tight are your blade grips? You want them tight enough to give some resistance but not overly tight that the blade is hard to move in the grip. A big concern that I would have with this type of configuration is structural based vibrations due to two rotating systems. If it was this type of vibration, it would be really bad at one rotor speed and then subside as you get above it, if you can get above it without a structural failure.
Neat project! 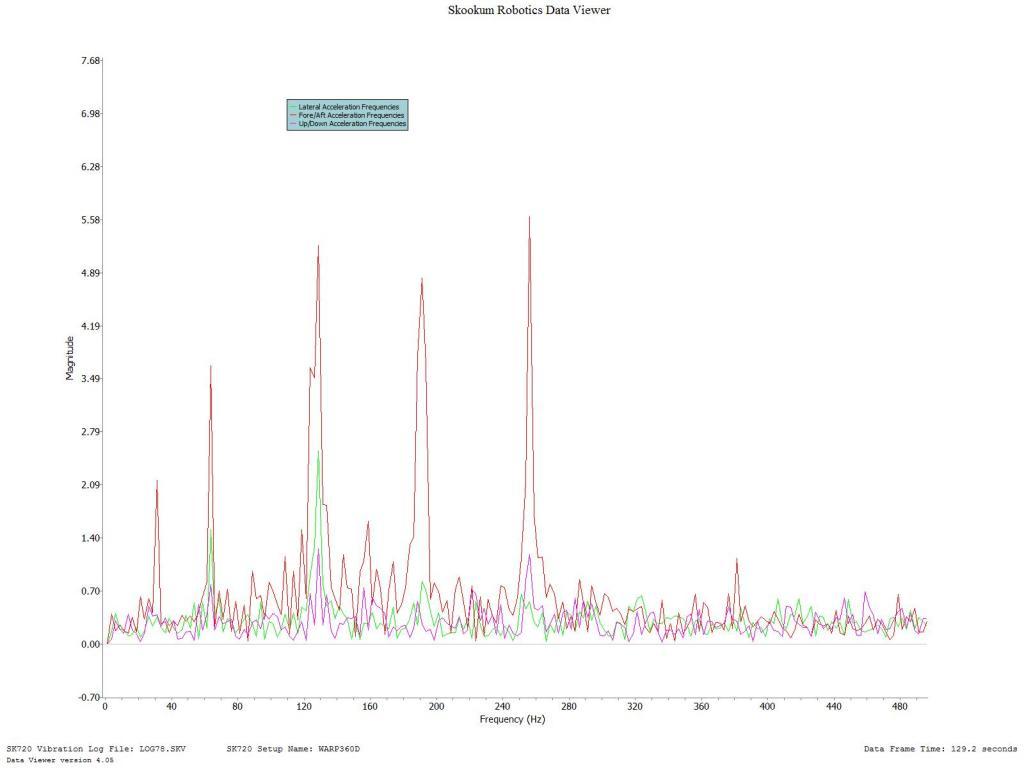 If it helps, I can send you CAD model (SolidWorks).
Don’t want to post them to public.

Thank you for all the help

Thanks for the plot from your skookum log. Your configuration (intermeshing) is different from what I typically look at. My analysis could be seeing aliasing since the Pixhawk log data is only 25 hz. Based on your skookum data that is shown in your plot, my guess would be that the very high frequency peak is some sort of drive train vibrations. because you have two rotors, the vibration analysis gets more complicated. Since the magnitude is so high at the highest frequency, I would start with the drive train. The drive train appears pretty simple but gear mesh issues could introduce vibrations. I assume that the main gears have some bevel to them so that the teeth evenly mesh. It was tough to see in the pictures. If not, I would fix that for two reasons: vibration and potential for failure (not engaging the whole tooth face for pressure). Hope that helps.
Bill

Thank you for your insight.

However, I see it differently.
It is hard to notice without openning Skookum data viewer but those spikes frequency are all divisible by 2250. The highest spike being at 2250x8 = 18,000rpm.
3rd, 5th, 7th (odd numbers) spikes are not visible.

I’m not very sure I understand. Sounds too technical LOL.
I will try to summarize, please correct me.

Lift, drag ,etc on blades will vibrate the heli up and down.

In the horizontal plane, rotor vibrations would come through in the non-rotating frame at 1 plus and 1 minus the rotor rotational frequency times the number of blades.

Sideways vibration usually comes at (blade# ± 1) * RPM
Which in my case, the +1 part doesn’t show up.

And from Skookum log, Up,Down vibration (pink line) has no spike at all.
Pixhawk2.1 Z.acc log still looks ugly…

If the vibration magnitude seems to peak at some head speed and subside at other head speeds then the it could be the rotor coupling with the airframe structure.

Lift, drag ,etc on blades will vibrate the heli up and down.

Yes. These also cause the lateral and fore/aft vibrations in the non-rotating plane which come through at (# of Blades +/- 1)*RPM.

Yes, that appears to be the case

And from Skookum log, Up,Down vibration (pink line) has no spike at all.
Pixhawk2.1 Z.acc log still looks ugly…

That is interesting. I looked at all three axes and they all showed the same peak around 660 RPM. The other thing that makes this more difficult to pinpoint is that you have to rotors and their vibrations could add and subtract to make new frequencies.

Yes that would be the rotor or drivetrain resonating with the structure. This is the stuff that should scare you. I had a drivetrain that I built for an RC V-22. During my first run up I had a pretty bad vibration where the rotor was coupling with the tube that connected the two nacelles together. I had to go back and use a bigger tube to be able to get through that vibration to a speed where the vibration went away.

I’ve been using LOG_BITMASK = 397310 which gives me IMU data at 50 hz. There is 655358 which gives raw IMU but I’m not sure what rate that is. Remember that the placement of the Pixhawk can affect the vibrations it sees because of the aircraft structure. Also the Skookum is great but at the end of the day, the vibrations seen by the Pixhawk are what counts.
Good Luck!