I’m currently using a Kakute F7 1.5V with the MPU6000 softmounted IMU. I have my unarmed quad will gradually accumulate roll and pitch whilst sat on the bench, over a few minutes it will usually have an increase in around 5degrees in roll. This seems to be correlated to temperature (see mission control graph) but even after it’s been sat on the bench for 20 minutes it will still gradually gain roll. I have also observed this in flight as it usually fails to return to a level stabilised flight after a short flight in acro. 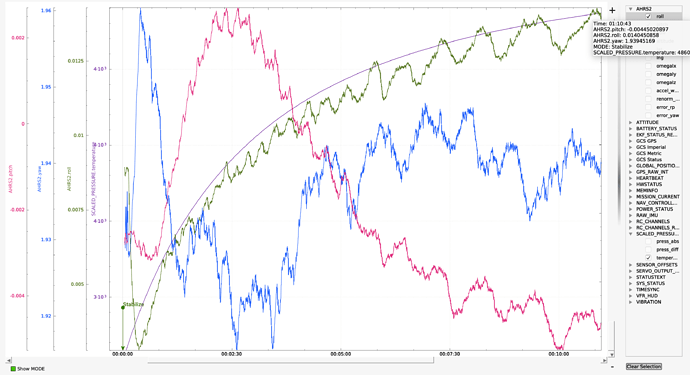 Is this normal behaviour for this IMU or should I be sending it back to Holybro? Is there anything I can do in the settings to minimise this?

We see this a lot with the Kakute F7 Mini which uses a 20689. It’s the accels that are the problem. I agree it’s correlated with temperature, but may also be related to voltage.

All I can say is I’ve been having the same problem for years, and have not solved it yet.

Some FC’s are better than others. I mean w/in the same brand FC… Like, I first had the issue w/ Omnibus nano’s. I’ve gone through a bunch of them. Some were so bad it’s unusable… leans to the point I can’t compensate. Others are manageable. So, that sort of points to a hardware issue. But they all do it. I tried sending a Kakute w/ the issue back to Holybro… Sent them images of the graphs and ever increasing bias, and compared it to another one that wasn’t as bad. They said they would not help because ardupilot is not supported. Betaflight does run fine on the same boards…

Also, I spent a day doing temperature related tested, and I was able to calibrate at the same temp I fly, and the bias did not grow during the flight… (Basically I took a flight, and as soon as I landed I calibrated the accels). Then the next flight, the logs looked great. But it still leaned. So I’m not convinced the bias you’re looking at is what is causing the leaning issue.

Please post about any progress you make in figuring out the issue.

Thanks a lot for the info. It turns out that PX4 has the ability to compensate for temperature dependant gyro and accel bias (https://docs.px4.io/v1.9.0/en/advanced_config/sensor_thermal_calibration.html). I’m going to try this out on the Kakute and see if this fixes my issue of ‘the leans’. I’ll let you know how it goes.

I think that may be a good solution. If it works we can incorporate the code.

Did you have a chance to try PX4 with the IMU temperature compensation?

It’s currently on my todo list but has been sidelined by the unexpected good weather. I’ll try and get on in this week.