some questions out to the experts about the planning of simple mapping missions (no cross-grid) for planes:

a) What are your experiences for planning with or without overshoot/lead-in (what values do you use)?

There was a thread by Tom Pittenger (https://github.com/ArduPilot/MissionPlanner/issues/1449) which does not need overshoot and lead-in but doing nice straight grid lines anyway.

b) what happens if the grid lines are closer to each other than WP_RADIUS? Is the neighbour WP considered to be finished then?

c) Will spline waypoints be better for planes?

d) Do you in any way specify the direction of the turns followed after the waypoint?

Background:
When i did a grid mission yesterday with especially no lead-in and no overshot i experienced some funny things (flying at 15m/s in 80m AGL). The waypoints seem to be “hit” (radius 20m) and next WP was aimed for. Hit again and so on and on… But the waypoint next to the one just hit was left out and so there was no nice line-pattern, but the one you see attached.

It’s just the AUTO part of the flight, then i got a little worried and went into FBW.

Thanks a lot
Alex 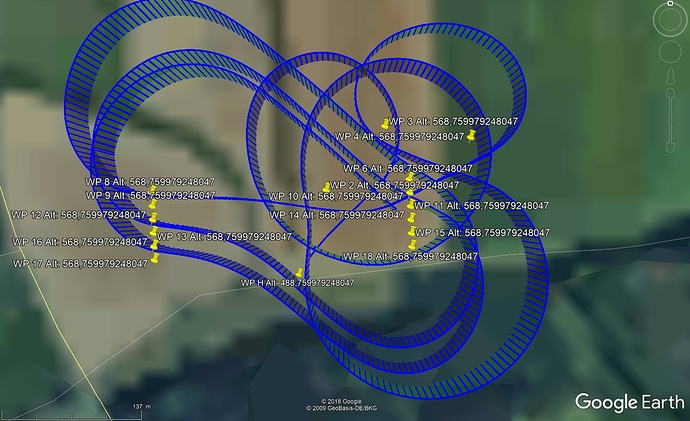