I’ve been testing and tuning a new quad. I was testing it in windy conditions the other day, a 15-20mph wind with 25mph gusts. I wanted to see how it would handle the wind. It was in Loiter most of the time, maybe 10 feet in front of me and 10-15 feet up. It kept it pointing mostly into the wind but I tried some different yaw positions to see how it reacted.

It seemed like it was doing well (subjective because I don’t really know how stable it should be!). At one point, it did a sudden and drastic pitch/roll where I thought it was going to flip and crash! But, less than a second later, it recovered and continued as before.

My question is, what happened? Was it a sudden gust of wind? If so, I didn’t feel it and I was standing right there in the middle of a park with the ship 10 feet away from me. There were some pretty strong gusts during the test but the ship seemed to handle them fine. What else could have happened?

The entire test was 30 minutes. I made a note the drastic pitch/roll happened just after 21 minutes. Sure enough, it shows in the log: 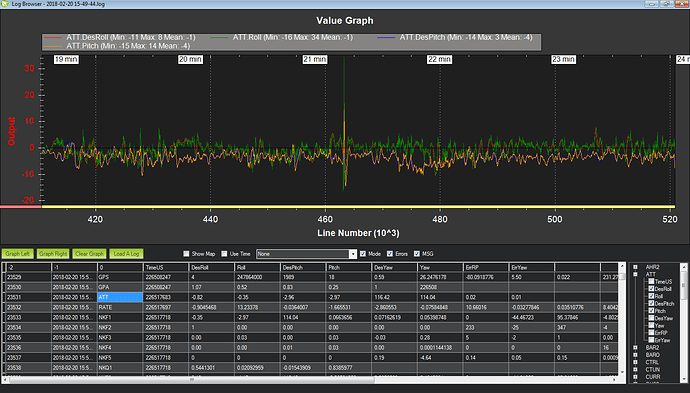 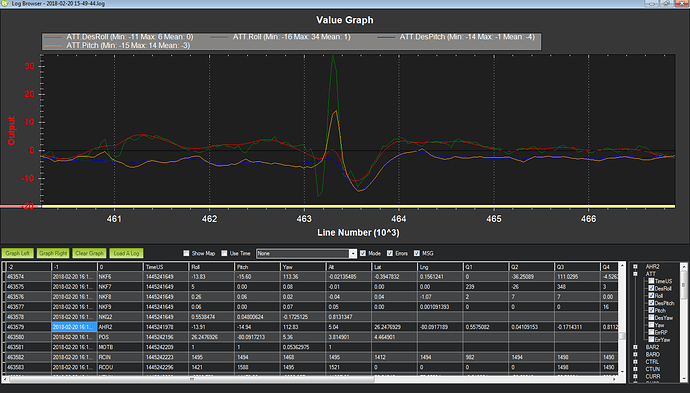 I’d really like to know what to look for, what I can check, and so on. Also, I think anything learned here may help others. I will include a link to the log.

Running your log through auto analysis does not provide any clues except maybe a quite big unbalance in your motors’output. That seems coherent with what is observed between lines 463 and 464 where you have a total discrepancy between desired roll and pitch versus the actual roll and pitch. This is usually an indication of a hardware issue related to motors, ESC or physical attachment of the motors. Could it be you had a motor or an ESC temporary glitching and/or one motor mount attachment getting loose ?

I saw there was an unbalance between the front and rear motors but that was probably because I didn’t position the battery correctly. I can move the battery back and forth a bit on the frame to compensate for different camera/gimbal combinations on the front. For this test, I only had counterweights in front, in case I crashed.

How do you test for ESC glitching?

I also looked at RCOU but I didn’t see anything noteworthy when compared to the rest of the log: 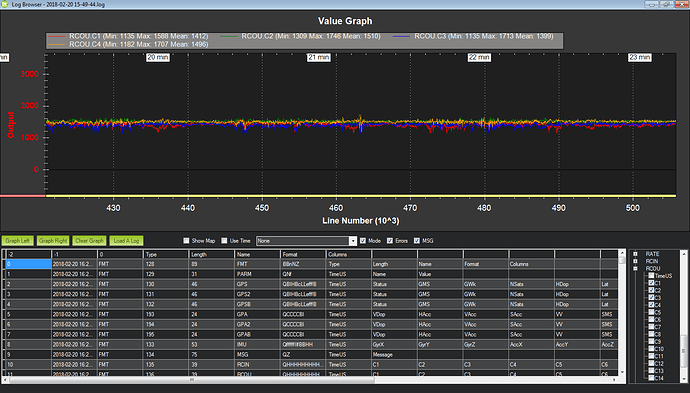 Last question… what would it look like if one motor had an issue with a bearing for a second, but it didn’t cause a total failure? Could that happen or is that not likely?

You obviously had something happening that was short, temporary and disappeared. Maybe a bearing as you say, but unlikely. Could it be something else that that bumped into Pixhawk very shortly (messing the attitude by the impact on the IMUs) ? (like a dangling wire maybe or your Pixhawk mount that got loose for a brief moment?)

ESC desynchronisation for a short moment is also a possibility, and then the ESC synced quickly back to normal. What firmware/ESC do you use? I assume you use the 380KV 3508 motors ?

Question:
You mentioned the front and rear motors being unbalanced in the log analysis. I had already noticed that in the logs and I thought maybe I just didn’t position the battery properly, BUT I had another thought…

If there is a constant 25mph wind and the ship is facing into the wind, in LOITER mode, and you are hovering for a long time, wouldn’t this create an artificial imbalance in the logs due to the flight controller keeping the ship tilted in order to fight the wind??

Yes that could be an explanation. But really what is more worrisome than your motor imbalance is the log showing discrepancy between desired roll and actual roll (and same for pitch) : that is clearly the manifestation of what you observed when the ship alsmot flipped over and it is normally related to the motor not able to apply the autopilot desired roll & pitch corrections to maintain the desired attitude. What is weird in your log and observation is that it was so quick and short with everything ok before and after for long minutes. It is like you had a temporary and brief motor seizure or power loss or ESC hickup or something of that sort.

Have you flown the ship since then to try reproduce this problem ? There is nothing worse to diagnose than an erratic problem that can’t be reproduced.
Let’s summarize what we know:
-The log shows what you observed (you have during a brief moment a huge discrepancy between desired roll & actual roll and same in pitch)
-It happened for a very short time with no signs before and I understand also no signs after of the same problem
-You do not seem to have a mechanical issue with mounts or motors, except maybe the low probability of a motor bearing shortly seizing
-the issue does not come from the autopilot since the PWM outputs and desired roll/pitch outputs are fine
-the issue does not come from an external environment interference like a wind gust
-The PWM output imbalance is certainly not the cause of what you observed because this imbalnce is permanent and the observed problem happened ponctually for a brief moment. The imbalance is most probably due to the wind situation and maybe overall weight distribution of your ship.

What are the possibilities left of explaining the issue:
1-An ESC glitch that dezynchronized briefly causing the motor not to be able to follow the desired PWM out command from the autopilot.
2-A motor bearing glitch that seized briefly

I do not see any other possibilities right now. If others are reading this post, please help if you have any other ideas ?

an ESC glitch, or any chance you actually hit something in flight?

I would suggest that the ESC glitch is the most likely… is your ground wire connected on your ESC?

I was hovering and watching from 10 feet away so I would have seen it if there was anything to hit. The signal ground wires are all going to the Pixhawk.

I was wondering if anyone recommends having a ferrite ring on each of the signal cables. I built a couple of smaller drones years ago and my ESCs came with ferrite rings but I haven’t seen anyone doing that ever since.

Even though I didn’t have a camera attached for this flight, the OSD is always transmitting. I was just looking at the OSD playback where the glitch happened and I noticed a couple of things:

The increase in current during the glitch is probably due to the autopilot increasing throttle output to motors since the attitude of the ship deviated from the desired attitude.I’m not sure we could conclude anything else from that.

If you recall, these are the same motors that were getting really hot due to the defective Pixhawk 1 that I originally had on this ship. I never did figure out what was going on there, but as soon as I replaced it with a different Pixhawk 1, the problem went away.

Since then I’ve upgraded to the Pixhawk 2 Cube but the motors and ESCs are the same. I’ve always wondered in the overheating did any damage to the motors (or the ESCs) but I don’t know of any way to test that.

I’ve done at least a dozen flights between 20 and 40 minutes with the Cube but they were mostly battery tests or PID tuning or gimbal tests etc. I have a brand new set of 3508 motors and I think my next step will be to switch them out. What do you think about the ESCs?

Normally motors have magnets that resist very high températures (180deg C). Another part that can fail in a motor is the wiring or more precisely its insulation which can fail with too high of a temperature.

If you intend to replace the motors (that will eliminate any doubts about eventual bearing issues), you might as well replace the ESCs. For low KV motors (under 400) i usually use the Xrotor 40 amps ESCs which are as good as the T-motor ones but much cheaper.