Sudden crash in guided mode 4.0.3 (with log and video)

Appreciate the work done on the software over the years that’s made our project possible. For a University team project, we have designed and created a 3D printed seed planting drone with a web application for control.

After troubles with heavily unstable flight and motor inconsistencies due to a heavy drone and small props, recalibrating the motors and tuning the parameters as per the tuning guide helped get the drone into the air with steady flight. We have now moved onto controlling the drone with a dronekit python script, started from the web application. The flight was progressing well before it suddenly fell from the air and crashed breaking the frame.

I have attempted to analyse the logs but due to inexperience in reading them, I am struggling to pinpoint the issue. The battery was sufficiently charged and going by the video, nothing was caught in the props. Did a motor fail? Or sensors? A link to the video of the crash and the .bin file:

Would someone of more experience be able to assist please? Thank you.

Bonus question: We are not able to use the TFMiniPlus LiDAR due to it causing intermittent spikes into the thousands of altitude as soon as it is plugged into the i2c port. Resulting in bad barometer health warnings. Emlid has said they are not aware of the issue, I wonder if anyone has experienced this problem?

I believe it was a hardware fault with the back left motor. We will find out if it was the ESC, motor or PDB.

I dont think it’s that clear-cut. The motor outputs start with Motor 2 commanded to maximum and motor 1 commanded to minimum, then it changes to 3 and 4. 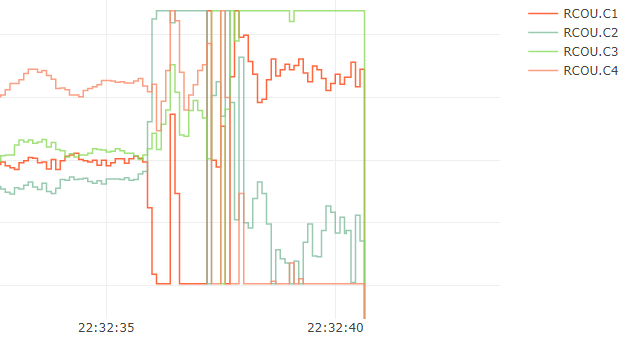 The attitude control looked good, but then Roll really went bad. it seemed like there was some sharp commanded yaw movements around the same time but I cant see where they came from.

Was there some radical shift in weight that caused all this?

Motors 4 and 2 were higher and lower than average to compensate for maybe a difference in ESC calibration or prop differences ?? Unknown actually. If it was a weight imbalance you’d expect 2 motors next to each other to be higher (or lower), not one higher and one lower. A yaw imbalance (frame or motor mount twist) shows up as a CW / CCW motor output imbalance.
This could have contributed to the loss of control. 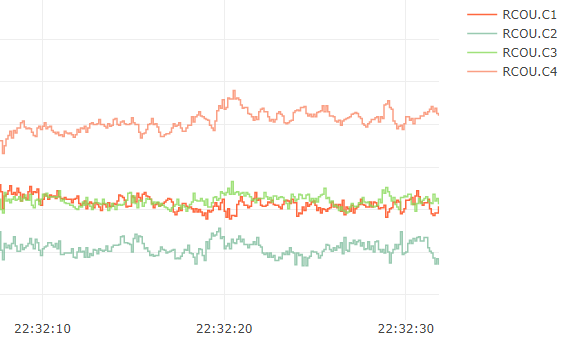 INS_ACCEL_FILTER seems very low, once you get flying again try a value of 20. You didn’t have bad vibrations, and in fact in the log all the errors and warnings happened after the loss of control - due to the loss of control.
Set all your battery parameters correctly.

Thank you for your detailed response, it’s much appreciated. After physical inspection, it turned out one of the soldered connections hidden under tape had come undone on the back left ESC. This caused the drone to fall out of the air as it did.

After repairing the solder and going back out to the field, the control and script worked perfectly, to much relief. Thank you for the advice on increasing the INS_ACCEL_FILTER, this was one of the parameters reduced due to large oscillations but we will increase it if the vibrations looks reasonable. Some of the other PID values may be able to be increased as well now we have stable flight.

Do you mean the BATT_… parameters such as BATT_CRT_VOLT? For some reason we cannot get a voltage and current reading from the battery through the Navio2 power module, maybe it is a hardware fault or a bad parameter setup, but we have followed the manufacturers guide with no success, we therefore didn’t put much time into setting up these parameters.

@ Welton Grove
Do you know the drone suddenly changes the altitude to Zero and crashes if you change the Guided mode to any other mode except RTL or LAND.
I don’t know why this thing happens in the Ardupilot. My drone crashed 2 times, later I checked using SITL in the Mission Planner and it always crashes when you change Guided mode to any other modes.
I think its Ardupilot firmware issue.

No, its a user issue. Your throttle input is probably zero. that commands the copter to descend. And that is what it does.

in mavproxy, and your issue will evaporate

Ah~ha, I get it. It’s so easy sometimes to overlook such an obvious thing.
Thanks a lot.