I am operating a Tarot 960 built for SAR use (auw 8kg or about 17 pounds). It uses the latest stable fw for APM 2.5 (3.2.1). It has been flying fine for quite some time until now (it has been well serviced and looked after). For the last few days I have had some strange “toilet bowl” behavior in loiter mode. What’s happening is that when I enter loiter mode, the hexacopter starts spiraling clockwise in larger and larger circles (and at the same time moving faster). It does this without any stick input. When I counter the movement it acts twitchy. As soon as I enter altitude-hold or stabilize mode it stops moving, and behaves as normal.

I heve redone the gyro and compass calibrations without any major improvement.

I am not new to analyzing the logs but I am sort of lost on this lone. I am sort of tempted to change the APM out for one of the Pixhawks I have in other test platforms but I would really like to understand what the problem is.

I have attached some screenshots from the log browser and the log it self (change the file ending from .pdf to .bin) 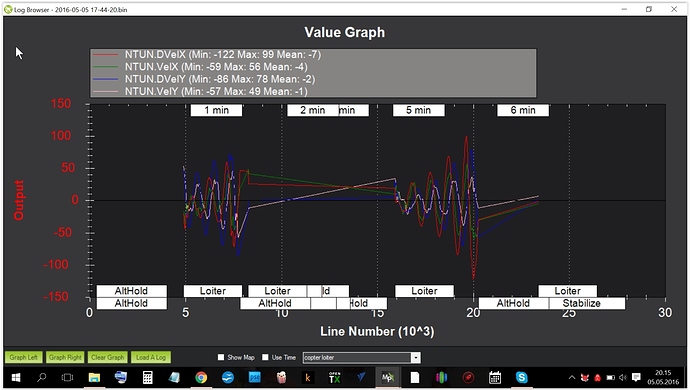 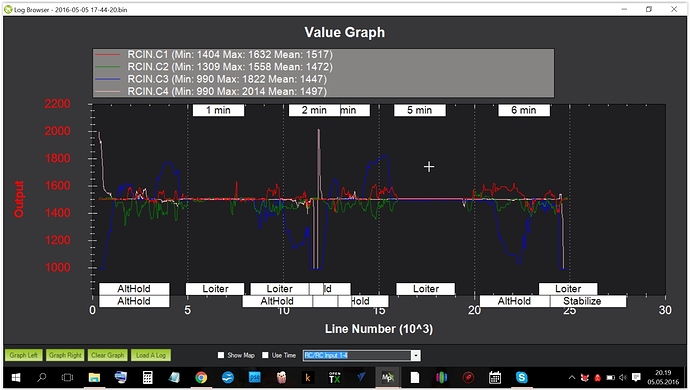 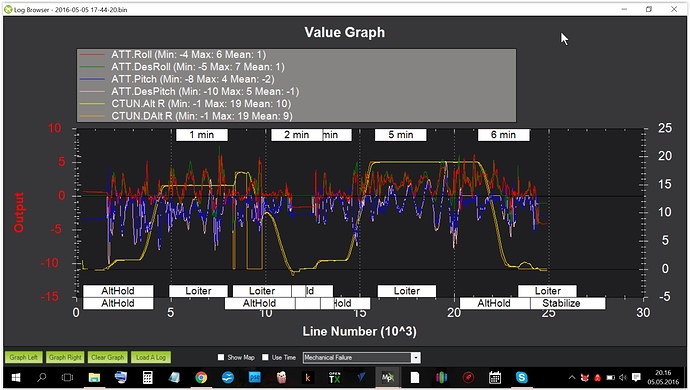 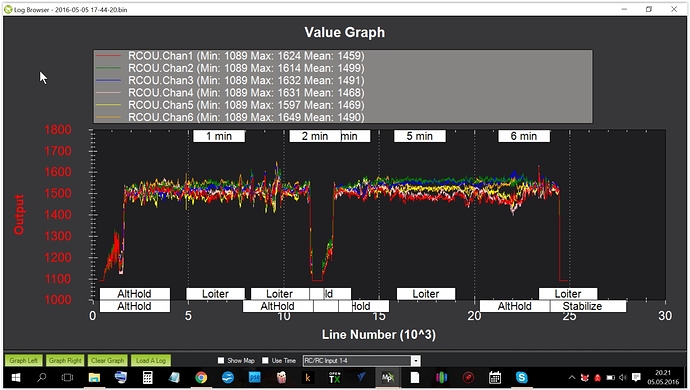 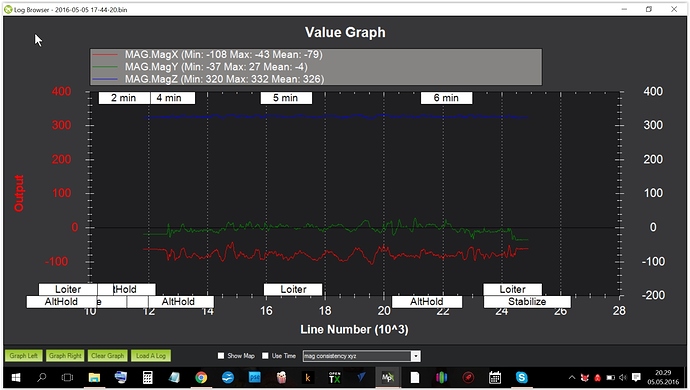 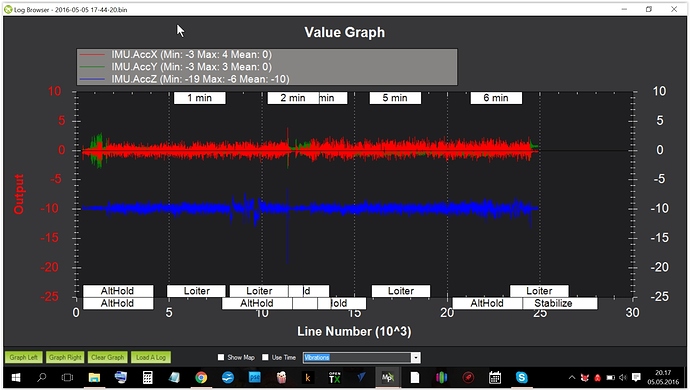 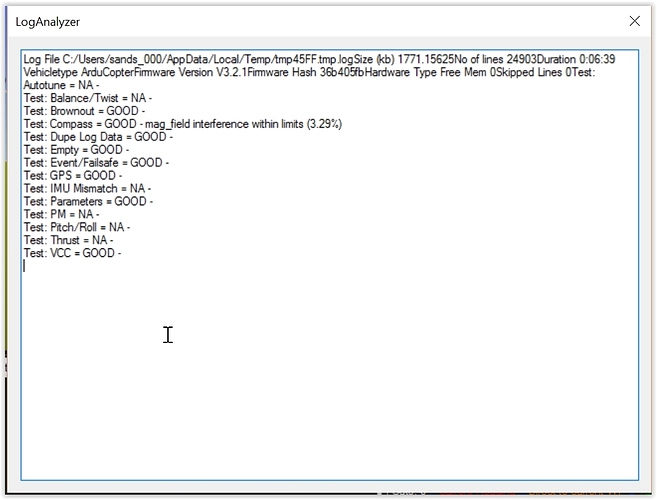 Pictures help to see the setup. Have you magnetized a nearby screw? it’s certainly something mag related. Is it pointing the correct way? Have you accidentally set the mag rotation in a param?

Thanks for the response guys. There are no new hardware as screws or similar fitted to the frame after the last calibration. All screws near the compass are plastic.I will check the orientation of the external compass again as a the machine was outfitted with a new m8n unit about a month ago. The strange thing is that it flew fine up until now.

Here is the gps/compass unit installed and it is oriented/configured as in one of the pictures (north facing forward + roll 180) http://www.readytoflyquads.com/mini-ublox-m8n-gps-w-35x35mm-mounting-backplane-and-compass

Check it with the HUD and turn the unit and face it each direction to make sure the compass direction is correct on the HUD.

Thanks for the suggestion, but I have done this and the hud is leaning the correct way when tilting the copter

Thanks, I will check that tonight.

I have checked now and the compass is pointing in the correct direction, as I turrn the hexa from north to east and then to south

I might try to change out the gps/compass unit for a new one (same type) and test again.

Keep your gps/compass unit. Connect to mission planner, and then have someone walk in a large circle (about 20 m minimum). Look at the GPS and compass bearings (black &red). They should stay pointing in the same and correct bearing throughout the circle. If they do not, you need to calibrate your compass. If they do, remove rotors, arm aircraft, and have someone repeat the walk as you command ~50% throttle. Again watch the GPS and compass bearings. If they now differ significantly, perform the more advanced motor compass calibration.

Thanks for the tip Ronald

After doing most of the suggested tips here and some more (like changing gps/compass and adding a ground plane) I could not get ridd of the “toilet bowl”. The hexacopter had previously flown OK for more than a year.

I felt I could not spend any more time investigating this and took the time to swap over to the pixhawk fc running fw 3.3.3 (On a side note; I have been using an other pixhawk in a smaler 550 size hexacopter test platform, with great success for more than 6 months). At the same time I added more led lighting and swapped the current sensor from the attopilot to the new mauch sensor.

After the swap, the toilet bowl is gone and the logs look god to me. I would even say it flys better with the pixhawk than it has ever did with the apm.

A few pictures of the “bird” 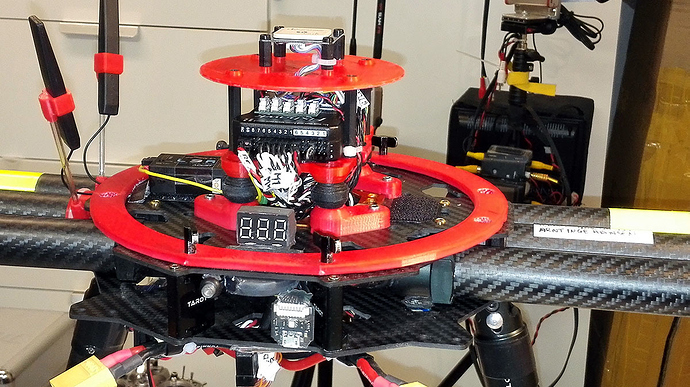 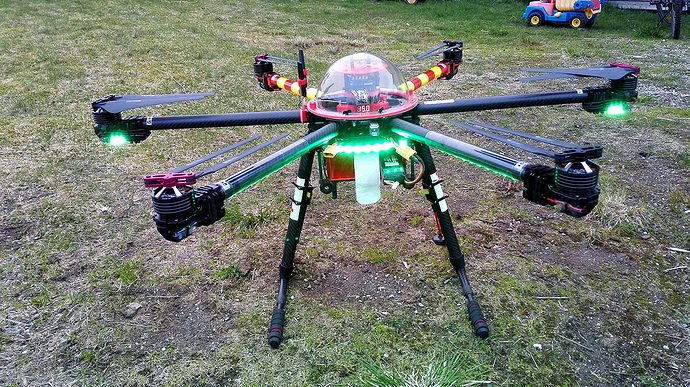