Yesterday, a friend & I were attempting to test a new build (tricopter w/ pixhawk mini, Copter 3.5 rc4) of mine. After plugging in, I got an error saying “Gyro not calibrated.” I went through the steps to calibrate but after calibrating the compass, the gyro message disappeared.

Once in the air, we started with trying to tune hover. My pilot friend was able to hover briefly but after about 30 seconds or so, he had to throttle up to 100% just to stay in the air but even then, we saw the multirotor float down rather slowly & then hit the ground. On the tuning tab of QGroundControl, we raised the “hover” slider each time we came down, thinking that the throttle wasn’t high enough. On the final flight, I saw that in the beginning the throttle stick was about at 50% & we had good hover. Within seconds of noticing this my pilot buddy again had to keep raising the throttle to keep in the air until he was at 100%, with the craft drifting to the ground like we had seen in the previous flights this same day.

I have included the log because I am inexperienced at examining them. I know the motor/prop/esc combo to be good but I am buying a thrust meter & stand just to be sure. I have no idea if I am looking at voltage sag, a bad TX, or what?

Can someone take a look at the log & extrapolate clues as to what we experienced?

Many thanks in advance!

It could just be that the vehicle is under powered. i.e. needs higher kv motors, larger props or a higher C battery.

There’s also a motor imbalance that could be contributing to the troubles. In particular the back motor (motor 4) is having to work really hard so maybe the COG is too far back. 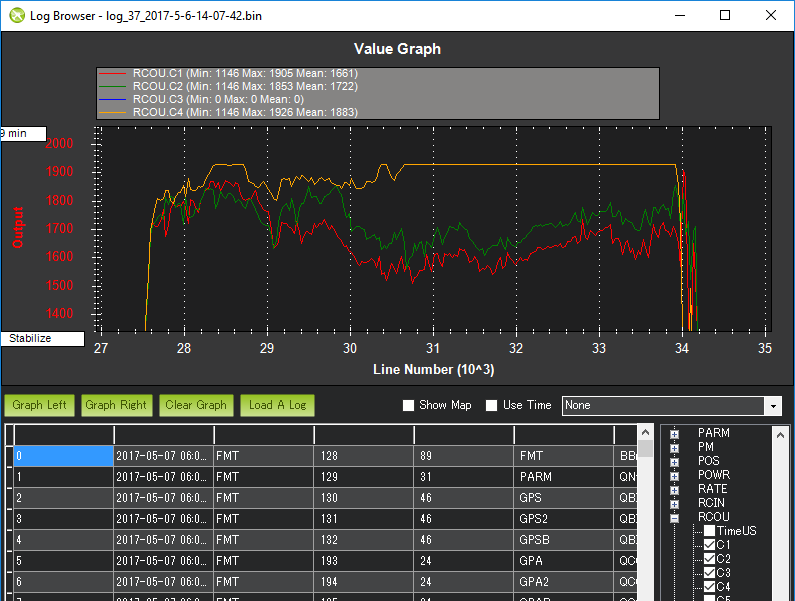 By the way, for new builds, we generally recommend using the latest stable release. The reason is that this separates the beta software testing from the regular setup and configuration issues that people encounter. Adding these setup and config issues to the discussion at this point clouds the waters between what are real software issues and regular support.

Thanks for using ArduPilot!

Thank you for your help, rmackay9. I wish I had a stable firmware to use, as I am using the Pixhawk Mini.

PX4 has a strange tricopter bug in it where the tail servo yaws all the way to starboard on power up. You can hear the servo trying to push past its limit & I don’t want to burn up the servo. After arming, the tail yaws quite gracefully but it takes a few seconds of servo grinding before you can arm. I feel it is a safety issue that I must arm to prevent damage to the tail servo so…

Anyways, this isn’t an Ardupilot issue, just thought I would share. Looking forward to a stable 3.5 release! Thanks for all your hard work!

Also, I understand how a servo works & a 1.5ms signal puts my tail servo (almost) straight up.