Loaded up the rc4 version for the sanity check as I had a corrupt parameter in rc3 which resulted in a crash. So I get EFF2IMU1switching to compass 0 and back to 1 eighteen times in one flight. No mag field difference. Doesn’t affect the flight path either. Finished the mapping mission without issue. Anyone know what’s going on here? This was the second last flight of the day. It had been mapping all day without issue until this popped up. First day working with the rc4 version though. I had tested it for half a dozen flight before putting it to work, again there was no problem. 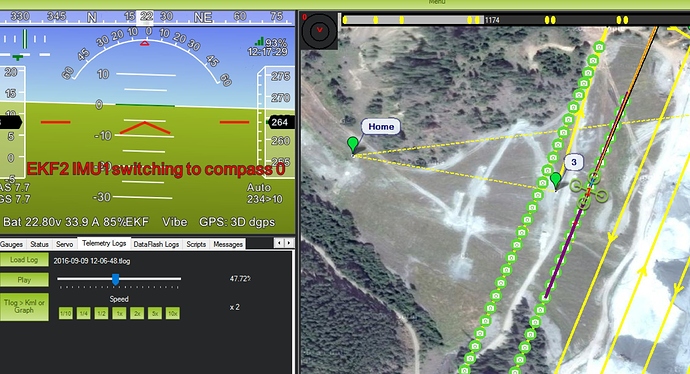 Anyone? Kind of reluctant to put this bird back to work.

I´ve seen the log. It seems that EK2 imu1 had trouble with yaw solution. The normalized innovation for imu1 was higher than imu0 all flight. Since I haven´t found anything that indicates some discrepancy among mag0 and mag1 readings, that could be something else, like vibrations.

You´ve mentioned an crash. How was your vibrations before the crash?

Other thing that I have noted is that your first motor ( ch5 ) is outputting less power than motor 4 ( ch6 ) consistently through entire all flight. I would expect similar values for a well balanced cg.

I´m not jumping into any conclusion since I haven´t enough knowledge of ek2, but it could worth it to check those two aspects.

Maybe @rmackay9 could have a look and diagnose it better.

I appreciate the feedback. cg is spot on and vibrations are, ok. X and Y are low, but Z axis approaches 30 sometime but not often. Never any clipping though. What I really need to know is what all this really means. Is there more in-depth documentation to learn what the heck things like “normalized innovation for imu1” means lol? Really, I need a much deeper understanding of what’s going on.

Hi there, I’ve ping’d Paul Riseborough about this to get his opinion. I’m not sure if it’s a normal thing that we should demote to an “info” instead of a “warning” or whether it’s really serious in which case we should also log it to the dataflash.

We are downgrading this message to INFO for -rc6. There’s a couple of other small EKF fixes we need to put in AC3.4 so there will definitely be an -rc6.