Dear Ardupilot community,
it’s my first post here. I’m new to Ardupilot and I’m trying to understand some Ardurover source code (I’m reading version 3.2.0-rc3). My question is about the following function in mode.cpp
void Mode::calc_steering_from_lateral_acceleration(bool reversed)
I see that that function calls get_steering_out_lat_accel, which does the following

// return a steering servo output from -1.0 to +1.0 given a desired lateral acceleration rate in m/s/s.

Then the steering servo output is multiplied by 4500:

the -4500 ~ +4500 range is a historical thing dating back many years. The range is a bit meaningless and we can certainly change it to -1 ~ +1 in the future. In case it’s of interest, it stems from a historical limitation in the Plane code (which was the first ArduPilot code) in which full left or right roll (or pitch) led to a 45 degree bank angle. Way back then, we were using AVR boards and the developers thought that using integers would be faster than floats so they used centi-degrees instead of degrees or radians.

Great that you’re looking at the code. We’re always looking for more developers to get involved. Here’s a section on the wiki that tries to explain some of ArduPilot, I suspect you’ve already seen it but just in case.

Thank you very much for your answer rmackay9!
Despite the range -4500 ~ +4500 (which is just a matter of unit choice, after all), do you think that the physical meaning of wheel steering angle can be attributed to the argument of the set_steering function?
Using Ackermanm steering model, the wheel steering angle is in practice angle ϕ in the following figure. 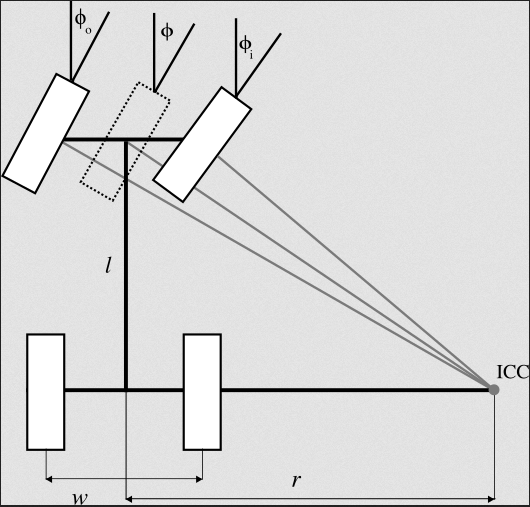 image.png530×507 76.9 KB
Is my understanding correct?
Here’s an excerpt from AP_MotorsUGV.h

I think that the quoted comment can be made clearer. Thanks again!