Spontaneous RCIN signals on all the channels Copter 3.5.2

I have encountered an interesting issue! I was flying my arducopter 3.5.2 in auto mode, controlled by GCS, and suddenly the drone started to spin over YAW axis. I only managed to stop it by pressing pause on the GCS.

What I found interesting in the logs, you can see it on the screeshot 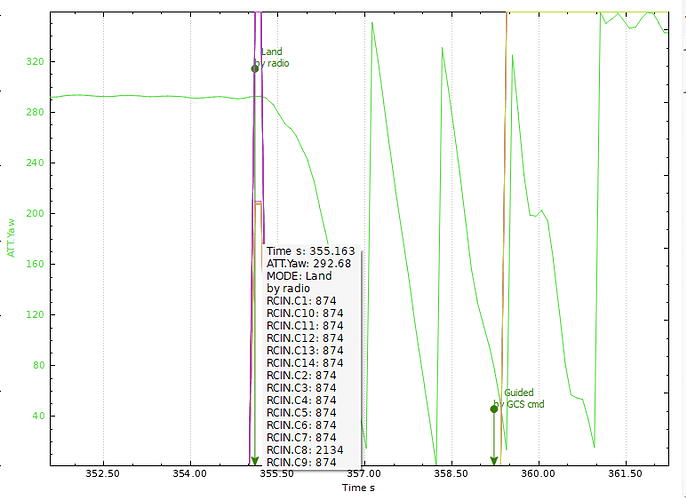 At some point, All the RC channels have received some random value of 874, and only C8 got 2134

Suffice to say, that there was no RC receiver attached. The PPM sum physical input was left opened.

So as I’m thinking, what could be the cause.

Maybe someone expirienced something similar.
Looking forward to any possible advises.

Thing is, as I wrote, I didn’t use any RC receivers.
I only used telemetry link on serial_1. So all the control of the drone was held via mavlink

I’ve had a case where sending an RC override command on channel 6 from DroneKit triggered fast yaw spin followed by crash. That happened in Guided Mode. Once I removed the RC override command, the spinning disappeared. That looks very similar to your issue.

Indeed it is similar! Have you got a log from that flight? What was assigned to your 6th channel? Were you able to replicate such behaviour?

That was over a year ago so I don’t have a log from that flight. I had a servo connected on the pixhawk’s channel 6. The behavior repeated itself over and over until I modified my code. I haven’t been able to figure out why an overrride on channel 6 triggered a yaw spin but as soon as I removed the override in the dronekit code, the spinning stopped.

To fly the drone I’ve replaced all my rc override statements with velocity commands and yaw commands in the dronekit code. Works way better! What are you trying to achieve with your drone?