I prepared a spline survey with Tower that I must fly on a nice day this coming week. This is what Tower shows for the ground track of the aircraft: 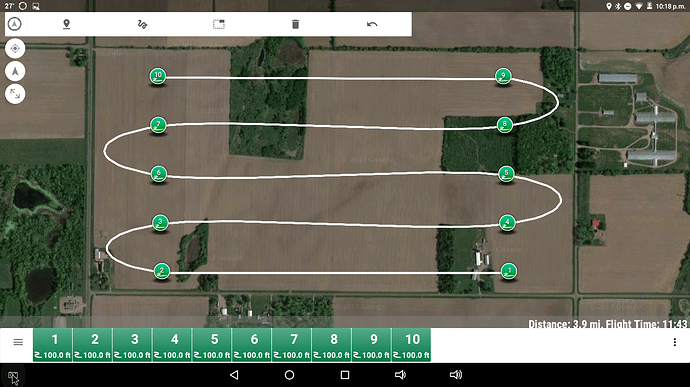 Just to double check, I loaded the same mission into APM Planner2 and checked it. This is what it looks like in APM Planner2 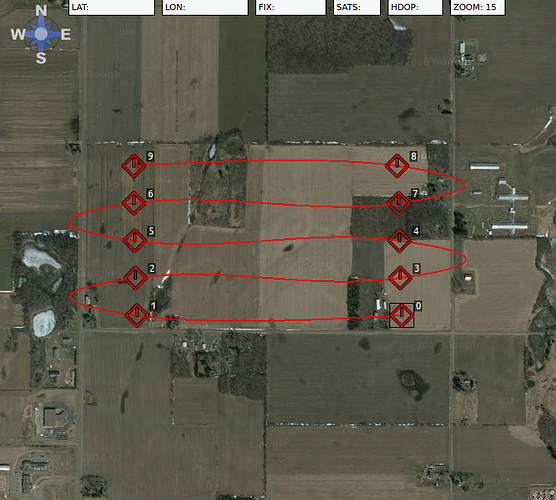 This one is critical to know what the actual ground track is. Between waypoints 2 & 3 (or 1 & 2 in APM Planner2), if the aircraft actually crosses the state highway like APM Planner2 shows and makes the turn over the woods there’s a high risk chance of coming into contact with some pine trees that are ~100 feet tall. Which one is displaying the correct ground track?

The two planners show their calculated tracks according to respective algorithm.

If you want a protection from trees and highway, you have to add a point in the middle of each turn.

Thanks Marc. I’ll put a point on the turn where there is potential conflict with trees and leave the rest as-is. I want to know which algorithm the flight controller uses for future reference. 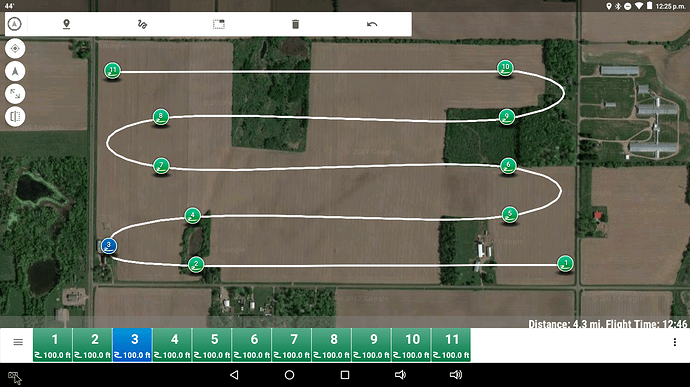 However, this is what APM Planner2 says it’s going to do: 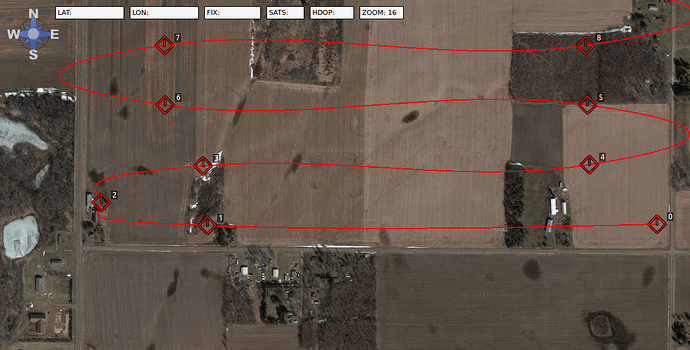 I’m flying the flight this afternoon. It’s just a snow cover evaluation flight for a watershed project. So I’ll know more after I fly it. At least both agree that it will keep the aircraft out of the pine trees on the edge of the swamp. Being it’s a fixed wing VTOL aircraft, that turn is less than ideal if it flies it like shown in APM Planner2. But the aircraft can deal with it at 20 mph flight speed. So we’ll run with it and see what happens…

What I found out today when I flew the flight (twice) is that with the WPNAV_ACCEL param set to 100 the aircraft flies the turns the way Tower shows them. As the aircraft few the flight I observed it adjusting speed down to ~16mph, and turn radius to limit G-forces in the turns to 100 cm/s^2.

I only burned off 29% battery on the flight. So on a whim I set WPNAV_ACCEL to 300 to see if what I suspected is true. It was. At 300 cm/s^2 it flew the turns like APM Planner2 shows them, although it “chopped” off the turn just a tiny bit on the apex of the unmodified turns and kept the speed closer to 20mph.

Although I don’t think it matters, I am flying a rather unique fixed wing aircraft with 'Copter 3.4.2. What does matter is that I think I have come to the realization that when WPNAV_ACCEL is set to a low enough value and a flight with relatively tight turns is flown at high enough speed, the Pixhawk will modify the path of the spline turns to keep the horizontal acceleration within the limit that is set.