I have a Pixhawk4 and a Spektrum AR8010T receiver. Receiver is connected to the Pixhawk as shown via the SRXL port on the receiver, no other peripherals attached, just powered via USB. I get the first 4 channels coming in strong, no glitches or anything. 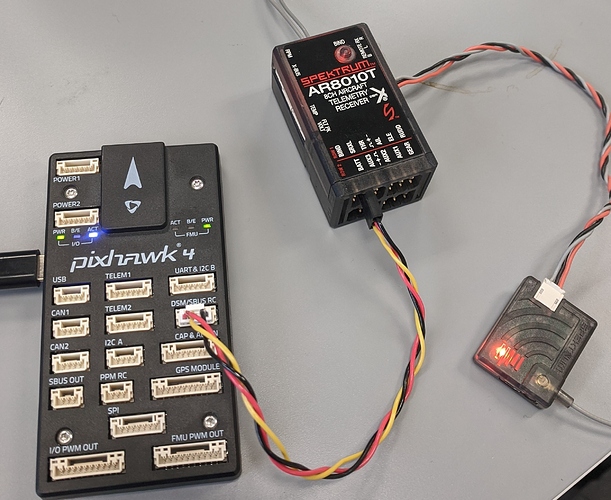 The issue is that every time I power up my setup, a different channel between 5-8 stops working. Sometimes they just read zero, sometimes they are stuck at 2000us, but either way they don’t respond. So for example, I turn everything on and channel 5 isn’t working, 6-8 work perfectly. I power cycle everything, and now channels 6 and 7 don’t work, 5 and 8 are fine. Mission planner display and dataflash logs for the effected channels just show zeros, or sometimes a fixed PWM that doesn’t respond to inputs.

When I connect just a single Spektrum remote receiver on the same port, everything works perfectly.

Anyone seen this before? Is there a stable release of copter to allow me to use SRXL with a full spektrum receiver? I’d rather not use just a single remote rx or a single SRXL2 receiver, this seems like it almost works!

Arducopter 4.0.6? Can you power it with a battery instead of USB?

Yes, but it also happens with 4.0.3. Tried using battery power and power management board, no change.

UPDATE: Issue seems to be when I power cycle the receiver or the transmitter. With the Pixhawk plugged in and connected, if I turn off my transmitter and turn it back on, different channels no longer function. Same if I keep transmitter on and unplug/re-plug in receiver. Does this mean RX is suspect?

Just wanted to inform I got my DX8G2 with AR9030T working with Arduplane 4.0.9. I am using the SRXL port on the receiver connect to the RCIN port on the pixhawk4. The error I made was the binding between the transmitter and receiver must be 11ms frame rate, not the default 22ms. Once I rebound, all channels are working!

I think this is the issue here - * https://github.com/ArduPilot/ardupilot/issues/12389