I’ve been looking at some data from my depth mapping boat, and it seems to have a lag/delay in the depth data. With a back-and-forth route, the data looks to be shifted in a way that makes sense if the depth data is lagged (or filtered heavily which is probably the reason).

I was wondering if anyone else has seen this before? I will try this route again even slower in the next few days to compare. My boat was only going 1 m/s (2 kt).

I’m using an airmar P66 (DST800 but transom mount) NMEA 0183 sensor, which goes into a raspberry pi connected to the flight controller and running pymavlink based software. There are no configuration options with this sensor that I know of and it gives measurements at 1 Hz. My code grabs the FC position from mavlink when a depth reading comes in so I don’t think there are significant delays there.
Maybe I should wire the sensor into the FC and compare with the onboard datalogging? I might need to try something like the Ping as a solution, what do you think? I’ve seen @John_Easton 's boats going pretty fast but maybe with an integrated survey GPS/depth system they can compensate.

In the colors-only plot you can see how the northerly pass depth changes differently (more white because it starts shallow) than the southerly passes (more blue because it starts deeper). I added an arrow to show the direction of the route. The second image has the depths labeled (in feet). Raw data is uploaded to github during the mission and I plotted in QGIS.

Thanks for any ideas,
-Mike 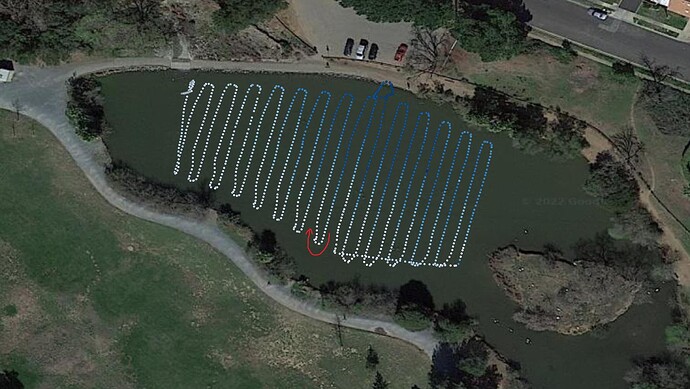 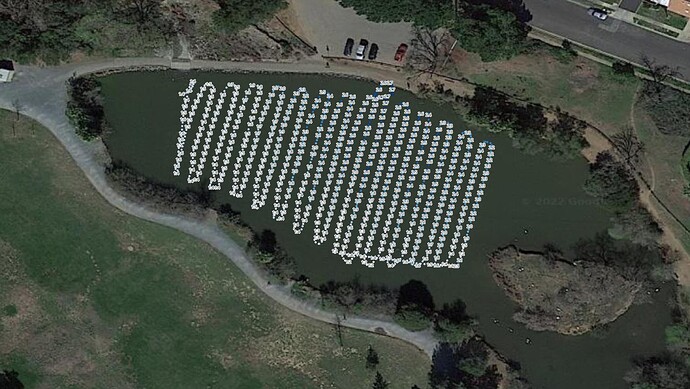 That is very peculiar at such a slow speed. I get that if the transducer angle is off, especially in deep water and causes major problems often resulting in a new scan completely.

I suggest getting a small 5" fishfinder and do a proper setup and you should be fine.

do you have some photos of how you have mounted your transducer?