I had flown the flight path (obvious pattern in the attached picture) or something similar, for nearly 15hrs over 3 days prior to the flyaway. I tuned the basic PIDs (autotune) and TECS and Nav Controller in the early hours and was mostly putting time on the aircraft and working on tuning the gasoline pusher engine. The aircraft was navigating very well, in my opinion, short of some altitude variations but it was an extremely convective day and it had flown very smooth in the early morning air. Being gas, it is fairly easy to keep tabs on the aircraft location and health and I was monitoring it from my little ground station outside (card table with laptop and RC Tx) Well into my second flight of the day I thought the engine had died, and when I looked to where I new it was, to my surprise it had not made its 90 deg turn to waypoint #2 and was simply so far away it was hard to hear! I glanced at my laptop and it appeared that I had lost telemetry (not true) so I quickly looked at the signal on my tx (TBS Crossfire) and saw that I was still connected. I couldn’t see the aircraft anymore when I looked back up so I manually initiated failsafe (Qland). That’s when I noticed that I still did have telemetry stream, and could see the aircraft location. I drove my car to retrieve the aircraft (which survived in pretty good
condition actually)

I seems to me that the FC was very aware of the fact that it was not heading towards and was getting farther and farther away from its next waypoint?

It was not a mechanical failure, all surfaces still work.

So short of the bad compass health which doesn’t seem to affect performance much in FWD flight (thanks EKF?)
Anyone have any ideas on why this may have happened suddenly to an aircraft that has been very reliable?

Ill link the .tlog as soon as it uploads 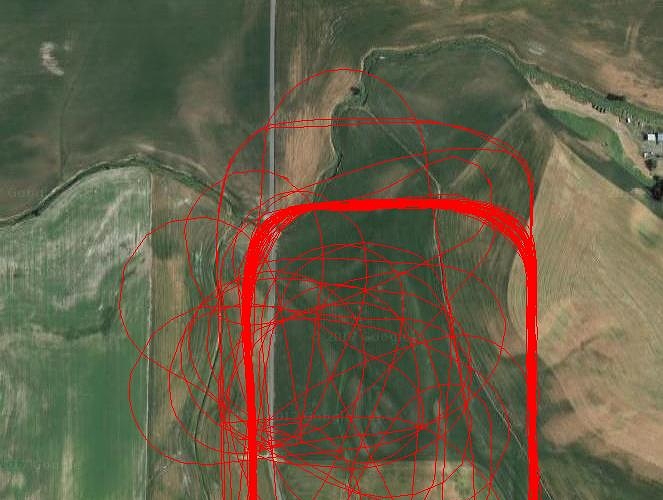 Any insights would be appreciated.

Thank you . 587 MB I think. I should reboot the controller more often, but that log is only 1/2 a tank of gas and it charges its own batteries in flight, so no need to!

that log is only 1/2 a tank of gas and it charges its own batteries in flight, so no need to!

sounds great! Maybe you could do a post in the blog section about the plane?

I’ll look into it.

I’ve found the issue. While flying in AUTO the LIM_ROLL_CD parameter was changed to 45 from 4000. That limited the maximum bank angle to 0.45 degrees (it is in centi-degrees). My guess is you were using MissionPlanner and found the interface a bit confusing?
We’ve had this problem once before, and at the time I added an arming check to not allow arming with a NAV_ROLL_CD below 3 degrees. It doesn’t check it after you are armed though, so as this was an in-flight change it took effect and made it turn very very slowly.

btw, it would have eventually come home, it just would have had a turn radius of around 10km. It would have been very difficult to line up with the landing location however!

I had actually changed that parameter previously and was attempting to change it back. Although I am not a Mission Planner expert, I was aware that the parameter is in centi-degrees and previous changes to the parameter had returned predictable results. I believe I changed it in the “basic tuning” page and it was very likely a number pad typo. If I did change it in the full parameter list, it was simply an unfortunate brain lapse.

I am ashamed to say that I had totally forgotten that I made that change. I remember now that as I hit “write params” I had received a phone call that I answered and shortly there after realized the plane had not made its turn. I of course dropped the phone as I attempted to remedy the issue. Apparently the the shock of watching the plane fly away dampened my short term memory.

I made many small changes that day, but none of them (intentionally) large or drastic, just fine tuning.

Embarrassing, but in the end I’m glad that it was not a FC issue, as that would be more disconcerting.

Apparently I need to stay more focused while flight testing, double check parameter changes and verify flight performance, even when they are not “big” changes.

tridge, thank you very much for your attention to my issue, I still have much to learn.

tridge, hank you very much for your attention to my issue.

no problem, it’s fun tracking down issues like this!