Hi all, I’m new to Ardupilot and I did an interesting VTOL tilt rotor plane, the first test was simple but ended in a crash. The weight of the plane was 1330g but using X4 9" propellers. Using Q_Hover I took off and the plane just shot to the sky and I just moved the throttle a bit up, immediately I moved down again but it continued to climb, look at the .log file. Then I don’t remember if I disarmed or it entered in failsafe and felt donw.

Next day I fixed the airframe a bit to do another test, this time I used a 3S battery, and Q_stabilize. It flew as intended this time.

My conclusion is that the power of the 6S is too much but at the same time, shouldn’t the software should compensate for that? I’m not sure if I need to tweak or activate a parameter for power monitoring, etc.

First of all, welcome to the VTOL section. Hopefully not too much is broken

The main reason for the crash might have been that you reset the arming check from 1 (check all) to 64 (only RC input).

With ARMING_CHECK set to 1 you could not have started, as long as among other things the EKF system was not yet ready. EKF was not ready at any time during the short flight. Only a while after the crash, lying quietly on the ground, the message “EKF2 IMU0/1 is using GPS” appears. For a while you had no GPS reception at all. 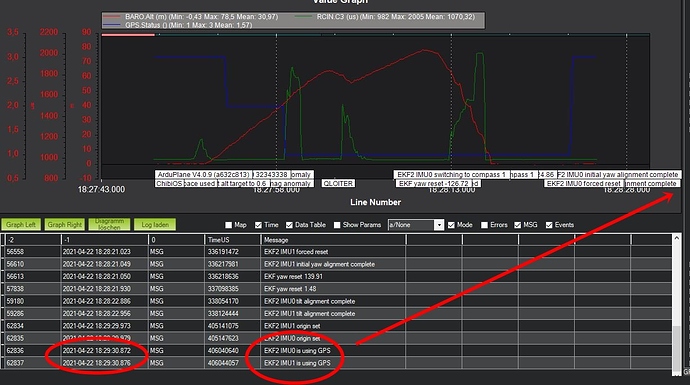 Second problem: At the very first test flight never start immediately in QHover, but first in QStabilize. In QStabilize you and not an perhaps incorrectly initialized EKF2 have throttle authority.

Thank you so much! That bit of information certainly helps, that was the first time the GPS was used so I guess I had to wait longer for a GPS lock, I’ve flown it some more using Q_stabilize and a 3S battery and it was a lot better, but I want to use the 6S, I might be using large propellers for the motors I’m using.