I stopped in Nebraska and Kansas while visiting the US to help a young friend in Nebraska with his first quadplane build. We could use some help analyzing what’s causing it to toilet bowl on lift off.

First time we took off in QLoiter and it just rolled to the right and crashed. After repairs, we recalibrated the ESCs, did an accel calibration and the compass dance.

On the next test I took off in QStabilise. It was flying level but started to drift around me to the right. I thought it was just the wind so I switched to QLoiter but it continued to go around me nose out. As it circled around me the rear of the plane hit a tree which knocked the GPS off the airframe which was dangling from it’s cable. I increased the throttle to get it out of the tree and attepted to go in to FBWA thinking I might be able to use forward flight to get out of the unstable vertical lift. For whatever reason the forward flight motor didn’t kick in. So I let the plane come around as it was now heading for an empty field. I let it descend a bit but it was rolling quite a bit. I waited until the wings were level and cut the power so it would land on it’s belly. That worked out well as the airframe didn’t have too much damage. It did however break the motor support bars and we didn’t have spares.

I’ve left Kansas now but I think with a bit of help from other members here that my friend will be able to get the plane flying by himself. The log from the flight is available here https://www.dropbox.com/s/2b1wnvxj3007u5v/00000108.BIN?dl=0

I suspect the issue is either mag interference or vibration issues.

TIA, really appreciate the time of anyone who can help out.

hi Darrell,
From the photo it looks like the compass is pointing forward and right way up, but COMPASS_ORIENT is set to 8, which is ROLL_180. It should be set to 0. There are also signs of strong magnetic interference.
Vibration is also very high, and the IMU is clipping at times.
The battery voltags shows as dropping to 2.9V/cell when you entered FBWA mode. That is much too low, and you risk ESCs cutting out. 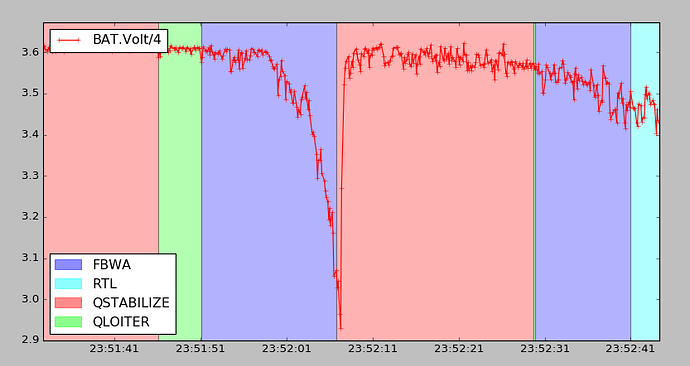 Thanks. I saw the 180 setting and thought it was odd. We decided to move the GPS from being so close to the motor and put better better anti-vibe on the Pixhawk so I’d say we are on the right path and should have be successful next time around. Thanks very much for the help. The next test flight won’t be for a while because he’s waiting on parts but I’m sure he will send us a video.

I should mention that the power module was connected only to the forward motor. He has separate wiring for the forward and vertical motors. So that dip is for the forward battery only. His batteries are a bit old so he is replacing them. However it was an eight amp 30C 4S battery which should be more than enough for a single motor. I suspect the power module needs to be calibrated as well. We did measure the draw of the vertical motors at 50% which was around 50A which is being supplied by two 5A 4S 25C batteries in parallel.

With all these improvements I think he will be successful next time around.