Built a SingleCopter and got it to fly well with a Matek F411 controller so I know it is aerodynamically capable.

I wanted to add a real autopilot capability so I replaced the F411 with a Pixracer, GPS/compass and ArduCopter. Set up all as described in the documention, except that I pointed the Pixracer up and used AHRS_ORIENTATION of 90 degrees instead of 270 as stated.

After a few very brief flight tests I almost got it to fly. I had to reduce the Stabilized Yaw and Yaw PID P rate in half to stop the oscillation in yaw.

The next problem is for some reason I have very little right aileron throw. As a consequence the machine eventually rolls to the left more and more until it crashes.

The four flaps seem centered (I tilted them all one way a little bit to compensate for torque created by the prop).

Here is the end of a test flight after a graceful arc to the left, with its center dowel poked into the soft ground,ejected battery on the ground: 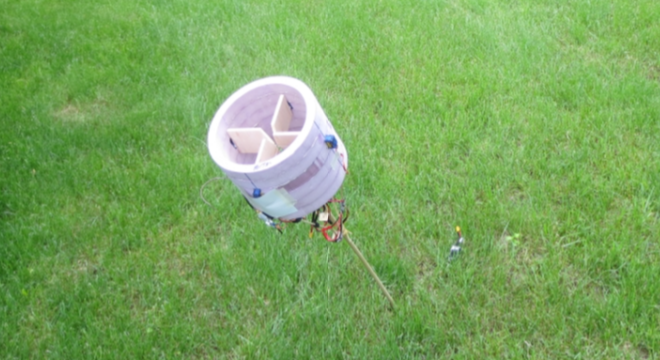 A flight log from the controller would certainly help to identify any problems.

I will include a log after a few more tries of a few more adjustments. I centered all of the flaps again, increased the stabilization gain for pitch and roll, and lowered the yaw P some more (it was still jittering in yaw).

Thanks for pointing out the aerodynamic problems with flat plate surfaces. That notwithstanding, the exact machine flew well with an INAV controller so I know it should work. I just haven’t gotten to the best settings yet for Arducopter (I hope).

I suppose if all else fails I could taper the surfaces as a last resort.

Thanks for your help,

Ok, had a few more tests. On the last one I never let go of the machine and felt and saw something wrong. I can hold it by the dowel sticking out of the top and get a pretty good feel for how it responds to controls and self-leveling.

I’m pretty sure that when I gave it right roll, it began to yaw to the left as if I gave a left rudder command.

I’ve attached the DF log and will appreciate if you can point me to a configuration or other problem.

I thought of something else. The Pixracer flight controller is mounted pitched up by 90 degrees with the arrow aiming up. In that orientation roll becomes yaw and yaw becomes roll.

(2) Also, I could only get the horizon to react normally when I configured as AHRS_ORIENTATION=24 (Pitch90), and not AHRS_ORIENTATION=25 (Pitch270) as directed in the documentation. Could this be part of the problem?

(3) What is the proper way to calibrate the accelerometers? I performed the calibration using the Pixracer’s case and the arrow on the case as the reference for up, down, right, left, right-sideup and bottom up. Then after installing the Pixracer in the machine pointing upwards I adjusted the AHRS_ORIENTATION parameter.

(4) Does it matter that my single motor is actually spinning clockwise instead of counterclockwise?

I just saw that we have a dedicated SingleCopter/CoaxCopter section. If it is possible can someone show me how to move this thread to that section?

It does sound like an orientation problem.
Can you mount the FC flat as it would in a normal copter?